Do you remember that complete workers’ comp overhaul from a few years ago?  The one that was supposed to deliver cost reductions, streamline and create efficiencies for benefit delivery, while increasing claimant benefits and passing savings on to California businesses?

Quick question: at what point can we expect to see claim costs go down?

Is anyone else as frustrated with the system as I? That was a rhetorical question of course, as the answer is most likely yes!

California continues to rank in the top tier with regard to the amount of average workers’ comp claim costs. In April, the Workers’ Compensation Insurance Rating Bureau (WCIRB) released WCIRB Report on December 31, 2013 Insurer Experience. The report captures the 8th consecutive year of new highs for the projected ultimate total cost for a lost-time workers’ compensation claim in the state. The projected 2013 average cost of a claim is now at $86,946, a new record high up from the 2012 high of $85,723 and 58% higher than it was in 2005.

And despite the recent SB 863 reforms, written premiums in the state increased 18% to $14.8 billion in 2013, while early estimates on losses are projected to hit $12.5 billion, the highest since 2002. What’s fueling these new highs? According to a recent study released by the California Workers’ Compensation Institute (CWCI) reviewing data from Accident Years (AY) 2005-2010, the number one factor associated with increasing cost trends is claims with attorney involvement. This finding is obvious to all who have seen the impact on a claim when an attorney enters the picture. Claim costs materially increase at this point largely due to the routine amendment of the claim through added body parts and ailments, which often result in a significant increase in doctor visits, treatment, prescriptions and the opportunity for lost-time and permanent disability. Accordingly, this single variable has a substantial ripple effect throughout the system.

The CWCI study also took a look at the average cost of a claim where permanent disability (PD) and attorneys were involved. Among PD claims, those with attorney involvement average $66,208, or more than 2 ½ times the $25,300 average for PD claims without attorney involvement. Incredible! 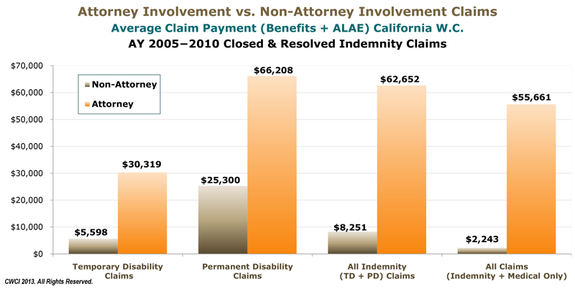 The disparities in litigated vs. non-litigated claim costs can also be seen in the average number of lost-time days. Because PD cases comprised the vast majority of claims that involved attorneys, it comes as no surprise that the average temporary disability (lost-time) days were four times higher on litigated files, versus claims without attorney involvement: 122.8 vs. 30.6 respectively. 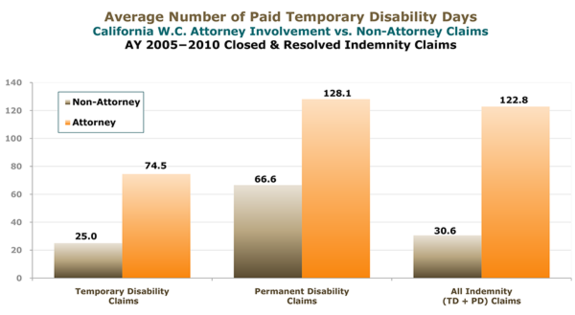 These are significant cost differences and leave a lot of desire to keep claims out of the litigation arena. It’s also clear that employers with robust safety and return-to-work programs that have senior management support tend to have the best opportunity in mitigating the chances of litigation and other soft costs associated with industrial injury claims.

So, regardless of your geographic exposures, these trends are important to note because they impact overall claim costs and insurer profitability, which in turn influence the insurance rates that affect every business. As you consider the aspects of your program that are out of your control, keep in mind that your program design and claim management practices are key to mitigating the costs associated with these rate increases. Make sure you carefully consider your risk management partner. Find a partner that understands your organization, tolerance for risk and can help you focus on short and long term goals that improve your risk profile and lower your overall cost of risk.