The D&O litigation landscape in 2016 was a tough one. 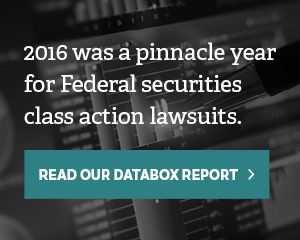 Here at Woodruff Sawyer, we look closely at securities class action suits when analyzing D&O-related litigation. In our analysis of these types of lawsuits, we look specifically at claims brought pursuant to the ’33 and ’34 acts after a stock price drop–a high-severity risk faced by directors and officers.

In Woodruff Sawyer’s latest analysis of securities class actions filed in federal court, we found a record-breaking 195 cases filed last year—a high predicted in our 2016 mid-year report. This is, in fact, a 10-year high, up approximately 9 percent from 2015.

Get instant access to the “D&O Databox Flash Report” for 2016 right now, click here. Read on for more details … 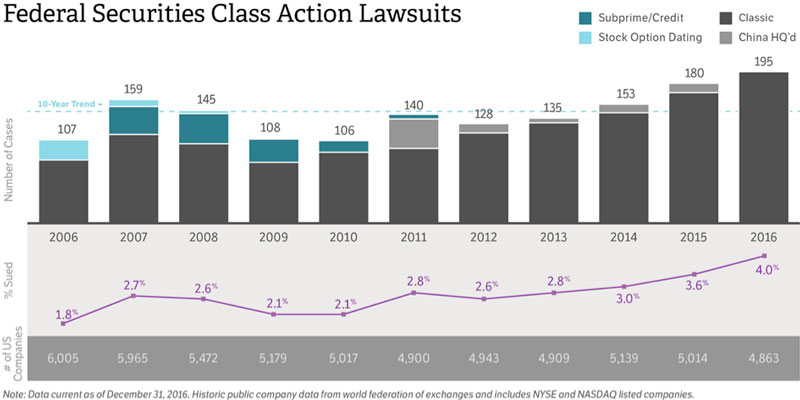 The culprit? One strong driver was IPO activity. IPO companies are particularly exposed to securities class actions as they transition from private to public for a number of reasons.

Approximately 20 percent of the total number of companies that went public in the past decade had been sued. Ninety percent of these companies were sued within the first five years of going public.

It’s worth mentioning that 12 percent of these class actions were Section 11 cases against IPO companies filed in California state courts—something I’ve written about before in this blog.

A large number of the 2016 cohort of companies faced with a securities class action suit in 2016 are in the biotechnology/life sciences sector. Over the past 10 years, companies in this sector have averaged about 15 percent of all suits filed in any year. However, in 2016 they made up 24 percent of the population—a striking increase.

A surprise in the cohort of 2016 was the number of companies sued that have a market capitalization of over $10 billion.

You can get more insights into the 2016 class action landscape by clicking here to get instant access to the “D&O Databox Flash Report” for 2016: