The latest findings from the D&O Databox, a Woodruff Sawyer publication, on securities class action lawsuits are in for Q3 2014. One headline of note: the number of class action cases rose steadily in Q3 2014, just as they did in Q2. 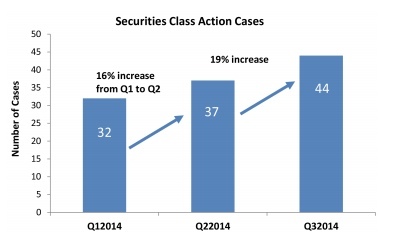 While data from previous years suggest there may be a fourth quarter drop off, it may not be much of one. We expect a total of 140 to 150 cases to be filed this year, an increase ranging from 4 percent to 11 percent compared to 2013.

What Companies Are Being Sued?

Technology, life sciences, financial and services sectors lead the way out of the 10 verticals in which suits were filed through Q3 2014. 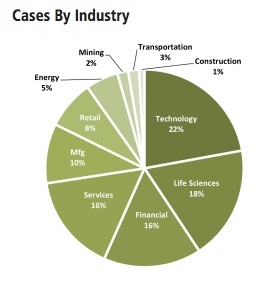 Digging a little deeper, the data show that 49 of the 113 lawsuits (43 percent) filed through Q3 2014 focused on accounting problems that included:

Also, fertile ground for lawsuits stem from allegations related to product and services issues. Filings of this nature occurred against 36 percent of the companies sued in Q3 2014.

Some of these suits focused on:

Accounting and product/service issues are not new. But another 2014 development appears to be the same company being sued twice in the past two years, sometimes for similar reasons.

The following five corporations have had to defend against securities class action lawsuits in both 2013 and 2014:

It is unusual to see securities class action lawsuits against the same company in such a short time; however, five such suits is not necessarily a trend. Still, we’re watching the situation.

At the very least, a company that has already been sued needs to see where other lawsuits might be brewing, especially if other areas of the corporation are susceptible to the issues uncovered in the first lawsuit.

Cash settlements in the third quarter added up to $1.1 billion. However, the majority of that amount came from settling the 2008 AIG subprime credit issue suit, a $960 million settlement.

While we might think that new developments like the recent Halliburton case could eventually change this situation, that day is by no means here yet.