Sixty-nine securities class action cases were filed against U.S. public companies in the first half of 2014. That’s a 19 percent year-over-year increase. This is according to the “Mid-Year Securities Class Action Report”. from the D&O Databox (a Woodruff Sawyer publication).

But those data don’t necessarily indicate securities class actions are on the rise as a whole.

The tech industry saw the most cases filed in the first half of 2014 at 22 percent, followed by life sciences at 19 percent. Not surprising, as these two sectors showed the most activity in Q1, too. 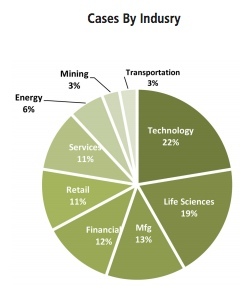 When it came to payouts, 83 percent of cash settlements settled in the $0 to $20 million range. The largest cash settlement in 2014 thus far was Massey Energy Company for $265 million for mine safety issues where lives were lost. 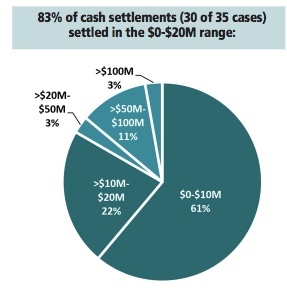 In Q2, Hewlett-Packard joined the list of top cash settlements in 2014 at $57 million in addition to Autoliv at 22.5 million.

Key Rulings in 2014 for Class Actions

This year, we’ve also seen the ruling for what would have been a landmark case to put the kibosh on frivolous class action suits.

In Halliburton v. Erica P. John Fund, the U.S. Supreme Court decided not to overturn the 1988 ruling, Basic, Inc. v. Levinson, which would have made it harder to certify a class moving forward.

But there was a silver lining in the Halliburton ruling for public companies facing class actions; the Court said it would be acceptable for defendants to present evidence at the class certification stage to potentially make weaker cases go away much earlier.

And another ruling in the first half of 2014 could amplify the message that class action suits without merit are losing steam. The Delaware Supreme Court said Delaware law supports fee-shifting bylaws where the losers pay not only their own legal fees, but also those of the defendants.

Forward looking to the second half of 2014, and we continue to regard very seriously the U.S. Securities and Exchange Commission’s stated agenda.

In January of this year, SEC’s Chair Mary Jo White said 2014 would be “an incredibly active year in enforcement, as we continue to vigorously pursue wrongdoers and bring enforcement actions across the entire industry spectrum.”

For more data from the report, including resources that dive into trending topics of 2014 for public companies and directors and officers, access the “Mid-Year Securities Class Action Report” here.