For the first time in a long time, securities class action filing rates are down, but insurance carriers continue to suffer losses from recent large settlements. Because of this, the D&O insurance market continues to be challenging with rates and self-insured retentions increasing.

Woodruff Sawyer’s 2020 mid-year analysis of securities class action lawsuits from our proprietary DataBox has just been released. Let’s take a closer look at the highlights.

GET INSTANT ACCESS TO THE DATABOX 2020 MID-YEAR REPORT NOW >>

The first half of 2020 saw a 26% drop in securities class actions filings compared to 2019 for the same period.

Frivolous Section 11 claims were the driving force behind the 10-year high in 2019. This was a result of the Cyan Supreme Court decision in March 2018 that said Section 11 suits could be brought in all 50 state courts (versus just federal courts). Some companies experienced parallel filings in both state and federal courts.

A landmark decision in Sciabacucchi in 2020, however, may curtail some of the frivolous Section 11 cases brought in state courts. In Sciabacucchi, the Delaware Supreme Court said companies could adopt provisions mandating that Section 11 suits against them be heard only in federal courts.

Unfortunately, we have not yet seen this ruling have a significant impact on the rate of Section 11 case filings. Fifty percent of Section 11 claims were filed in state courts in the first half of 2020 versus 51% in all of 2019. Note, however, that there has been a 66% drop in Section 11 cases overall to date versus the same period in 2019. 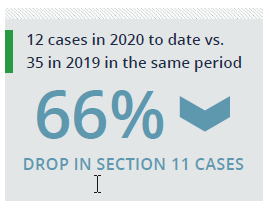 Sciabacucchi might be partly responsible for this drop, but a more likely scenario is the impact of COVID-19 slowing down the plaintiff’s bar just like the pandemic has slowed down the activity in many other industries. 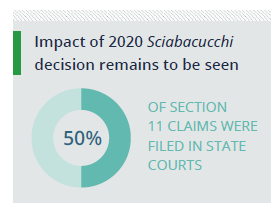 While filings are down, settlements are up. In the first half of 2020, 36 securities class action settlements represented $1.4 billion in payouts. 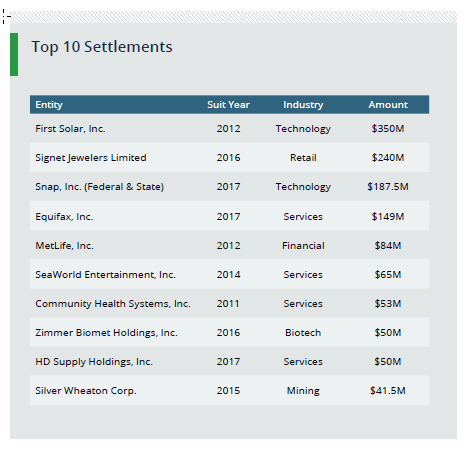 One notable settlement involving Signet Jewelers topped $240 million of which $205 million was funded by D&O insurance. This was a #MeToo case.

If large settlements continue to come in at a steady pace, it’s likely that 2020 could outpace 2019 in total settlement dollars.

As a result of increased filing activity over the past couple of years paired with settlements paid by insurers, premiums and self-insured retentions have increased dramatically.

So will the reduction in filings lead to an immediate decrease in rates and self-insured retentions? No. Carriers are concerned about cases in the pipeline that have already resulted in significant defense costs and that they believe will also result in large settlements. As of mid-year 2020, there is a backlog of about 600 cases that have yet to reach a conclusion.

Thus, it’s not likely that companies will see relief with their D&O insurance rates any time soon. This hard market is causing people to look for creative solutions–even having wealthy individuals indemnify directors instead of D&O insurance. (Which can be tricky.)

For more data on the state of securities class actions in 2020 and what we can expect for the rest of the year, download your copy of the DataBox 2020 Mid-Year Report..