On April 22, 2019, Arizona Governor, Doug Ducey, signed a distracted driving law, which bans using handheld devices while driving. The state now joins 17 other states in banning handheld phone use behind the wheel. 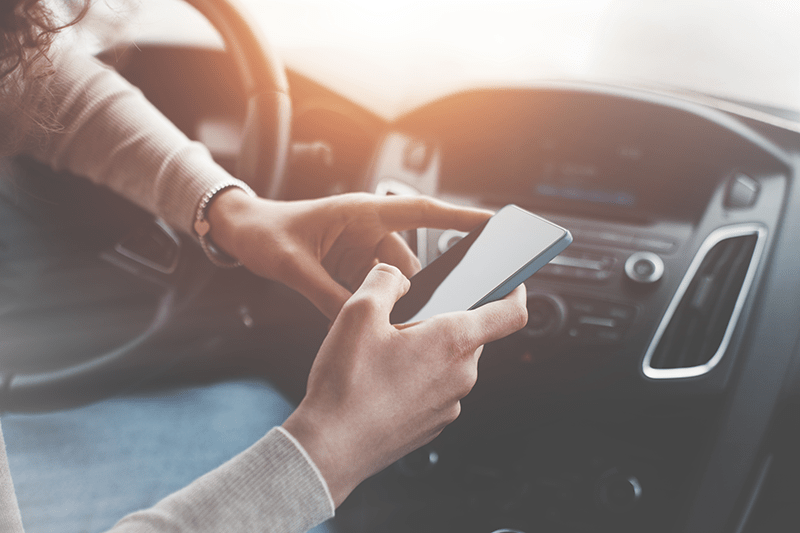 The new law is intended to make the roadways safer, though the impacts go beyond changing driver habits. Here we’ll discuss the new law, demonstrate how it can alter insurance premiums, and offer some tips on how to prepare and stay safe on any road in the US.

The Dangers of Distracted Driving

According to the National Highway Traffic Safety Administration, distracted driving led to more than 3,000 traffic deaths in 2017. Nearly 10% of fatal crashes involved driver distraction and victims have been drivers, passengers, cyclists, pedestrians, and others.

This issue is not new, and as we’ve discussed before, distractions can be visual, manual, or cognitive. Consider this: taking your eyes off the road for five seconds (to read a text, perhaps) can be long enough to cover the length of a football field.

What Does the New Hands-Free Driving Law Say?

The Arizona legislature created the hands-free cell phone law to minimize behavior that heightens the risk of deadly crashes. News reporting on the new law offers more detail on the ban, which prohibits using and holding any electronic device while driving. Watching video while driving is also prohibited.

This law was passed due to the number of deaths and injuries caused by distracted driving, which has been described as a public health crises.  The sharp rise in accidents caused by distracted drivers is occurring all over the United States and legislation has been enacted to deter drivers from texting while driving, which will hopefully lead to fewer injuries and lives lost.

Certain hands-free devices (in-vehicle navigation systems, for example) are acceptable to use, however. Drivers in Arizona may use their phones behind the wheel in a few specific situations, including:

While the Arizona ban goes into effect officers may now stop drivers and issue warnings, fines won’t be handed out until 2021. Fines will range from $75 to $149 for a first violation, with successive violations costing $150 to $250 each.

Arizona is the 48th state to make texting behind the wheel illegal; only Montana and Missouri are left. Just 17 states other than Arizona have banned all handheld electronic use while driving.

Because the laws vary from state to state, it’s best to simply assume handheld devices are not allowed behind the wheel. Oregon, for example, allows hands-free driver phone use while stopped at a red light, whereas Arizona drivers may use a handheld phone at a red light.

How Does the Ban Impact Auto Insurance?

Beyond fines, breaking the law in this instance can impact your auto insurance rates and cost you more than you may think.

Auto insurance costs are already increasing nationally because of distracted driving trends, so we’re all paying more, whether we drive distracted or not. The hope for consumers is that these driving laws will curb dangerous driving trends and ultimately, the resulting insurance hikes.

Be aware of another risk you take when using handheld electronics behind the wheel: being sued.

It’s easy to determine if a driver was using a phone at the time of an accident, and that evidence can impact not only whether or not you’re sued, but for how much. If you cause an accident, a personal injury attorney’s due diligence could include a subpoena of the phone records.

While safety is a top priority, it’s important to understand how even one text could affect your finances and legal record for years to come.

Drive Safely in Every State

The new law in Arizona only highlights what we all already know: Using electronics while driving is not safe and could have deadly and expensive consequences. In order to observe the law in every state, assume drivers are not allowed to use handheld electronics behind the wheel.

Invest in a Bluetooth or other hands-free feature to ensure you’re observing the law no matter what. And use these best practices when driving with your cell phone or other device in the car:

Everyone wants to be safe on the road, and we all have the ability to reduce crash risks by not using phones behind the wheel. Make a habit of resisting your electronics while driving, and make the roadways safer wherever you go.