We only just passed the midpoint, but 2015 is shaping up to be a record year for securities class actions if things keep going at the pace they have been. If they do, this year will experience the highest number of class action suits filed since 2005.

Woodruff Sawyer just released the “DataBox Mid-Year Securities Class Action Report,” which tracks securities class action litigation filed against public company issuers and their directors and officers for the first half of 2015. The mid-year report focuses on suits filed in federal courts against public companies by holders of common or preferred stock.

So far, the first half of 2015 has seen a 20 percent increase in filings (83 total) compared to the same time frame in 2014. This is approximately 14 new cases per month. At this pace, we forecast a total of approximately 166 securities class action law suits by the end of the year. The only other year that would come close to this would be 2005 with 162 suits.

The upswing is likely due to the volume of IPOs entering the market in the past few years. To put the growth in context, there were about 300 IPOs in 2014, the most active year for IPOs since 2000 when we saw just over 400, according to this report by Renaissance Capital; compare this to the low of 100 IPOs in 2008. (For more on recent IPO activity, go here.)

The percentage of companies sued in their first three years of going public is rising, as illustrated in the graph below: 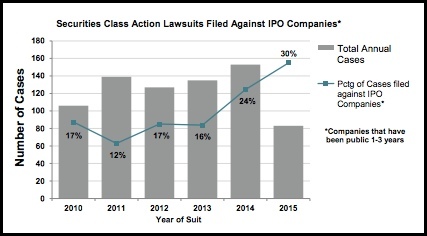 It’s no surprise that the technology sector is the one that experienced the highest number of suits filed (at 48 percent) in the first half of 2015, continuing a trend we’ve seen for some time. Forty-seven percent of technology companies sued so far this year have been public for fewer than three years.

By the way, 11 tech companies went public in Q1 2015, and there are hundreds in the pipeline, according to CB Insights.

Taking a closer look, it’s not just IPOs that are contributing to the rise in suits filed in the first half of 2015. Chinese companies listed for trading in the U.S. continue to be the target of class actions due to bad accounting, fraudulent financials or poor disclosure.

In the first half of 2015, we saw some notable settlements: $400 million for Pfizer, and many others in the multimillion range. Almost half of these settlements involved a merger or acquisition that led to big losses and large class action settlements for companies with a market cap of over $15 billion. 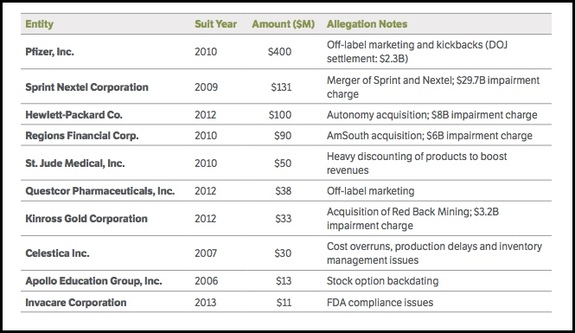 (For more on minimizing risk during M&A, check out my previous posts here and here.)

For a more detailed look at class action suits for the first half of 2015, not to mention important information on things like the emerging trend of plaintiffs’ filing Section 11 cases in state court, as well as the latest on “claw backs,” download your copy of the “Databox Mid-Year Securities Class Action Report.”