Some companies use the summer months to review governance issues. If that’s your company, reviewing your whistleblower policy is a great thing to do right about now.

The Office of the Whistleblower within the Securities and Exchange Commission is active. Depending on the situation, this activity can be an area of concern for boards. Let’s look at where we’re at now, and a brief history on how we got here.

Yes, the Incentives Are Huge

The most common allegations in 2015 were not surprising. Common complaints included corporate disclosures and financials (17.5 percent), offering fraud (15.6 percent) and manipulation (12.3 percent). The following chart from the 2015 Dodd-Frank Whistleblower Program annual report show this in more detail: 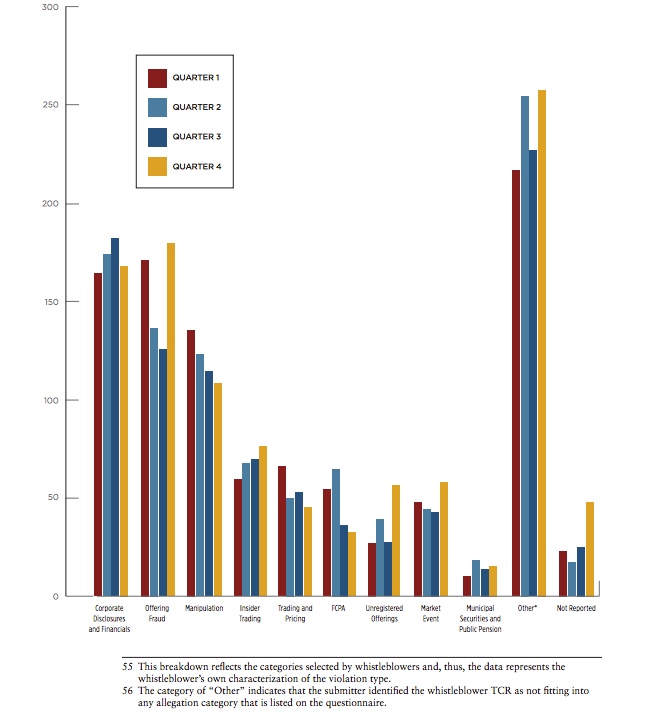 California’s share of whistleblowing topped several states, putting it alongside Florida, New Jersey, Texas and Florida as the states with the highest frequency of tips in FY 2015: 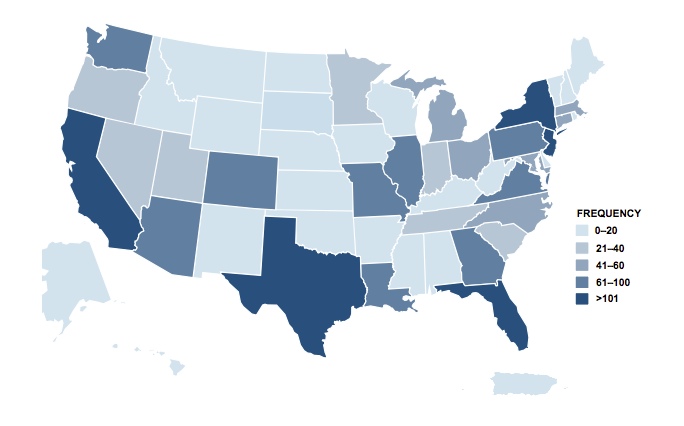 There’s no doubt that the SEC’s whistleblower program provides a way to weed out bad actors in the market. And there are no signs of this program slowing down. To understand how it got to where it is today, it helps to see how the SEC’s view of whistleblowers has developed over the past few years.

Issued pursuant to Dodd-Frank, the SEC’s whistleblower rules went into effect in August 2011 to help aid the SEC’s mission of protecting investors and maintaining fair, orderly and efficient markets.

As a part of the program, whistleblowers were now eligible to receive monetary awards of up to 30 percent of the recoveries collected when a public company was charged.

Over a brief period of time in the past few years, we saw several clarifications on the whistleblower rules, who could be a whistleblower, and who is afforded the protections of one.

Approximately one year later in April 2015, the SEC imposed a cease and desist and $130,000 in fines for one company that had restrictive language in its internal confidentiality agreement that might have prevented employees from conveying information to the SEC.

In May 2015, the SEC announced that it would award a corporate compliance officer more than $1 million for their whistleblowing efforts. As a reminder, compliance professionals are typically exempt from being eligible for whistleblower rewards,  with some exceptions.

The exception in this case was that the whistleblower “had a reasonable basis to believe that disclosure to the SEC was necessary to prevent imminent misconduct from causing substantial financial harm to the company or investors.”

A few months later in August 2015, the SEC issued an interpretation of the whistleblower rules in response to growing disagreement in courts on who was afforded whistleblower protection when it came to employer anti-retaliation.

The SEC described the “ambiguous” nature of Section 21F of the Securities and Exchange Act of 1934 and acknowledged that it could cause confusion. From the interpretation:

The end result was the SEC clarifying in Rule 21F-2 to include two separate definitions of whistleblowers with employer anti-retaliation rights, and one of them “does not depend on adherence to the reporting procedures specified in Rule 21F-9(a).”

In other words, those who simply report wrongdoings internally, but not to the SEC are still eligible for employer anti-retaliation protection.

All things considered, we are likely to see in 2016 even more whistleblowers than last year.

Much of the power to address these complaints first lies in the hands of the company where the complaint originated, before the situation ever reaches the SEC.

The SEC itself stated in the 2015 report that the whistleblower program “was designed to complement, rather than replace, existing corporate compliance programs.”

The SEC recognizes this even though it provides incentives for those with information about unlawful conduct to come forward; it also encourages them to work within their company’s own compliance structure when appropriate.

Now is a good time for many to review their whistleblower policies. Start by asking outside counsel to review them. Confirm that the policy is readily available to all employees, not to mention the employees of companies your company employs. One way to do this is to make the policy available on your public-facing website.

Also, do a test run on the email system and telephone hotline that your policy provides for complaint intake. Consider whether live training on the policy makes sense for your company, perhaps in conjunction with some other training your company is already doing, or on a standalone basis.

Having a solid whistleblower program—one that takes every complaint seriously—can give your employees the confidence they need to attempt to resolve their concerns without running straight to the SEC.

Many of the complaints will turn out to be misunderstandings that the complaining employee will be happy to have explained to him or her. Other situations will allow your company to nip potential bad behavior in the bud.

Taking these steps now can help prevent your company from being the subject of one of the thousands of complaints the SEC receives each year.