It was the week of Independence Day 2019 and Nike was set to launch its holiday-themed shoe, the Air Max 1 Quick Strike Fourth of July. But Nike ambassador and former NFL player Colin Kaepernick had something to say about it — and Nike pulled the shoe from production.

Kaepernick asserted that the “Betsy Ross” flag that would be featured on the shoe (the one that represented the 13 original colonies) was offensive due to its historical ties with an era of slavery.

Nike agreed not to sell the shoe. A Nike spokesperson later said that the company pulled the shoe “based on concerns that it could unintentionally offend and detract from the nation’s patriotic holiday.”

A slew of supporters and detractors were quick to express themselves. One of those detractors was Arizona Governor Doug Ducey who took to Twitter to weigh in:

Today was supposed to be a good day in Arizona, with the announcement of a major @Nike investment in Goodyear, AZ. THREAD—>
1/

This is not the first time Nike, a company that is presumably in the business of making money for its shareholders, has waded into the national political scene by taking a controversial stand.

In 2018, the company featured Kaepernick as the face of a controversial ad campaign. 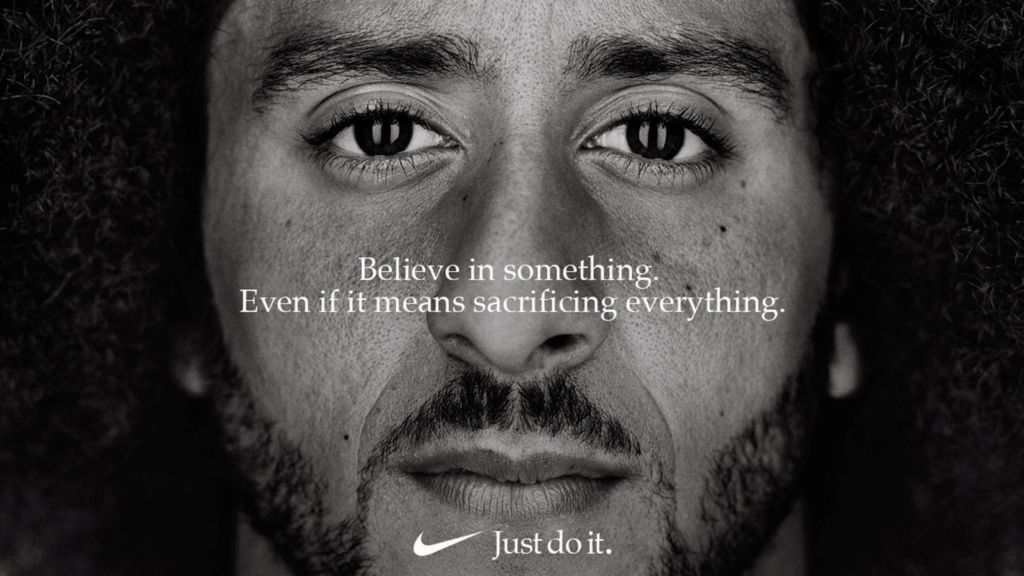 At that time, Kaepernick was still very much in the headlines due to his provocative practice of kneeling during the US national anthem at NFL games, beginning in 2016.

Despite the controversy, including significant negative press and even commentary from the US President Donald Trump, Nike’s tie to Kaepernick is speculated to have made the company $6 billion, as reported last year .

With regard to the latest controversy regarding the “Betsy Ross shoe,” the market has spoken : Nike’s stock closed at $86.82 up from $84.53 with the boost coming one day after Nike pulled the shoe.

Notably, Governor Ducey also had a change of heart about Nike, tweeting support for the Nike factory that would continue its plans to make a home in Arizona despite his original comments.

This is good news for Arizona and for @GoodyearAZGov. 500 plus jobs. Over $184 million in capital investment. Arizona is open for business, and we welcome @Nike to our state. https://t.co/ZLPkcs3dkD

Nike isn’t the only example of a consumer-facing company that’s taken a side in a divided nation.

Take, for example, Starbucks, which in 2013 asked patrons not to carry firearms inside their stores or the outdoor seating areas, even in states with concealed gun carry laws. Starbucks found itself in the media again when it unveiled its non-religious holiday cup during the 2015 holiday season, a decided change from the Christmas symbols it had featured in years past.

Another example of a consumer-facing brand wading into a difficult political issues was the reaction of Dick’s Sporting Goods in the wake of the shooting at Marjory Stoneman Douglas High School in Parkland, Florida in 2018. The retailer very publicly discontinued selling assault-style weapons in its store, and to stop selling firearms to consumers under the age of 21. The decision, and resulting backlash from some consumers, has contributed to the sporting goods store’s current financial challenges.

Sometimes, though, company executives aren’t the ones making a decision to be involved in politics—the employees are.

Take the 2018 global employee walkout at Google that propelled the tech giant into the spotlight for issues related to sexual harassment and discrimination; or the 2019 employee walkout at online retailer Wayfair for the company’s sale of about $200,000 in mattresses and bunk beds destined for a Texas detention camp for migrant children.

Other factors that may propel consumer-facing corporations into the divisive world of politics, whether or not they want to, is a company’s employee and consumer base.

By 2030, Millennials will make up 75% of the workforce. Also, Millennials are an important consumer group—they are predicted to spend $1.4 trillion annually on consumer goods by 2020, or about one-third of total US retail expenditure.

Why the focus on Millennials? According to research published in 2017 , nearly half of the Millennials surveyed believed that CEOs have a responsibility to speak up about issues that are important to society.

How Boards Can Walk the Fine Line

All boards—especially boards of consumer-facing companies—will want to be proactive about what are they going to do if their brand or products become politicized, whether through a marketing campaign or CEO activism.

One question a board might ask is: Whose job is it to make these political decisions?

There’s a good argument that this is a management decision. Yet, if management goes in a direction that causes a company to lose value, clearly shareholders will be disappointed by the board’s lack of oversight.

At a minimum, now is the time to have a boardroom discussion about the issues. You will want to be sure that you have a shared understanding between management and the board as to who is making these decisions and what that decision-making process looks like.

Particularly when a CEO has a personal passion project, it might fall to the board to bring up important issues like the ones suggested in this Harvard Business Review article.

Is the issue relevant to the company, and will the CEO’s voice on the matter be regarded as appropriate?

In light of Nike’s success, some might advocate entering into a political debate as a brand strategy. Caution is warranted here.

First of all, co-opting a political perspective in a ham-fisted way, in addition to being inauthentic if not offensive, can lead to a massive backlash. For a powerful example of this just look to the debacle involving Pepsi’s ads that led to accusations that Pepsi was trivializing the Black Lives Matter movement.

For those looking at a purely dollars and cents perspective, the jury is still out as to whether CEO political activism is net positive when it comes to corporate performance or not.

The impact of CEO activism on corporate performance is essentially unknown. Chatterji and Toffel (2018) find that CEO activism can “increase consumers’ intentions to purchase the company’s products” but only to the degree that there is “alignment between the CEO’s message and individuals’ policy preferences.” Korschun, Aggarwal, Rafieian, and Swain (2016) find that CEO activism is viewed positively by consumers if the company is considered “values-oriented” but negatively otherwise. The authors argue that the impact of CEO activism on purchase behavior is driven by the degree of “perceived corporate hypocrisy.”

Another action for boards to take is to consider how the personal involvement by other company executives in politically charged issues might impact the corporation.

For example, it’s easy for reporters to find and publish lists of executives who have spoken out publicly or just given money to various political causes.

While many boards will not necessarily curtail executives’ ability to express their beliefs and to support causes they deem worthy, no board wants to be surprised by this. In any case, it’s a good idea to have the discussion.

There will be some boards that may choose to memorialize their decisions in the form of some sort of written policy. It would be prudent for these boards to work with outside counsel and other advisors when crafting their policies.

Indeed, there are PR firms that have developed specialization on the topic of CEO activism.

Some boards, on the other hand, might decide to take a much more heavy-handed approach, understanding that senior executives, especially CEOs can’t really ever divorce their personal lives from their public lives. These boards may take this position because when executives embroil themselves in controversial issues, the distraction to themselves and the company dealing with the fall out can be significant.

Though companies have been taking a political stand throughout the course of history, with today’s politically charged environment, we’re seeing more and more of it.

Of course, there will be some folks in the boardroom who would like for the company to stay neutral and not take a political position at all. Unfortunately, that’s probably not possible. Particularly, if you’re on the board of a consumer-facing company, these issues will arise sooner than later.

Also, given that both consumers and employees today are very active in politics, not being consumer-facing won’t insulate you from having to deal with these issues, either.

The worst risks are those you don’t see coming, and therefore have not addressed. When it comes to politics and companies, the risk is here. Boards serve their shareholders well by taking deliberate steps to determine how they will handle this issue.