Director pay is once again in the spotlight. This time, the circumstances that gave rise to the suit exist at many public companies. As a result, a suit similar to the one brought by stockholders against Citrix Systems, Inc. in Calma vs. Templeton, and decided in April 2015 by the Delaware Court of Chancery, could easily be brought against many other public company directors. 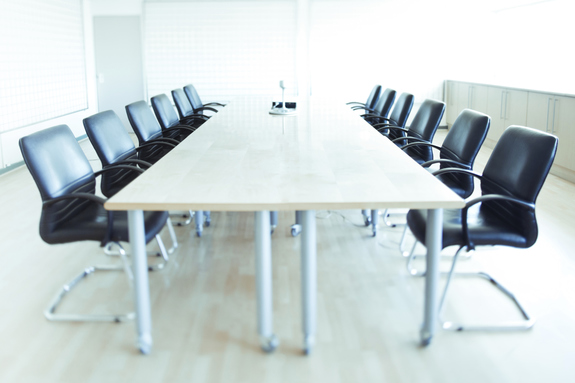 The plaintiffs in Calma brought a derivative suit alleging that the directors of Citrix had awarded themselves an excessive amount of compensation in the form of restricted stock units (RSU), thus resulting in claims against the directors on behalf of Citrix for breach of fiduciary duty, waste of corporate assets and unjust enrichment.

Citrix directors brought a motion to dismiss the claim. The directors’ defense was that, like other public companies, Citrix had received stockholder approval for its director compensation plan when it was put to a vote back in 2005.

The director compensation plan that the shareholders approved allowed, by its terms, awards to directors (including non-employee directors) of up to one million shares. No one disputes that the directors needed to be paid, and that RSUs were appropriate. At issue is the amount of compensation.

At the time the claim was filed in 2014, one million shares was the equivalent to about $55 million. Needless to say, however, no director actually received that amount. Rather, the compensation committee set the amounts of the actual awards.

The claim specifically challenged the RSU awards given between 2011 and 2013.  The court’s opinion highlighted the awards in question in the following table: 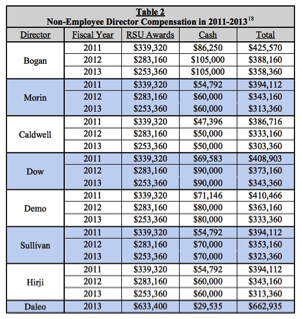 The plaintiff further complained that, compared to its true peers Citrix’s compensation was excessive. The plaintiffs were especially unimpressed with the fact that Citrix had included in its proxy peer group companies with higher market capitalizations such as Amazon, Google and Microsoft.

But what about the fact that shareholders approved the plan?

The court found that although the plan was approved previously and did have some limits (the one million shares threshold), the details of the plan were not specific enough to warrant a deferential standard of review in the face of the stockholder complaint.

From the court’s opinion:

Because Plaintiff does not allege otherwise, I treat the Citrix stockholder approval of the Plan in 2005 (and of the amendments thereto) as a vote of approval by a majority of informed, uncoerced, and disinterested stockholders. The Plan specified the total shares available (Section 4), the beneficiaries under the Plan (Section 6.1(a)), and the total number of shares that any beneficiary could receive in a calendar year (Section 6.1(b)). But the Plan did not specify the amount or form of compensation to be issued to the Company’s non-employee directors.

In the opinion, the court asserted that “Citrix stockholders were never asked to approve—and thus did not approve—any action bearing specifically on the magnitude of compensation for the Company’s non-employee directors.”

So even though shareholders generally approved the plan, the lack of specificity with respect to non-employee directors was a problem for the court.

The end result was that the directors did not benefit from the business judgment rule, a deferential standard of review that courts generally prefer to apply when stockholders challenge the acts of directors.

Thus, in addition to denying the directors’ motion to dismiss, the court indicated that it would apply the entire fairness standard of review to consider the plaintiff’s claims of breach of fiduciary duty and unjust enrichment.

The court seems to have indicated that this review will include the court’s getting into the details of the peer group Citrix used when determining director compensation.

What This Means to Corporate Compensation Plans

This is not the first time, nor will it be the last time a company’s stockholders may seek to scrutinize director compensation. In Calma, the plaintiff cited the decision in a similar case of Seinfeld vs. Slager in 2012.

As you may have noticed, the circumstances surrounding the Calma case are not that unusual. We see other high-profile cases on director pay pop up, for example the pending suit against the Facebook board for its compensation.

On June 9, 2015, a suit was brought against the directors of Goldman Sachs for alleged excessive director pay. Clearly, the decision in Calma has the potential to be a real fire-starter for this type of litigation.

Now is the time to discuss the implications of Calma with your trusted advisors. If your company has a director compensation plan for which shareholders have not previously approved specific amounts of equity compensation for directors, now may also be the time to take a hard look at changing this practice.

In Calma, the court opinion stated that “specifying the precise amount and form of director compensation in an equity compensation plan when it is submitted for stockholder approval ensure[s] integrity.” And keep in mind, as Gregory Schnick points out in his National Law Review article on Calma, in such circumstances “only the doctrine of corporate waste would be available to support a plaintiff’s challenge to the directors’ compensation.” As I discussed above, this is a very difficult claim for plaintiffs to pursue successfully.

The discussion of how to compensate directors and officers is an ongoing and difficult one. Add into the mix the rise in shareholder activism, and you can see how boards are facing a level of scrutiny today that requires a new level of diligence when it comes to almost any issue.