D&O Insurance premiums for foreign filers are rising. In this guest-authored edition of the D&O Notebook, Woodruff Sawyer’s Jane Njavro discusses the trend and its causes.

It’s a tumultuous time in the D&O insurance market, and foreign filers (companies based outside of the US but listed on a US exchange) are facing unusually steep increases in D&O insurance premiums. Historically, these companies have benefited from discounted D&O premiums relative to their US counterparts, but that is quickly and dramatically changing—largely due to increased litigation and settlements against foreign filers.

Until recently, even if a given foreign company had the same exposure as their US counterparts, foreign D&O insurance underwriters had their own model for pricing, resulting in lower premiums for similar US SEC exposure. Foreign filers are now facing premium rates that have reached parity with their US peers, in some cases doubling or tripling the total spend from one year to the next.

After many years of record litigation rates, the underwriters have reached a tipping point. The number of claims against foreign filers and the average settlement amount have both been increasing in nearly every region of the world over the past 10 years. The market has seen so many losses that the previous pricing was not sustainable, driving these markets to adjust their pricing models.

To begin analyzing these changes, we turn to the data surrounding securities class action suits filed against US-traded foreign companies over the past 10 years, broken down into two five-year segments. Woodruff Sawyer is able to tap into our own proprietary database of over 30 years of data, which we call DataBox, for this analysis.

The difference between the first five years (2009 to 2013) and the second five years (2014–2018) is a 41% increase in filings, with nearly every region experiencing a major jump in the number of suits.

While the Asia and Pacific region still leads the pack with the highest number of suits as a result of filings against Chinese companies, the regions that have experienced the biggest changes are Europe, and Africa/Middle East (due to filings against Israeli companies)—and it’s now playing out in the cost of coverage. 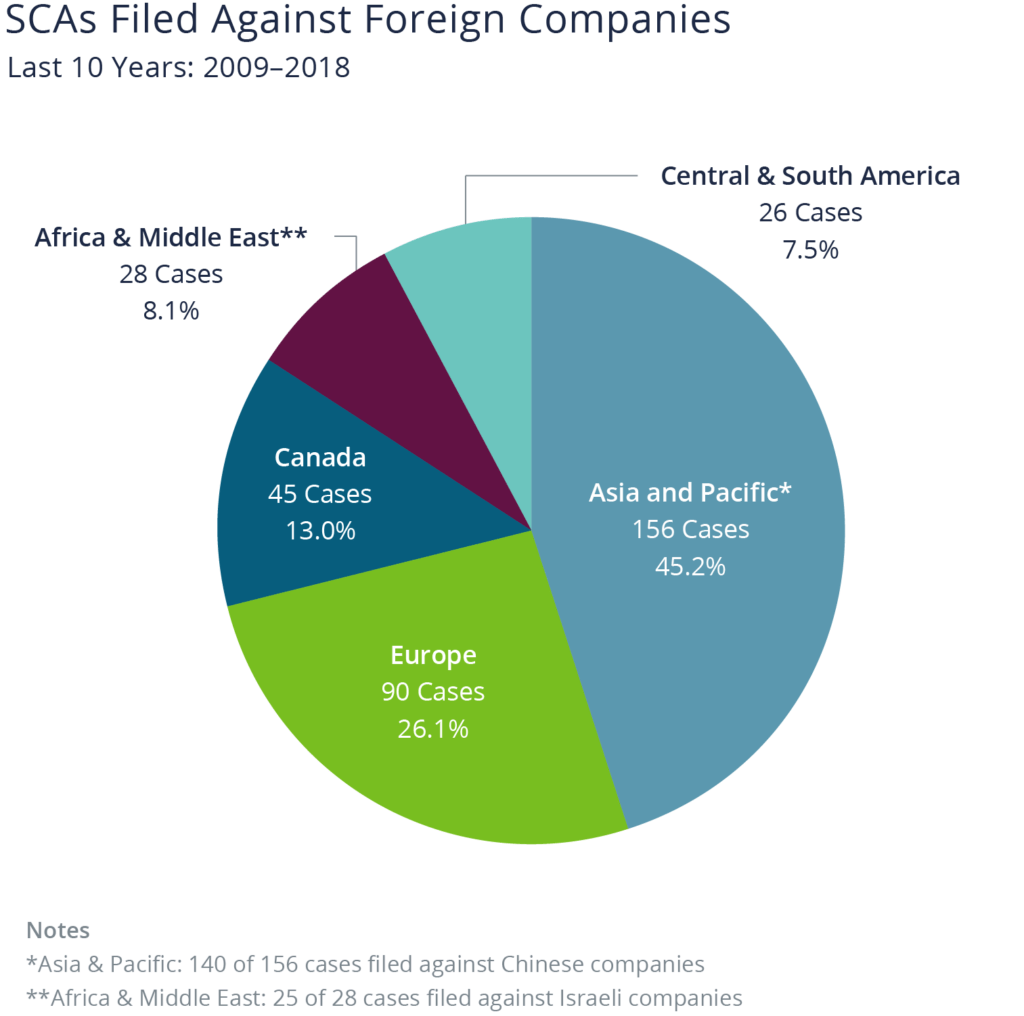 Just as the number of settlements is growing, so are the amounts paid out in settlements, to the tune of a 581% increase when comparing the first five years to the next five years of the past decade. This kind of change, from $657 million to $4.5 billion, represents a dramatic shift in the amount of losses carriers expect to absorb—an inflection point where carriers must adjust their underwriting models to account for a higher frequency and higher payout of losses. 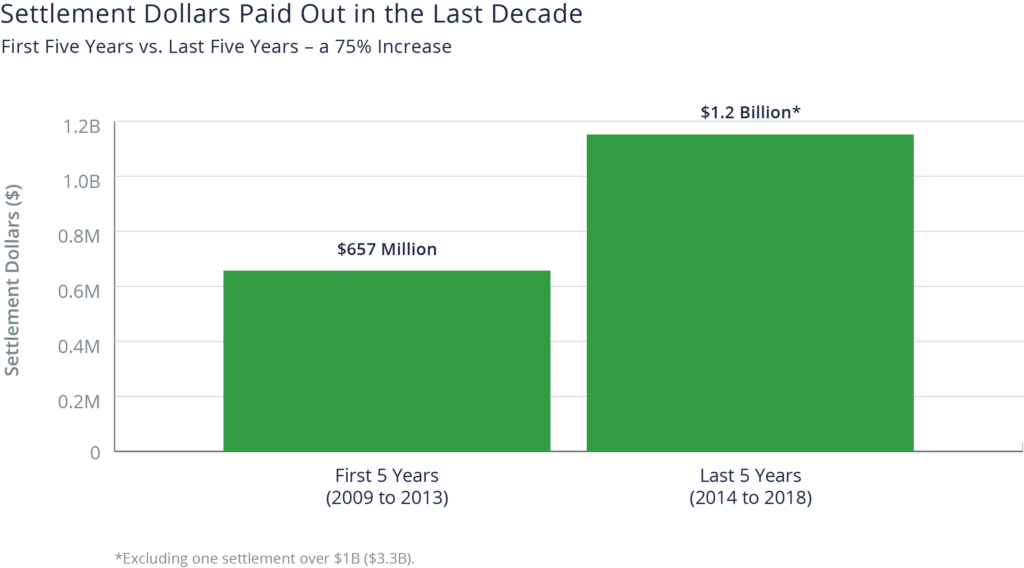 Looking at the data more closely by region shows that while the Asia/Pacific region has the most settlements, Europe has paid out the most in total dollars and has the highest average settlement amount (excluding the $3.3B settlement paid out by Petrobras).

These increases over the past decade, unsurprisingly, has caused carriers to take stock of their books.

The marketplace is dynamic. Companies with recent claims or in riskier industries such as technology or biotech are facing major premium adjustments. In addition, the market is forcing higher self-insured retentions that can vary from $2 million for a small to medium company to $5 million or $10 million for larger or higher-risk companies. Underwriters are hesitating to provide $10 million in capacity, preferring instead to provide lower limits of insurance. In addition, in recent renewals, we have seen excess capacity become harder to find and costly. In some cases, the increase of the excess layers is more significant than that of the primary carrier. Given the settlement amounts, underwriters are viewing higher attachment points as still part of a “burn layer.”

The Underwriters’ Point of View

We at Woodruff Sawyer work closely with international underwriters every day. Given the market dynamics that we are seeing, we wanted to take a systematic approach to understand their point of view on the driving factors of this market, so we distributed a survey to those working with US-traded foreign companies. Here’s what we found:

100% of respondents believe that D&O risk is going up for US-listed companies, and 87% think foreign filers are not as aware as they should be about the risk and cost of US D&O litigation.

How Much Are We Talking?

Among the underwriters we surveyed, 100% expect that D&O insurance premium rates for US-listed public companies will increase. But by how much?

As for self-insured US-listed public companies, 64% of respondents expect D&O self-insured retentions to double or triple in the coming year(s).

Where to Go from Here

What should a company do with this information?

First, be prepared to experience this increase in your D&O coverage cost. Having a broker experienced in international markets on your side will ease the process. A good broker will also guide you through the steps you can take to attempt to mitigate a difficult renewal, including:

Woodruff Sawyer’s long history of expertise in working with foreign filers is especially valuable in this type of market. We are well-positioned to help foreign filers navigate this changing environment, including by drawing on our relationships with carriers and our broad international experience.