In last week’s post, I gave some background for the  Foreign Corrupt Practices Act (FCPA). In that post, I outlined the basics of the law, and what to watch for if you do business internationally.

In this post, I’m going to shift the focus to review what’s currently trending when it comes to the government FCPA enforcement to help you better prepare your company for what is happening right now across the globe.

Gibson Dunn always does a nice job of organizing key information on FCPA, and their year-end report for 2014 was no exception. The report offers solid data about enforcement trends over the past 10 years.

The good news: enforcement actions dropped significantly in 2014 to 17 by the U.S. Department of Justice and nine by the U.S. Securities and Exchange Commission. This is a radical diminution in the number of cases since their high points in 2010 (48 and 26, respectively).

From the Gibson Dunn report: 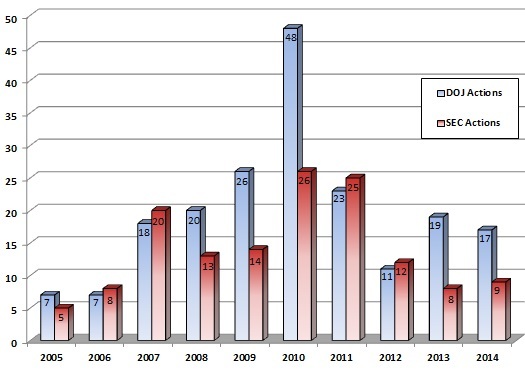 Reviewing the countries that sparked the highest number of enforcement actions in the past 10 years reveals that the top three countries were:

From the Gibson Dunn report: 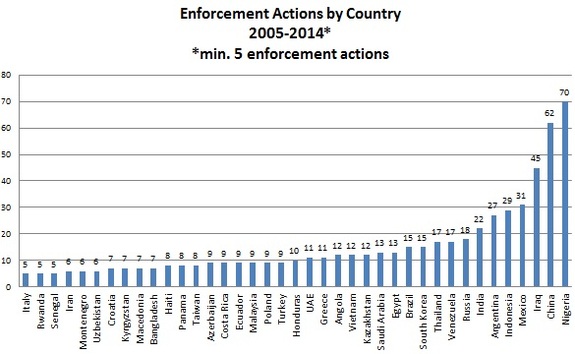 The Gibson Dunn report also gives a good summary of changes to anti-bribery laws globally. It’s important to remember that any company operating internationally has to be concerned not only with the United States’ FCPA, but also with the anti-corruption laws of other countries as well.

In 2010, the SEC created a specialized unit to enhance FCPA enforcement. At the time of writing in February 2015, the SEC has already taken action against one company.

As Gibson Dunn pointed out in its report, 2014 saw more in-house administrative actions coming from the SEC versus civil suits (eight out of nine total enforcement actions went this route). This is up from just one in 2012 and three in 2013.

As a reminder, the SEC may prefer administrative actions because they are typically much less “involved” than civil suits from the SEC’s perspective.

For example, as the Gibson Dunn report points out, these administrative cases are only months long instead of years long, as is the norm. This expedited process may not, however, be ideal for defendants.

Among other things, there is little or no discovery in these proceedings, meaning defendants are essentially limited to whatever evidence the enforcement staff collected during its investigation. Defendants who lose in front of the administrative law judge (employed by the SEC) face an uphill battle on appeal, with any appeal first heard by the SEC itself (i.e. the very Commissioners who originally voted to authorize the enforcement action), and only later by a federal court of appeals, which tends to be deferential to agency determinations.

With this new trend in litigation, the SEC has found an expedited way to work through anti-corruption enforcement actions at a faster clip than what they could accomplish in civil courts.

If your company finds itself with a potential FCPA violation on its hands, the best advice is to understand how self-reporting and cooperation can factor into reduced penalties.

For example, according to Law360.com, the SEC “credited ‘significant cooperation’ when it announced that Layne Christensen Co. would pay a total of $5 million to resolve its FCPA violations, with only $375,000 of that amount paid as a fine.”

Keep in mind also that the SEC and DOJ are increasingly focused on bringing accountability to individuals who attempt to violate the FCPA. Increasingly, individuals – not just the companies they work for – are being named in FCPA cases.

This excellent report by WilmerHale notes that the SEC brought actions against four individuals in 2014, a large jump up from bringing an action against only one individual in 2013. However, overall, the total number (DOJ and SEC) of enforcement actions against individuals decreased from 13 to six in 2014.

The bottom line, however, is that individuals remain a focus for the SEC and DOJ. Indeed, back in November 2014, the DOJ specifically warned that it would increasingly target individuals.

According to the Federal Securities Law Blog, assistant attorney general for the DOJ said it would focus on all cases that undermine the confidence in markets and governments, including due to corrupt payments:

[Leslie] Caldwell warned that DOJ efforts will focus on “bribes of consequence” — payments that fundamentally undermine confidence in markets and governments. Focusing on these types of cases allows the DOJ to show corporate executives that if they participate in a scheme to improperly influence a foreign official, they will “personally risk the very prospect of going to prison.

Back in 2008, I wrote a paper for the Stanford Law Review on the looming threat of individual actions on directors and officers under FCPA. What’s unique with FCPA enforcement is that it’s not just wrongdoers who assume liability; it’s those individuals whose inattention or lack of action could be seen as grounds for prosecution.

Even in 2008, SEC was looking at this matter in the case of SEC v. Monty Fu; an excerpt from the SEC’s ruling is cited in the paper as follows:

That said, something like failure to implement proper internal controls can be grounds for enforcement (as was the basis for Avon Products .)