The US Department of Justice and US Securities and Exchange Commission generated fewer FCPA enforcement actions in 2017 (39 versus 52 the year prior)—but don’t take your eye off the ball when it comes to global corruption.

Global law firm Gibson Dunn put together a useful analysis of current trends when it comes to FCPA enforcement in its “2017 Year-End FCPA Update.” The conclusion: the DOJ is being very aggressive in its enforcement activities.

As a reminder, the Foreign Corrupt Practices Act of 1977 (FCPA) is enforced by the DOJ and the SEC, and is applicable both to public and to private companies. There are two main aspects of FCPA:

For US corporations with operations around the globe, FCPA compliance is a big deal. Of the countries with the most violations, China takes the lead, followed by Nigeria then Mexico. 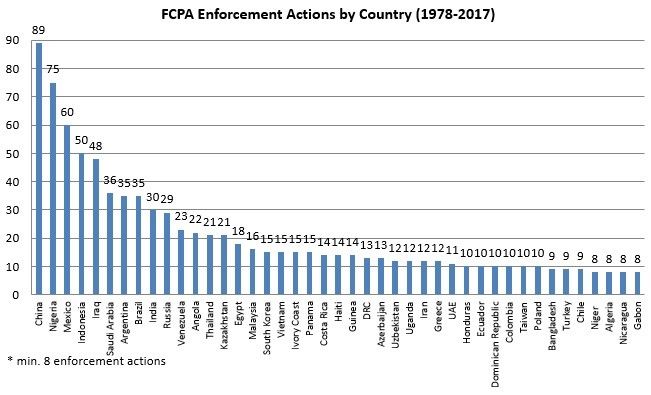 (For a refresher on FCPA, read more from an earlier post I wrote on “FCPA: What’s the Big Deal?”) 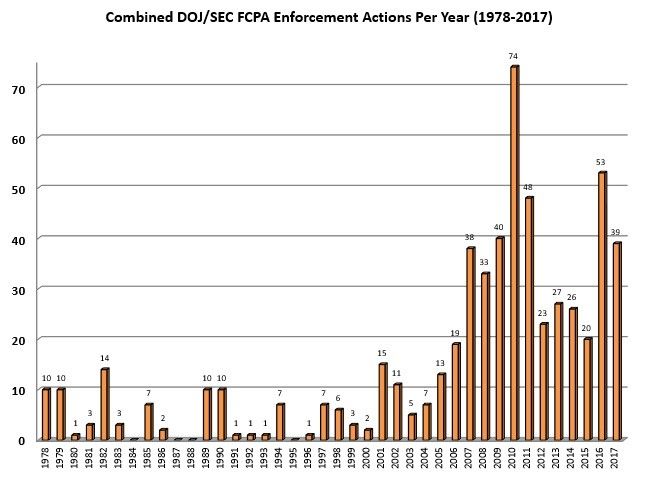 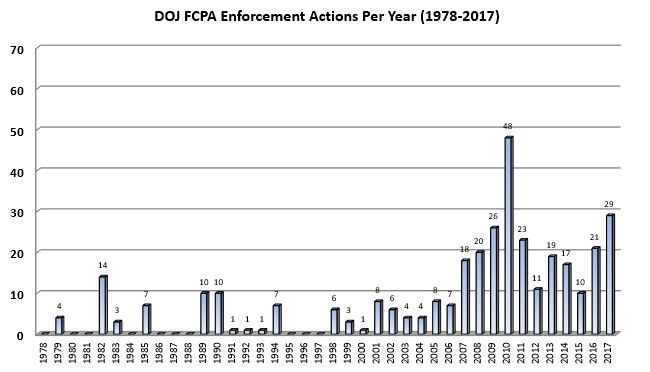 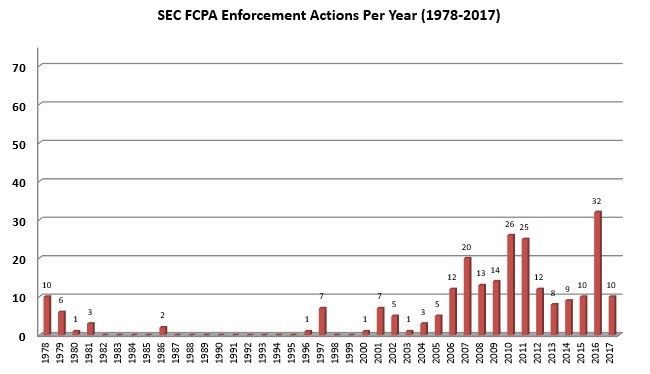 The DOJ results are no surprise; in 2017, I wrote about the DOJ’s continued focus on FCPA enforcement to “reduce corruption with effective compliance programs.” In fact, the DOJ released a very helpful document in 2017 on how it evaluates corporate compliance programs.

The total value of monetary resolutions that corporations have had to pay has been on the rise over the years, with 2016 peaking at over $2 billion. 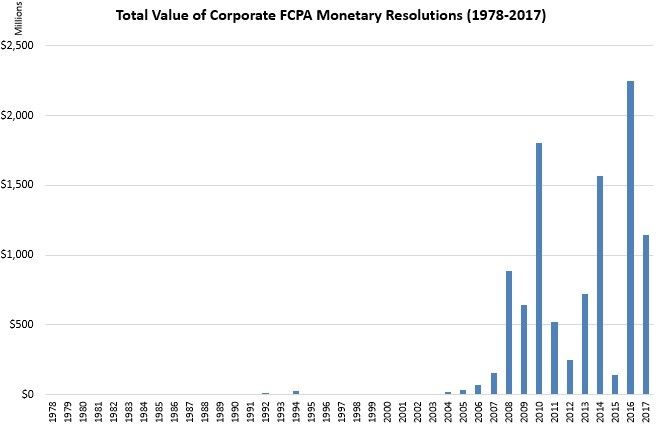 Some have suggested that these amounts have become excessive. Perhaps the DOJ is trying to remedy this.

Along those lines, in May 2018, the DOJ announced a new policy against “piling on”—which is to say that the DOJ now wants its departments and other enforcement agencies to coordinate their efforts so as to avoid multiple penalties for the same misconduct.

This article at the FCPA blog reports on why the DOJ made this move:

Piling on hurts companies by creating uncertainty. It’s harder for them to make “full and final settlements.”

“We need to consider the impact on innocent employees, customers, and investors who seek to resolve problems and move on,” Rosenstein [Deputy Attorney General Rod Rosenstein] said.

(I’ll be writing a more in-depth post on “piling on” in the near future, so stay tuned.)

Gibson-Dunn notes five trends from FCPA enforcements in 2017 as we ponder what to expect this year (head over to the report—linked to above—to read more). All five trends fall into the category of aggressive government enforcement, in some cases notably so:

In fact, the following chart shows prison sentences as a result of FCPA violations year by year: 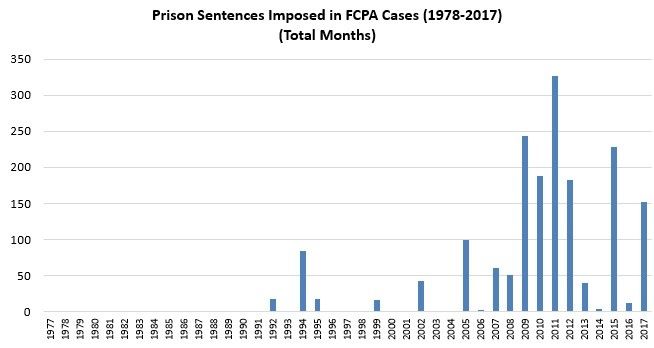 Bottom line: FCPA violations are still a big deal for directors and officers. As I’ve outlined in previous posts, prevention is the best course of action when it comes to FCPA misconduct. This means:

In addition, consider thinking ahead of time in what circumstances your company might choose to self-report an FCPA violation to the DOJ pursuant to the “FCPA Corporate Enforcement Policy” that the DOJ announced in November of 2017. With its Enforcement Policy, the DOJ has also provided a big carrot: the serious benefit of the DOJ’s deciding not to pursue an enforcement action against a company that self-reports, fully cooperates and implements timely remediation.

The DOJ’s own report on the 2017 activities of the Fraud Section of the DOJ’s Criminal Division emphasizes the DOJ’s view that self-reporting is an important sign of corporate FCPA compliance. According to the DOJ’s annual 2017 report, it declined to prosecute companies that cooperated in this manner seven times under the pilot program predecessor of the FCPA Corporate Enforcement Policy. For a nice summary of the particulars of the Enforcement Policy, you can access law firm Paul Weiss’ summary of the program in its annual FCPA review, here.