Omnicare, Inc. v. Laborers District Counsel Construction Industry Pension Fund involves the IPO of Omnicare Inc., a pharmacy service for long-term care facilities.  At issue is the disclosure contained in the initial public offering documents filed with the SEC in 2005. This disclosure did not include statements that, as plaintiffs allege, Omnicare was engaged in illegal activities such as kickbacks and the falsification of Medicare and Medicaid claims. To the contrary, the registration statement characterized Omnicare’s business dealings with pharmaceutical companies as “legally and economically valid.”

The stakes are high when it comes to getting registration statement disclosure right.  Liability for material misstatements and omissions is strict, pursuant to Section 11 of the Securities Act of 1933.  Thus, if Omnicare were engaged in illegal activities, it was obligated to disclose this. Of course the IPO registration statement did not disclose any violations of the law.

Was Omnicare engaged in illegal activities? That’s actually not the question in front of the Supreme Court.  Rather, the Supreme Court is addressing the circuit split on the following question: to survive a defendant’s motion to dismiss for failure to state a claim, is it sufficient for plaintiffs to allege that the disclosure at issue was false, or must plaintiffs also allege that the defendants knew the statements were false.

Cornell University Law School’s Legal Information Institute summarizes what the outcome of this case will tell us:

This case will likely determine what a plaintiff must prove when making a claim involving false opinions under Section 11 of the Securities Act of 1933 (“Securities Act”). Omnicare argues that under a Section 11 claim, the plaintiff must prove that the defendant’s opinion was both objectively and subjectively false. Omnicare states that this would require a plaintiff to prove that the issuer did not hold the stated belief. Contrastingly, Laborers claim that an opinion need only be objectively false in order to be a misleading material fact under Section 11.

Before going much further, it’s worth taking a moment to drill down on the idea of a statement’s being objectively or subjectively false. 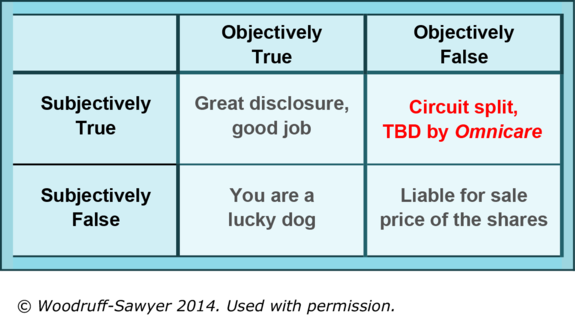 But did I believe my statement to be true when I made it? What was my state of mind?

Moving to the world of public company disclosure, consider the situation of directors signing a registration statement that contains false statements.  Let’s say the registration statement disclosed that “sales are on the rise,” but this turns out not to be true. Perhaps the directors relied on faulty data, or interpreted the data sincerely but incorrectly. This situation would still open up the issuer and the director to strict liability if the Sixth Circuit’s objectively false standard prevails.  For an especially robust discussion of whether a statement is objectively or subjectively false, and why this matters, check out Claire Loebs Davis’ (of law firm Lane Powell)’s discussion on this topic.

(As a side note, unlike the company issuing stock, directors have the affirmative—and very important—“due diligence” defense.  As a result, directors who take steps to attempt to get things right (including not ignoring red flags) will almost always be able to shield themselves from Section 11 liability.)

The Supreme Court agreed to hear Omnicare because of a circuit split. The Second, Third and Ninth Circuits say that plaintiffs will lose the defendant’s motion to dismiss for failure to state a claim unless plaintiffs allege that the disclosure in question was both objectively and subjectively false. On the other side of the split, the Sixth Circuit says that an honestly held belief is irrelevant. The only question is whether a statement was objectively false or not.

What will the Supreme Court Decide?

It’s important to remember that the actual underlying facts have yet to be proven.  In other words, the Omnicare defendants probably have a long way to go no matter what.  If the Supreme Court reverses the Sixth Circuit, it seems likely that the plaintiffs will amend their pleadings and keep the suit alive. After all, they have been pursuing this matter since 2006.

The rest of us are interested in the objective/subjective question. If the Sixth Circuit is affirmed (i.e. plaintiffs only need allege that statements are objectively false,), we should all expect to see more Section 11 claims. Suits that are hard to dismiss have significant settlement value.  There’s no doubt that the plaintiffs will do the math.

And this will be too bad.  If the Supreme Court sides with the Sixth Circuit and rules that it only matters if a statement is objectively false, directors and officers will rationally be as conservative as possible when expressing themselves.  As a result, investors who would like to understand a company’s view of itself and its prospects – including best guesses and opinions – will receive less and not more information when it comes to a company’s prospects.

In the case of Omnicare, my best guess is that the Supreme Court will act consistently with Halliburton, which is to say it will affirm the “status quo” in alignment with the Second, Third and Ninth Circuits’ opinion. I recognize, however, that this result doesn’t reflect the reported tone and tenor of the Justices at oral argument.

As for D&O insurance: if the Court affirms the Sixth Circuit’s ruling in Omnicare,  expect D&O insurance prices for IPO companies and companies that access the capital markets often to go up.  Affirming the Sixth Circuit’s position will make it more difficult for defendants to win a motion to dismiss, which will make it more expensive to settle these cases.  Logically, plaintiffs will also attempt to sue under Section 11 more frequently.