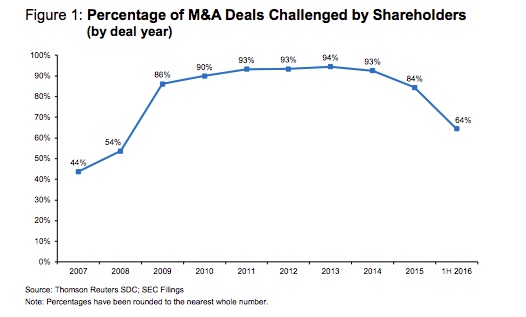 The Cornerstone report focuses on litigation surrounding M&A of public companies valued at more than $100 million. The data was sampled from 2015 and the first half of 2016.

As regular readers of this blog know, there is typically more than one lawsuit filed as a result of any given M&A deal. In 2015, the average number of suits any one deal experienced saw a slight decline, from 4.6 to 4.1. This was the lowest number seen since 2008. 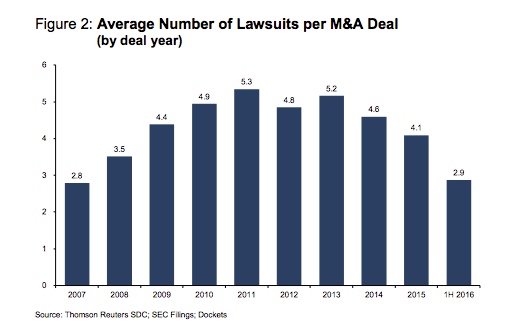 What’s driving this decline? We’re seeing the playing out of the strong position staked by the Delaware Court of Chancery in the Trulia decision in late 2015. If you remember, in that case the court stopped the plaintiffs’ bar from extorting fees out of defendants for disclosure-only settlements.

The Court decided it was not willing to approve settlements where plaintiff attorneys were awarded legal fees for nothing more than forcing defendants to provide additional, not-that-useful disclosures about an M&A deal.

Cornerstone’s research showed that in the first three quarters of 2015, plaintiffs filed suit in Delaware against public companies being acquired (where the deal size exceeded $100 million) 61 percent of the time. However, that number dropped sharply in Q4 2015 to 26 percent.

When the company being acquired was incorporated in Delaware, plaintiffs filed in the state 74 percent of the time in 2015. In the first half of 2016, this dropped to 36 percent. 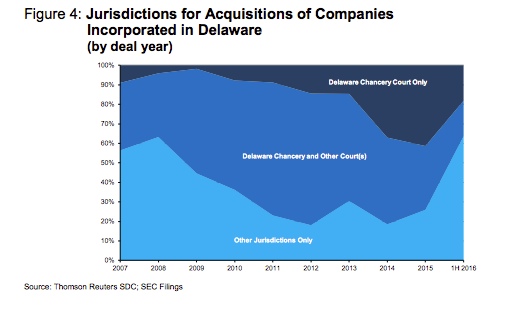 The rate at which M&A litigation is being resolved is slowing as well—possibly due to the difficulties that the Trulia decision presents. From 2009 to 2014, between 74 percent and 78 percent of M&A litigation was resolved prior to close. 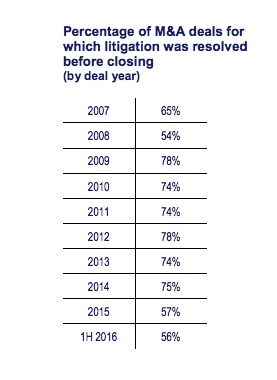 As the report points out, other courts in other jurisdictions will have the opportunity to adopt the Trulia decision, and the outcome could be historic when it comes to stamping out frivolous M&A litigation.

However, it’s worth noting that some companies now welcome being sued outside of Delaware, and in some cases are not asserting their choice of forum provisions to allow such cases to stand.

Why? Because these companies would like to pay a modest amount to the plaintiff attorneys in exchange for a full release of future claims, something Delaware’s disapproval of disclosure-only settlements no longer allows.

The “full faith and credit” clause (Article IV, Section 1) under the U.S. Constitution essentially says that if you can get a full release in one jurisdiction, it should release claims in any jurisdiction.

The Cornerstone report cites that a small number of disclosure-only settlements have been approved in state courts post-Trulia.

It’s interesting to observe that because of what Delaware did, defendants with choice of forum provisions in their bylaws really are in the driver’s seat: they have the ability to threaten to move to Delaware if plaintiffs don’t behave well at the start of litigation.

All of this is to say that there is some interesting game theory at play when you have Delaware saying no to plaintiff’s fees in disclosure-only settlments and a world in which some defendants don’t mind paying some money in order to obtain a full release for its directors and officers.

While it remains to be seen how this will play out, we do know that these types of suits are still a risk for Ds and Os whose companies are being acquired. To help reduce the risk of M&A litigation, it’s important that companies facing an M&A take the right steps.

I’ll discuss ways Ds and Os can minimize the threat of M&A litigation, as well as their own potential liability associated with this type of litigation, in my next blog post.