If you were a director of a public company that was involved in M&A activity in the last few years, it’s likely that you faced litigation. The narrative around M&A is both twisted and predictable:  M&A activity resulted in litigation 97.5 percent of the time in 2013, according to research by The Ohio State University Moritz College of Law.

While some of this litigation legitimately call to account directors who potentially breached their fiduciary duties, many of these cases are the result of a broken legal system.  In the current system, it’s often more economically efficient for a board of directors to settle out of court than to inflict on their shareholders the cost of rebutting frivolous plaintiff claims.

However, at least in the Delaware Court of Chancery, the tide may be turning when it comes to frivolous M&A lawsuits. The recent ruling in favor of Answers (Answers.com) is just one example of this.

But before we get to how the tide is turning, consider first the size of the M&A litigation wave. Specifically, it’s interesting to note that:

While M&A litigation is on the rise, Delaware seems to be one state that’s putting its foot down to stop unfounded shareholder claims.

For example, consider what happened when the Delaware-headquartered Answers called the bluff of plaintiffs’ claims that its directors “acted in bad faith” during its merger. The plaintiffs’ claims included the charge that “the CEO director and the two director nominees of the corporation’s primary venture capital investor were conflicted and controlled the board” during the deal.

In the end, the Delaware Court of Chancery sided with Answers. A memo by Paul, Weiss summarized the findings nicely:

Board did not consciously disregard its fiduciary duties – The court found that the board engaged in extensive negotiations with the private equity buyer, and that the buyer increased its offer price in light of the improved financials. Although the sales process could have been more robust, the board did not breach its fiduciary duties by conducting only a limited market check and had plausible business reasons for its response to the company’s improving financial condition.

Domination of the independent majority of the board by conflicted directors was necessary to support a breach of loyalty claim – In the prior Answers decision, the court had held that it was “reasonably conceivable” that three directors were interested because (i) two directors affiliated with a 30% stockholder (the “30% stockholder directors”) may have been influenced by the stockholder’s liquidity needs; and (ii) the CEO, who was also a director, believed he would retain his position only if a sale was accomplished. The court now held, however, that whether these conflicts existed was unimportant because the 30% stockholder directors and the CEO did not dominate or control the otherwise independent directors who constituted a majority of the board.

This isn’t the only case Delaware has frowned upon. Several recent cases have illustrated the court’s unwillingness to simply go along with every plaintiff assertion.

In addition, Delaware cases have seen a decline in both the mean and median amounts of plaintiff attorney fees being awarded. And it seems that plaintiffs may have taken note; as we can see by the following table from the Moritz College of Law study, as plaintiff fees have declined, fewer of these cases are being brought to Delaware: 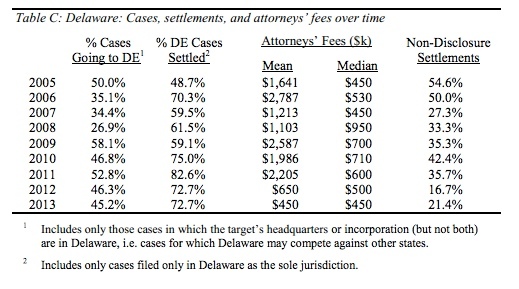 Unfortunately, as we know from the overall statistics when it comes to M&A litigation, suits that are not being brought in Delaware are being brought elsewhere.  In order for Delaware to be really effective at stamping out frivolous M&A litigation, more companies may need to include forum selection provisions in their charter documents—and other states will have to decide to respect these provisions.

It also helps to have a clear sense of what the law requires of directors when it comes to the sale of a company.  I’ll tackle this topic in a future post.