Proxy advisory services were founded for an important reason: large institutional investors who own shares in hundreds — if not thousands — of companies need an efficient way to decide how to vote annual company proxies.

Over the years, proxy advisory services have both expanded their mandate and become extremely influential. These services now take proactive steps to promote good governance. It’s a worthy goal. However, some have argued that the services are at best making ill-informed recommendations, and at worst, are at the center of a potential scandal involving undisclosed conflicts.

In addition folks are asking the question: Should proxy advisory services be regulated, given their influence?

The Securities and Exchange Commission has indicated a willingness to consider the issues. For example, in a recent meeting, the SEC openly discussed concerns about proxy advisory transparency and accuracy of their recommendations.

In that meeting, S.E.C. chairwoman Mary Jo White praised the aspects of proxy advisory that truly make good sense, saying the firms “clearly play an important role in the proxy process by, among other things, assisting investors in analyzing and considering how to vote their shares.”

Chairwoman White’s sentiment is, of course, correct. However, there are also a number of unsettling issues that have arisen in the proxy advisory world.

Institutional Shareholder Services, Inc. (ISS) – one of two most powerful proxy advisory services out there – recently made updates to the way it assesses corporations, with the ISS Governance QuickScore 2.0.

The new evaluation process replaces the old model it had in place previously, Governance Risk Indicators (“GRId”). Critics argue that the new method is ambiguous.

In a write-up by Wachtell, Lipton, Rosen & Katz, the firm pointed out what it believed to be some shortcomings:

Using an algorithm purportedly derived from correlations between governance factors and financial metrics, QuickScore will rank companies in deciles within each of ISS’ existing four pillars—Audit, Board Structure, Compensation and Shareholder Rights – and provide an overall governance rating to “provide a quick understanding of a company’s relative governance risk to an index or region.”

While one can understand, as a business matter, ISS’ desire to continually reinvent and ‘improve’ its products, the constant shifting of goal posts creates uncertainty and inefficiency. More important, QuickScore will likely provide a no more complete or accurate assessment of corporate governance practices than its predecessors, and it may be worse.

One of the concerns pointed out by many, including Wachtell Lipton, is that corporate governance is not an exact science that can be boiled down to a score of 1 to 10.

“Trying to quantify and rate governance practices is akin to trying to rate the attractiveness of people,” the firm said in its memo. And that “rating companies in deciles can be misleading and counterproductive. By definition, half of all companies will be below average.”

Are Director Elections About to Get Much More Difficult?

Some of the new factors introduced into ISS QuickScore 2.0 (which have been summarized in a memo by Wachtell Lipton) are quite controversial, and potentially disruptive in a dangerous way.

Consider the new factor relating to the percentage of votes by which directors are elected by shareholders. Although this is currently a non-weighted factor, it is far from benign and one to watch.

To understand the issue, we have to first take a step back and look at data provided by folks like ProxyPulse. This data show that in 2013, directors were elected with 95 percent shareholder favor. From its report.

In other words, shareholders of public companies generally felt that company directors deserved to be elected. Seems like a good result, one that indicates that most directors are doing the job their shareholders have elected them to do. 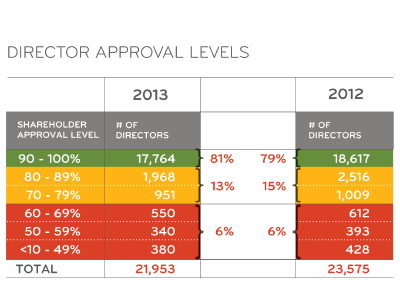 Keeping in mind these percentages, now let’s review the newest addition to ISS’ QuickScore 2.0 (from Page 5 of the QuickScore assessment document):

QuickScore will consider the percentage of directors who received less than average levels of approval upon election. Opposition to a board member typically signifies a perceived lack of accountability, responsiveness, independence, and/or competence on the part of the targeted director, warranting further evaluation.

QuickScore will consider directors who received less than 95% shareholder approval. ISS collects meeting results as they are available and this factor will be updated and recalculated accordingly [emphasis added]. Market applicability: U.S.

What this means, is that if a director receives any less than the industry average – 95 percent – you’re now at risk for being dubbed unfit for your position.

“In the Updated QuickScore Guidance, ISS clarified that the voting standard it will use in making this calculation is a ‘votes cast’ standard (i.e., the number of shares voted ‘for’ as a percentage of the shares voted either ‘for’ or ‘against, meaning abstentions are not taken into account).”

This is helpful, and it is not a fix to the bigger issue that ISS is creating.

The Problem with 95 Percent and What You Can Do

It is unclear what is the problem that ISS is trying to address. The elimination of broker votes and the implementation of majority voting have already addressed the oft-touted (but arguably never proven) concern that director elections are mere shams.

The new thresholds set by ISS for director approval rates usher in a bigger problem: ISS is arbitrarily setting a standard for re-election that is much higher than what corporate law contemplates.

Also, we all know that sometimes, bold leadership is necessary. When a company is in a tough situation, it is rarely the case that 95 percent or more of people will agree on the best strategy to move forward.

Unfortunately, ISS’ new standard will have the consequence of discouraging bold leadership and innovation. Instead, ISS is creating a situation in which “me too” behavior is what will be rewarded.

If you are a director, consider the following to address the ISS standard:

In previous years, if your average was 95 percent and this year, your “yes” votes came in at 90 percent, it may not have been a concern. But in light of these updates by ISS, it’s a good idea to proactively consider your annual proxy strategy, including a solid communication plan to shareholders and potentially employing a proxy solicitor.

The Future of Proxy Advisor Services

In a world where directors must tiptoe around the lines constantly being drawn and re-drawn by proxy advisory firms, it makes good sense to deal with these issues sooner than later. Reaching out to shareholders after ISS has recommended a “no” vote may be too late.

As for who will regulate the self-appointed proxy advisory firms? While the S.E.C. has shown some concern, exactly when action will be taken is anyone’s guess.

And an interesting side note: According to a recent announcement ISS’ parent company, MSCI Inc., is looking for an exit strategy that “may eventually lead to a full separation of ISS from MSCI.”