All things considered, an IPO is a relatively expensive way to raise money for a company: you not only have the costs associated with the registration statement, but also the ongoing compliance costs of operating as a publicly traded company. Notwithstanding these costs, IPOs are great fundraising devices when a company needs a lot of cash.

But what if your company wants to raise less than $50 million? The SEC has a new set of rules just for you. 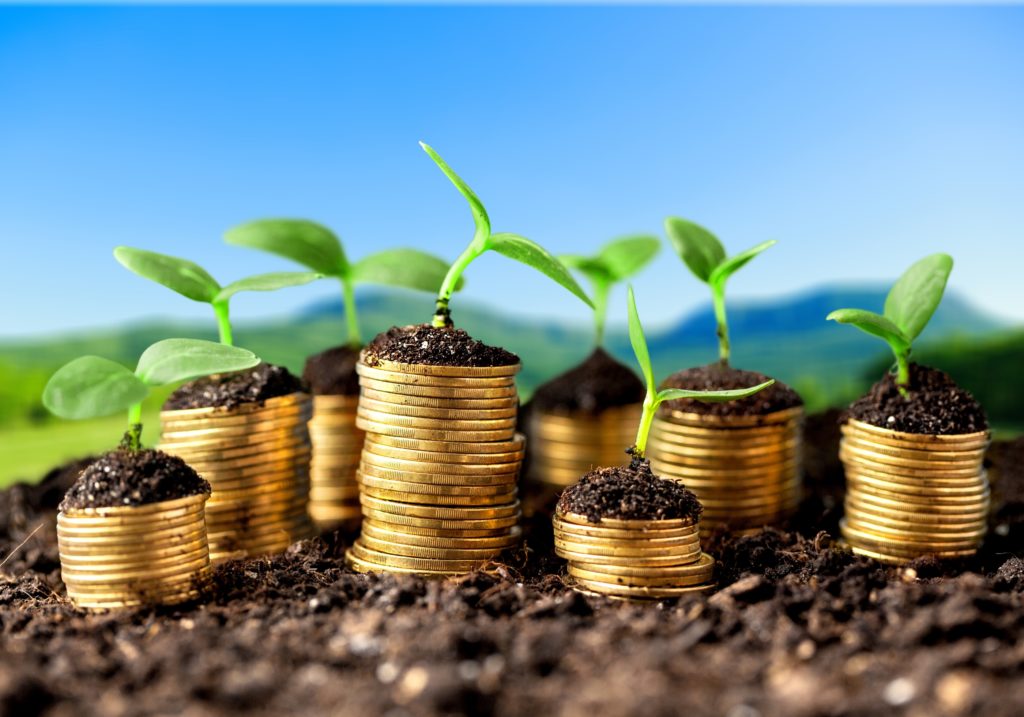 Last year, the SEC finalized an update to Regulation A, an exemption from registration under the Securities Act of 1933. The update, commonly known as “Regulation A+,” is designed to allow companies to raise money via an unregistered public offering that includes the solicitation of non-accredited investors. People are calling this a “mini-IPO.”

The updates to Regulation A at first glance seem promising … but some say it’s not all puppies and rainbows. And there are certainly issues like liability and insurance to consider as well.

Regulation A Gets Smarter

The original Reg A, an exemption from the registration requirements of the Securities Act of 1933, allowed private companies to take advantage of crowdfunding without registering those securities with the SEC.

While this concept was progressive, the original Reg A still had its quirks—quirks that made it tedious for companies to use. Investments were capped at $5 million within a 12-month period, and complying with “blue sky laws”  (individual state laws that require compliance with state securities laws) no doubt deterred some corporations.

The updates that the SEC made to Reg A pursuant to Title IV of the Jumpstart Our Business Startups (JOBS) Act are significant. The changes allow private companies to offer up to $50 million in securities annually.

The updated Reg A+ creates two tiers for securities offerings:

Each tier has slightly different criteria, and TechCrunch created a handy chart comparing the two, here: 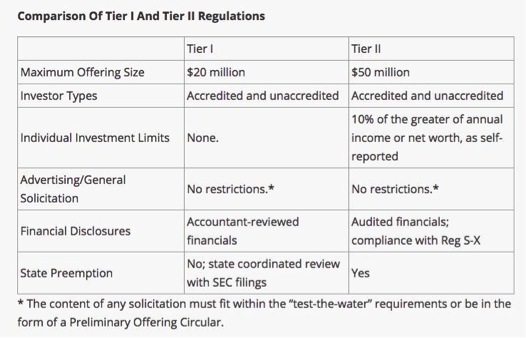 This limit was based on a historical belief that unaccredited investors (people with less funds to invest) were essentially at risk of being tricked or making poor investment decisions.

To be an accredited investor , you need to have an income that exceeds $200,000 in each of two prior years ($300,000 with a spouse) or a net worth of over $1 million excluding the primary residence.

Today, using wealth as a proxy for sophistication seems a bit strange. Clearly there are some investors who would not meet the definition of an accredited investor but are nevertheless very savvy. The SEC acknowledged this when it adopted these new rules, and also said that there still needs to be some protections.

SEC Chair Mary Jo White’s position (from this press release  announcing the rules) is that “there is a great deal of enthusiasm in the marketplace for crowdfunding, and I believe these rules and proposed amendments provide smaller companies with innovative ways to raise capital and give investors the protections they need.”

Tier 2 of the new rules, however, does limit the amount of securities that an investor who is not accredited can purchase to no more than 10 percent of the investor’s greater of annual income or net worth, or 10 percent of the greater of annual revenue or net assets at fiscal year end. There is no similar investment limitation on accredited investors.

Another major feature of Reg A+ is that companies can conduct their fundraising via a general solicitation. To the extent that a company is trying to reach a broad number of investors, being able to advertise to non-accredited investors—something that is typically not allowed if a company is using one of the exemptions from registration to raise money—is extremely helpful.

Not Everyone Is Giving Reg A+ High Marks

In this post at CrowdFundInsider.com, the author points out what she believes are the shortcomings of the new rules:

First – it turned out that raising capital under Reg A+ is much closer to becoming a public company than anyone might want to admit with too many disadvantages typical for a publicly traded company (high cost of reporting and high level of disclosure and scrutiny from regulators) but no visible benefits that a publicly traded company typically enjoys – which is an attention from institutional investors who are also capable of  boosting a rich coverage and triggering a demand from a retailer market aka crowd.

That’s when we might start to realize that the whole Reg A+ thing comes down to securing professional market-makers, researchers and getting first and foremost on the radar of institutional investors. That’s quite an unfortunate finding, as we thought that we should just have the most enthusiastic network on Facebook.

What to Watch for if Crowdfunding Is for You

If you’re a company that is considering crowdfunding, there are a couple things to reflect on in terms of liability and managing risk through insurance.

The first thing to know is that when you are offering any securities, all of your disclosures have to be accurate and complete.

While not at the level of an S-1 IPO disclosure statement, the disclosures required by Regulation A+ are significant. In addition, the offering circular has to be reviewed by the SEC. The SEC typically will provide comments, and there can be more than one round of comments.

In addition, Tier 2 companies must provide audited financials. They also have ongoing disclosure requirements. This excellent overview  from Morrison & Foerster describes the requirements of Reg A+ in detail, including reporting and disclosures.

“Crowdfunding” carries with it the connotation that regular people can get a financing done on their own. This is a huge mistake. The federal securities laws—even the Reg A+ rules—are complex and nuanced. Having good outside counsel to guide you is essential.

Companies that do Reg A+ offerings are still private companies, and we’d expect them to have private company D&O insurance . Remember, however, that doing a Reg A+ financing is sometimes referred to as a mini-IPO for a reason: you are inviting the general public to become your shareholders, so take the insurance side of things seriously.

Unlike when you are doing a round of financing with sophisticated investors who invest in a private company, your Reg A+ investors may end up surprised when your company fails to deliver the return they were expecting.

Disappointed investors who are not used to the frothy private company investment setting sometimes sue the directors and officers of the company that offered them a sour investment.

Be aware that a lot of insurance carriers are not as familiar with this type of fundraising compared to other types. For that reason, make sure that before you engage in a Reg A+ offering, you’ve confirmed that there are no issues with insurance and that your policy fully covers your Reg A+ financing.

Some carriers might attempt to impose a sublimit on your policy when you crowdfund. A sublimit means that the carrier is not offering the full limit to cover your exposure, but rather, a portion of it. So sublimits are to be avoided where possible.

Other carriers will require the company that’s doing a Reg A+ offering to give notice to the carrier in advance. It’s something worth remembering, because while carriers will ask about financing plans when they renew your policy, they don’t usually require notification of financings in the course of a policy year other than for IPOs (which requires a completely different program at that point).

For the right company in the right circumstance, a Reg A+ offering is a great way to raise money without registering securities.

Notwithstanding the folksy sound of the term “crowdfunding,” recognize that Reg A+ offerings carry real risks for Ds and Os. Your best bet is to work with experienced outside counsel and optimize your D&O insurance, just in case something goes wrong.