When you think of the Securities and Exchange Commission, you may not think of “high-tech” – but the SEC is trying to buck that stereotype by using technology to identify corporations making accounting mistakes and involved in fraud.

Pair this effort by the SEC with the fact that accounting issues have been an area of focus for the plaintiff’s bar for some time now, and the combination puts a lot of pressure on public company CFOs today.

Alleged wrongdoings in the area of accounting have always been a big driver of securities class action lawsuits. Woodruff Sawyer’s D&O Databox shows that the number of suits filed with accounting allegations rose in 2014. 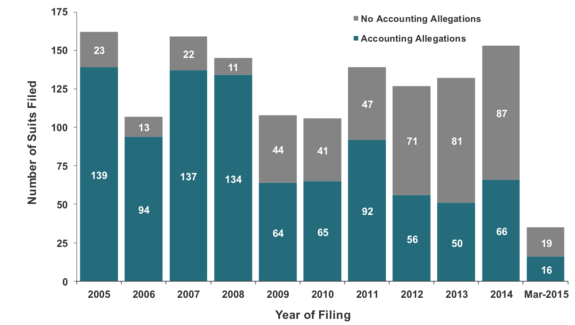 As an added layer to all this, there was a 44 percent increase from 2013 to 2014 in lawsuits related to accounting that also had SEC investigations attached to them, according to our Databox First Quarter Class Action Report.

Enforcement actions were up, too. The Wall Street Journal pointed out a 46 percent increase in accounting fraud enforcement actions by the SEC for FY 2014 (from 68 in FY 2013 to 99 in FY 2014). Still, the Journal calls the agency’s technology for targeting accounting wrongdoings “less revolutionary than many expected when it was unveiled in 2012.”

Still with the formation of a Financial Reporting and Audit Task Force in 2013, the SEC is clearly focused on its mission to detect fraudulent and improper reporting even on a more granular level than before the 2008 financial crisis.

In October, we took a look at the SEC’s FY 2015 Congressional Budgets Justification Report, which enthusiastically outlined the enforcement actions that had technology at play, and forecasts how it planned to use that technology in the coming fiscal year to lead to “earlier detection of fraud or suspicious behavior.”

In that interview, he discussed aspects of the technology in further detail:

The agency is proud of its ability to use the data sources that it has to shape investigations and ultimately cases and policy. A big part of that is analytics, and for public companies those analytics start with XBRL (eXtensible Business Reporting Language).

XBRL is the name for a computer markup language that uses standard definitions, or taxonomies, to allow computers to recognize data for sophisticated viewing and analysis.

Sikora highlighted the general use of the technology by corporations and the SEC:

A voluntary program for filing XBRL-tagged financial statements started in March 2005. In January 2009, the SEC issued final rules to phase in requirements that companies file with XBRL-tagged financial statements. When corporations use XBRL for their filings, they are submitting a treasure trove of tagged data to the SEC that it can use for analytics.

What can CFOs do?

What are some of the important steps to take in light of all this? I’d have to agree with Sikora when he says in order to stay off the radar, avoid being an outlier. Unfortunately, though, that could happen with something as simple as not having the coding accurate in the XBRL tags, according to Sikora.

Setting aside technical errors, consider the benefit of benchmarking where you are relative to your peers in how you are reporting and treating issues. Should you find yourself deviating form the norm, Sikora suggests that public companies should “consider disclosing additional details” and “document and be prepared to explain any differences from their peer group.”

With a heightened focus on not just detecting fraud but also mere accounting errors, the SEC and its technology are hard at work. This puts increased pressure on CFOs and their companies to be mindful of how other companies in their industry report their financials, as well as to ensure that enough time and energy is spent on detailed work like getting XBRL tags right.