Shareholder activism—the practice of shareholders pressuring management to take a particular action that management may not otherwise be inclined to take—has been with us in one form or another since the 1930s. When we use the phrase today, however, we are often referring to private investors, and the phrase is not necessarily complimentary.

Well-known shareholder activists today include high-profile figures such as Bill Ackman of Pershing Square Capital Management, Carl Icahn of Icahn Enterprises, and Daniel Loeb of Third Point Management. Notably, these shareholder activists tend not to be very interested in non-financial proposals such as divestment and other social policies. Their campaigns are financial.

Shareholder activism against relatively large companies is on the rise. The Financial Times shows that the number of companies valued at $10 billion or more with activist shareholders has more than doubled between 2010 and 2013. 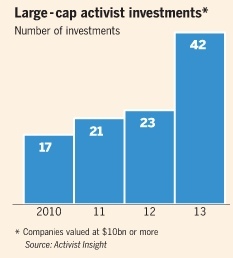 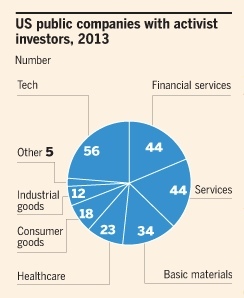 Shareholder activists mount campaigns for a variety of reasons. The data from McKinsey & Company show that shareholder activism has a real cost to public companies: between $10 million and $20 million per activist campaign, plus “weeks of management time to develop plans and meet with investors.”

But is this ever a good thing? Yes. According to McKinsey research, “shareholders generally benefit”:

Our analysis of 400 activist campaigns (out of 1,400 launched against US companies over the past decade) finds that, among large companies for which data are available, the median activist campaign reverses a downward trajectory in target-company performance and generates excess shareholder returns that persist for at least 36 months. 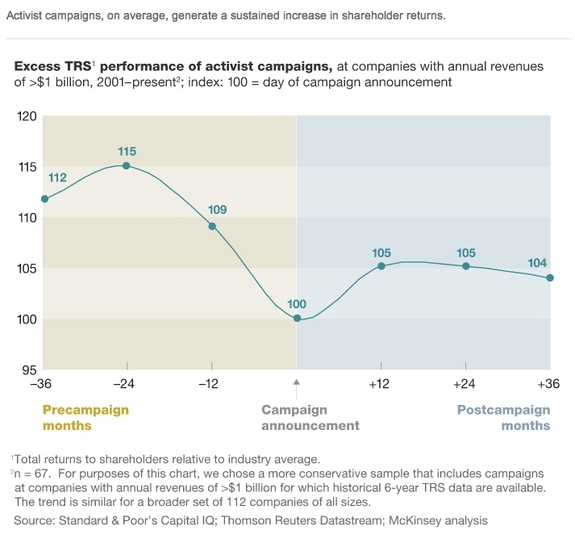 But note: there’s often a misconception that only companies that are doing poorly are targets of activism. The reality is that being successful doesn’t make a company immune from shareholder activists.

Apple is a case in point. David Einhorn of Greenlight Capital pursued Apple aggressively as an activist in 2012 and 2013, advocating a change in Apple’s capital allocation strategy.

After Mr. Einhorn dropped his challenge, activist Carl Icahn stepped up. There was plenty of speculation as to whether or not Mr. Icahn’s actions would hurt Apple in the long run. Although he ultimately stopped pushing the company for stock buyback, it was a bumpy affair.

Very often, activist shareholders are characterized as people who are willing to sacrifice long-term gain for short-term rewards. Is this true? From a board’s perspective, characterizing the motivations of shareholder activists probably isn’t a great use of time.

Boards have a clear duty to act in the best interests of their shareholders. As such, all boards, regardless of business success or not, should be ready to handle inquiries from activist shareholders.

So, how do boards prepare?

1. Before you have activists on the horizon, get smart on the issues.

The volume of activist hedge fund campaigns has exploded. Campaign numbers went from 27 in 2000 to 200 in 2013, according to Wachtell, Lipton, Rosen & Katz.

One of the best ways to get smart on the issues is to have a formal board briefing by outside counsel. Choose experts in the field. This is good corporate governance, and the briefing should be reflected in the minutes.

The key here is to start the education process well before activists come knocking. You don’t want to be caught flat-footed when the stakes are this high.

2. Be knowledgeable about appropriate defense mechanisms.

Shareholder rights plans (poison pills), classified boards, advance notice and director qualification bylaws … there are a lot of mechanisms that a board can implement to ward off inappropriate activist challenges to the business. However, the last thing a board needs is to deal with when being attacked is coming up the steep learning curve of these types of technical corporate mechanisms.

Board education on these topics ahead of time will help the board be better informed and more thoughtful in its response when its “go time.”

3. Continue to monitor your shareholder base and engage in constructive dialogue.

Having management monitor your shareholder base and meet regularly with your large institutional investors is a good first step, as is having a clear sense of your own company’s vulnerabilities.

Finally, if you are contacted by activist shareholders, take steps to respond.  Work with your outside counsel, and ensure that the board is acting as a whole.  It’s prudent for individual board members not to discuss matters with individual shareholders until counsel has been consulted and the entire board has agreed on a response plan.

Also keep in mind that Regulation FD applies even in the midst of tumultuous attacks by activists. However, it’s also the case that when shareholder engagement is warranted, boards should be careful not to hide behind regulation FD.

This is again a place where a board will be well served to have assessed options for specialized outside counsel in advance of actually needing advice on responding to an activist shareholder.

Finally, make sure you have good director and officer (D&O) insurance limits.  Things can get difficult when activist shareholders are on the scene. You’ll want to ensure individual board members are protected to the extent they can be, in case vocal shareholders pursue matters through modalities like suing directors and officers for breaches of their fiduciary duties.