According to data from Cornerstone Research, M&A litigation experienced a slight downturn in 2014. And these findings are consistent with other data recently published elsewhere, as Kevin LaCroix of the D&O Diary pointed out here. 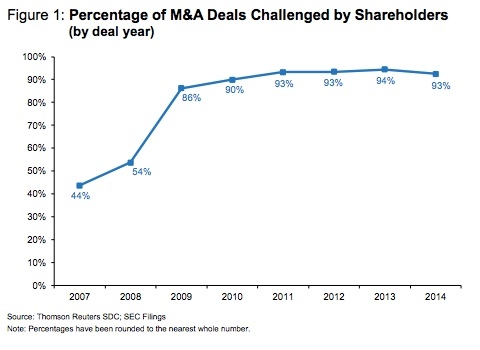 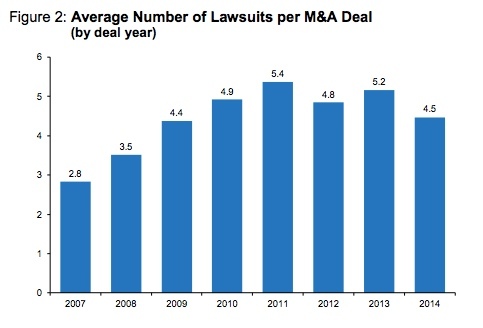 One troubling note: in the five years prior, more than 70 percent of M&A-related claims were settled before the deal closed. That percent dropped to 59 percent in 2014.

One data point, happily, is not a trend line—but the drop is worth monitoring.  Common wisdom suggests that M&A litigation that fails to settle before a deal closes and instead continues post-closing is more expensive than litigation that settles before the M&A deals close.

Why is the percentage of shareholder M&A challenges down for the larger deals? One reason could be that these cases are not all that lucrative for the plaintiff’s bar.

Per the Cornerstone report, only six (8 percent) of M&A-related suits that settled in 2014 resulted in plaintiffs receiving any compensation. This result has been fairly consistent since 2010.

However, it must be noted that when plaintiffs receive monetary compensation, it can be a lot of money. Of the six settlements described in 2014, one of them was for $137.5 million (Plains Exploration & Production Co.), one was for $70 million (Jeffries Group LLC), and one was for $29 million (Gardner Denver Inc.).

Most of the settlements for these types of cases are for additional disclosures.  This was the case in 79 percent of settlements in 2014.

Over time, the courts have become less and less impressed with these types of suits, and are not all that enthusiastic about awarding large plaintiff attorneys fees for what amounts to some extra words in an already very long proxy statement.

Another reason M&A transaction-related litigation may be losing steam could be related to the adoption of choice of forum provisions in corporate bylaws.  According to the report, more than 300 companies adopted such bylaws in 2014 and 2013.

Nevertheless, the Cornerstone data show a total of 608 lawsuits filed in 2014 – that’s 93 percent of all M&A deals valued at more than $100 million.

If you haven’t considered adopting choice of forum bylaws to help reduce multistate claims in the event you face litigation during a sale or acquisition, do so – and remember to ask your shareholders before taking any action.

If they agree that such bylaws would help protect the company from costly litigation, then you can confidently adopt the bylaws without the threat of unhappy shareholders and proxy services like the ISS taking action against you.

(As a reminder, ISS just updated its position on bylaws and may not view choice of forum bylaws the same way some corporations and shareholders do – that is, a way to maximize shareholder value.)

If you’re facing an M&A, get counsel on board early. Remember the importance of fulfilling your Revlon duties during a sale to help ensure the best possible outcome for shareholders.

Documenting your careful steps to fulfill your Revlon duties will also help should your shareholders file suit against you.

Also consider appointing an independent committee to oversee the transaction. In an earlier post on how to reduce D&O M&A risk, I outlined the following tips:

Form the special committee as early as possible to receive maximum value. Usually, this happens after management becomes aware that there is a serious offer forming, or right after the first offer comes in. However, it could be much sooner for reasons reflected in the next bullet point.

Have the special committee determine the scope of the types of offers and buyers the board will entertain.  You want to avoid prematurely cutting off avenues of discussion that might otherwise be fruitful.

Avoid delegating too much authority to any member of the management team.  Courts are very critical of allowing management to run a sale process with little or no oversight by the board, especially when management may have a reason to favor a particular buyer or set of terms that might be good for management but suboptimal for the shareholders.

While it’s likely that M&A litigation is here to stay for the long haul, it’s heartening to see at least a small one-year drop in the frequency of this type of litigation for bigger deals.

Perhaps this type of litigation will become less popular over time as corporate provisions and processes are adopted that both ensure a fair transaction and also discourage frivolous lawsuits.