It’s an exciting time for fast growing private companies, especially ones with aspirations for going public. In 2014, Alibaba Group raised $25 billion for its IPO and claimed the title as the U.S.’s – and world’s – largest.

But it wasn’t only Alibaba that raised big money in an IPO. JD.com – a China-based competitor of Alibaba – raised $1.8 billion in its 2014 IPO.

Of course, the “IPO boom” isn’t just a foreign phenomenon. Here in the U.S., we had some pretty impressive U.S. company IPOs in 2014, and we have plenty of contenders for IPO high-flyers in 2015.

Let’s look at the IPO landscape: past, present and future. If you’re interested in learning more about tech IPOs in person, check out a complementary event at the NYSE where Woodruff Sawyer partner Michael Ferraro will be speaking on March 12 (for more info, go here).

The report states 2014 saw more offerings raise more proceeds than any year since the tech bubble. 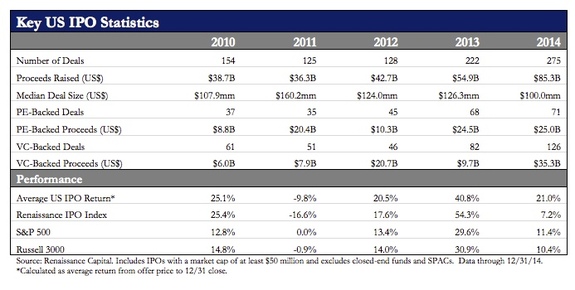 PwC proclaimed 2014 to be a banner year for tech IPOs specifically on the global scale, raising around 51 billion – that’s more than what we saw from 2011 to 2013 combined.

The explosion and adoption of the Internet software and services sector is apparent when looking at PwC data; the data show how much IPOs in this sector have grown since 2010. In fact, the majority of IPOs in the tech sector have been in this niche, with 2014 seeing 65 percent of them.

Contributing to the overall success of 2014 in the tech sector IPO, says PwC, were “strong capital markets, relatively low volatility during most of 2014, the reopening of the Chinese exchanges, and improvements in Europe all contributed to the strong performance.”

According to CB Insights, there are nearly 600 private tech companies worth watching carefully this year – some of which could be poised for IPOs in 2015. CB Insights evaluates these tech companies as part of its Tech IPO Pipeline analysis using public data predictive algorithms.

To make CB Insight’s list of companies to watch in 2015, companies must be valued at more than $100 million and demonstrate “significant momentum.” On that list are 42 companies that have raised a financing round “at a real or rumored” valuation of $1 billion or more.

Just a few from that list include the following West Coast and East Coast companies:

While the Bay Area has been a breeding ground for fast-growing tech companies (more than 300 on the Tech Pipeline list are in the Silicon Valley area alone), the industry is also growing very significantly in other tech hubs across the United States.

Notably, New York is a thriving environment for tech, second to California with 69 companies to watch on the docket, according to CB Insights.

All of this activity is prompting more discussion around IPOs for the tech industry specifically in New York. The event I mentioned earlier will be one to attend if you’re a tech company considering an IPO in the next two to three years.

The event – the 2015 “Pre-IPO Summit for Tech Companies” hosted at the NYSE on March 12 at 10 a.m. – will bring together some of the most informed professionals of Silicon Valley and Wall Street to share insights on how to have a smooth IPO. The agenda includes items such as a market update from Goldman Sachs and insights from Veeva General Counsel Josh Faddis, as well as information on critical topics ranging from investor concerns to legal considerations to financial function preparedness to—of course—insurance.

If you can’t attend the NYSE seminar in person this time, you might want to check out the NYSE’s IPO kit, which offers insights on the process, managing risk, understanding the obligations and more.  If you are concerned with D&O insurance for an IPO, here’s a great interactive PDF resource.

We hope to see you at the Pre-IPO Summit at the NYSE on March 12.