Coming off a high in 2014 and a less-exciting but still fruitful 2015, tech and life sciences company IPOs in 2016 took a sharp downturn, according to a new report by Fenwick & West: “Key Metrics for Recent Technology and Life Sciences Initial Public Offerings.”

Nevertheless, analysts remain optimistic about 2017. According to Renaissance Capital (in its “US IPO Market 2016 Annual Review” report) the forecast for 2017 has technology IPOs making a comeback: “With high-growth recent tech IPOs like Twilio and Nutanix trading very strongly, we believe that tech IPO activity will pick up significantly in 2017 and 2018, breaking the long IPO Recession of 2015-16.” 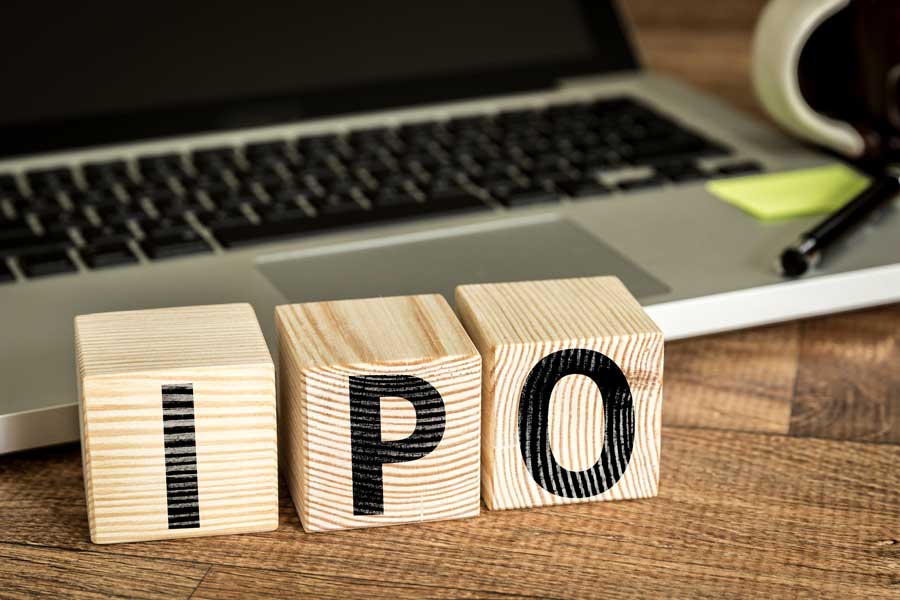 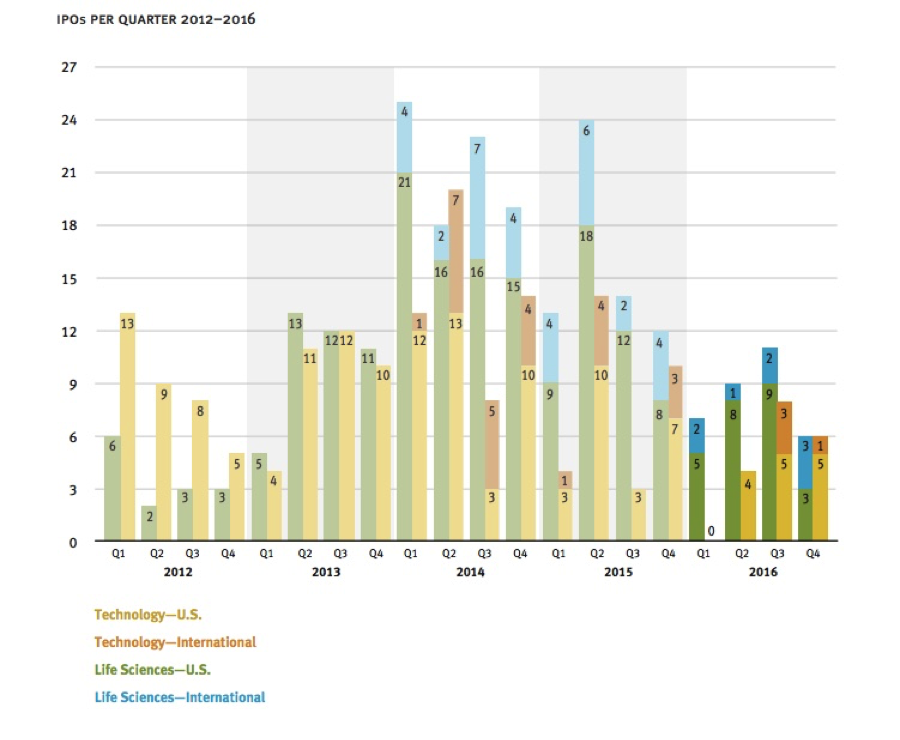 Still, the report shows the first half of 2016 was lackluster for tech IPOs—a total of four. The second half of the year picked up with a total of 14 tech IPOs, including US and international offerings.

Fenwick & West attributes the reduced level of overall IPO activity, in part, to “turbulence in worldwide equity markets in January 2016, a month in which no technology IPOs were completed.”

Life sciences IPOs fell short as well, seeing the lowest activity in the second half of 2016 since 2012.

The majority of deal sizes for both the life sciences and technology sectors were under $100 million, though Fenwick & West highlights that “deals in both sectors faced more positive pricing environments in the second half of 2016, at least in relation to the pricing objectives expressed in their road show prospectuses.” 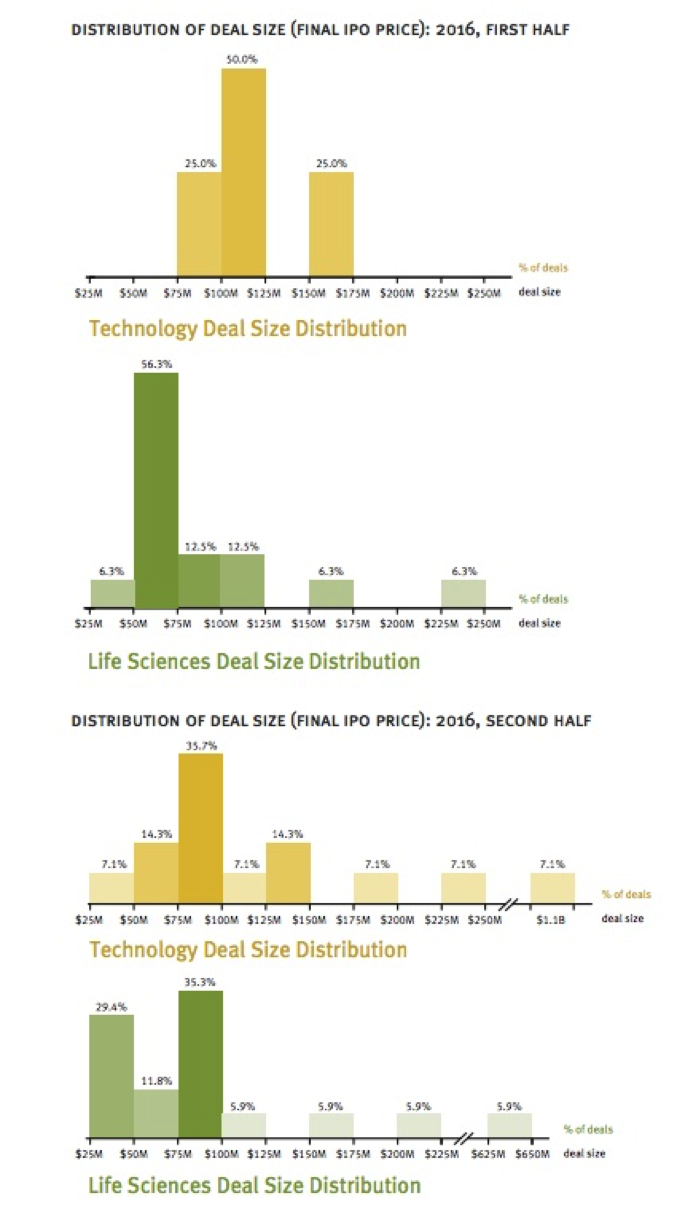 The following shows the percentage of tech and life sciences IPOs with the final price that falls above, within and below the red herring range in the first half of 2016 compared with the second half. 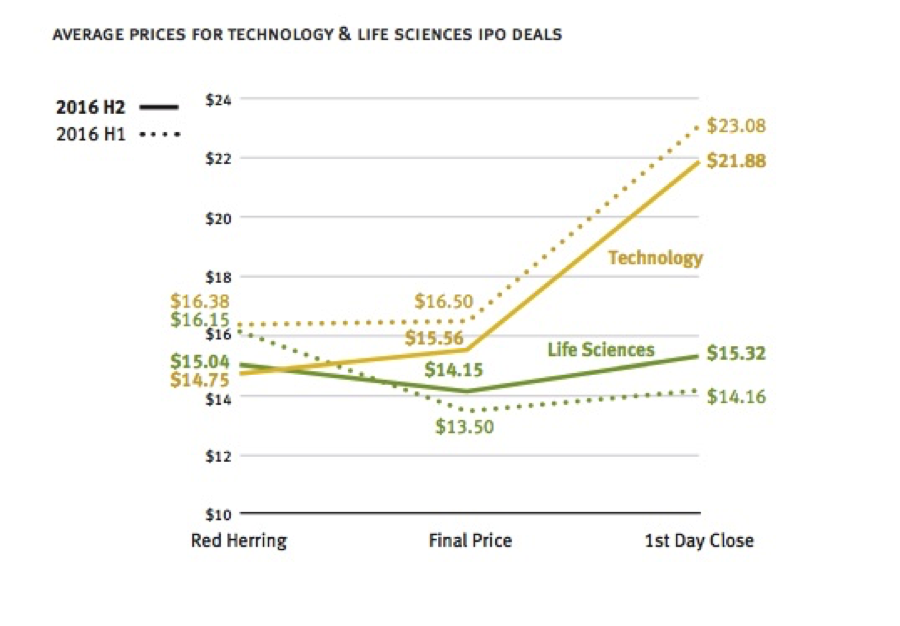 All was not lost for tech IPOs in 2016. Going back to the Renaissance Capital report, we see that one tech company fell into the category of the largest US IPOs for the year at $722 million (data through 12/15/16):

And, according to Renaissance, tech took the lead for best performing IPOs in 2016:

If you’re in the life sciences or technology sector and are considering an IPO this year, one of the important things you can do now is to get your director and officer liability risk management strategy in place. Working on this well in advance of your IPO makes sense.

Woodruff Sawyer’s own data show that approximately 20 percent of the total number of companies that went public in the past decade have faced a securities class action suit.

Ninety percent of these companies were sued within the first five years of going public, making IPO companies especially vulnerable to litigation—with tech and biotech companies leading the charge when it comes to class actions:

For more on how to coordinate your D&O insurance strategy with your IPO milestones, check out our updated 2017 “Guide to D&O Insurance for your IPO.”