There’s no doubt that prescription drug prices are taking a significant bite out of employee and employer budgets with no end in sight. Prescription drugs are taken by nearly 25% of the American population, making it a significant issue on a personal, business, and national economic scale. What is the current state of prescription drug costs—and what legislation is in place to alleviate high costs? 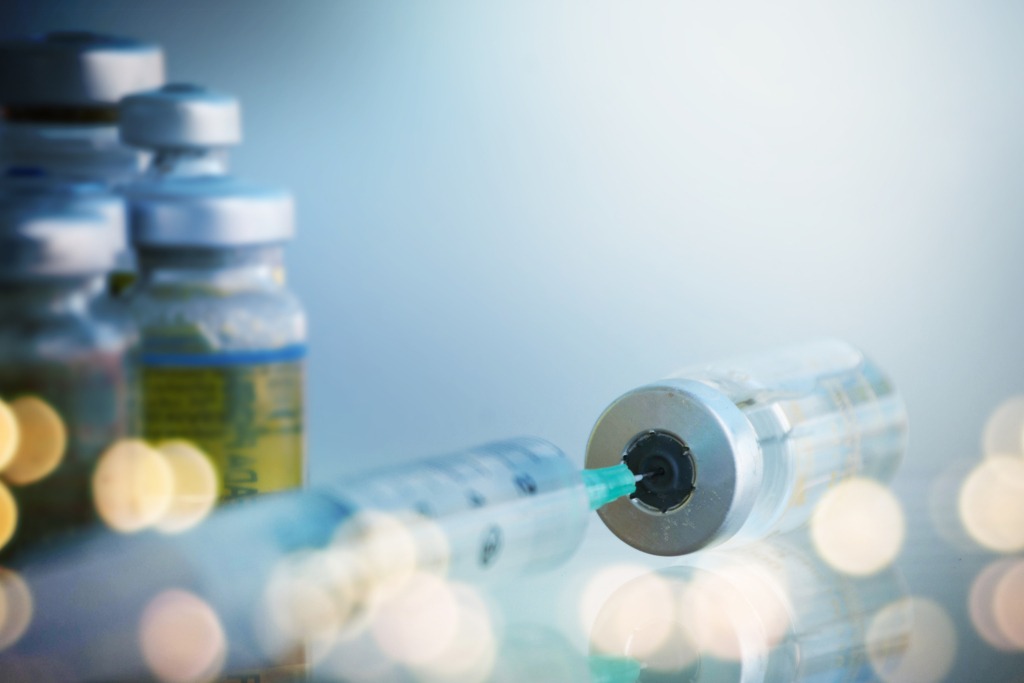 The Kaiser Family Foundation offers insights into the prevalence of prescription drugs in American society:

Most employer sponsored plans use a Pharmacy Benefit Manager to help control their drug spending and administer their program. If fully insured, they are typically an embedded partner of the health insurance carrier. If self-funded, this could be a carrier partner or a third party with no carrier affiliation.

Due to the increasing upward pressure on drug prices and employers that primarily rely on these Pharmacy Benefits Managers, all employers will have to manage their drug spend proactively. Private health insurance pays for an estimated 42% of all drug spend, or approximately $140 billion, surpassing Medicare, which accounts for 30%, or $130 billion annually. 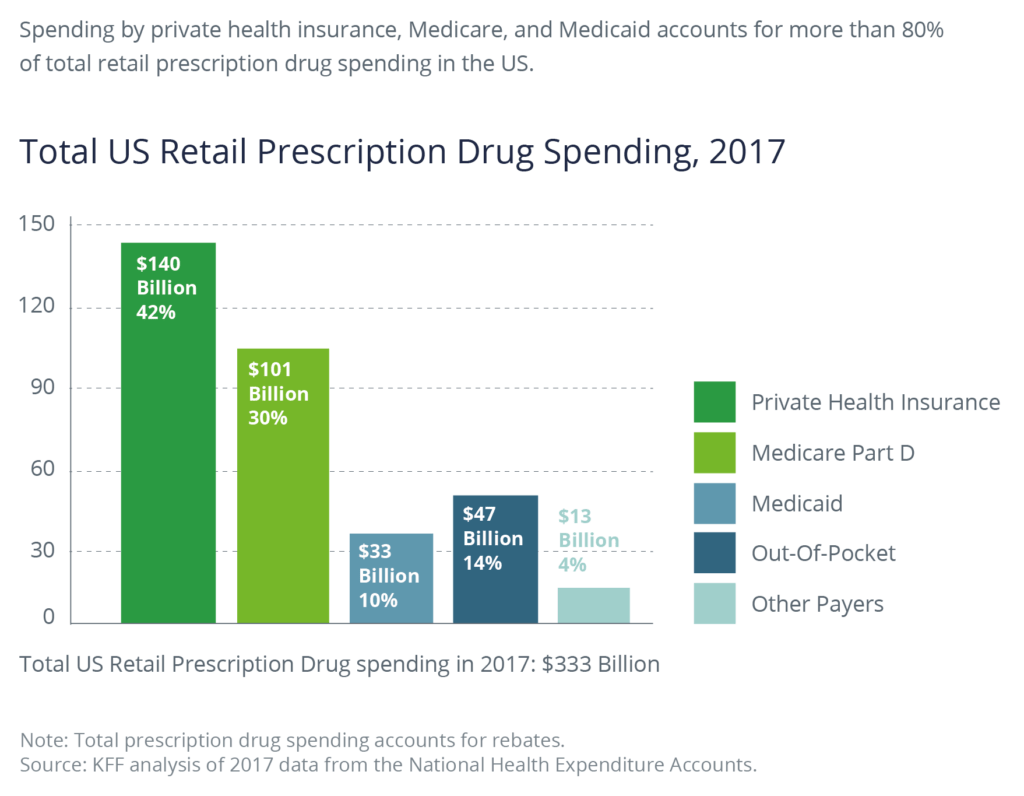 Pharmacy Benefit Managers negotiate with pharmaceutical manufacturers to lower the price paid by health insurers and pharmacies. While they have significant power to reduce the prices there is controversy over how they are paid.

PBMs are typically paid on a rebate basis––an incentive that represents a percentage of the cost of the drug. This has sparked debate because there are incentives for PBMs to focus on higher priced drugs because they are paid more. While this incentive program benefits PBMs, it may not benefit the groups that pay the actual price of the drug: insurers, employers, and consumers.

According to the Drug Channels Institute and based on market share of the 2018 pharmacy claims handled, the top 5 PBMs are:

The top three PBMs—CVS Caremark, OptumRX, and Express Scripts—control 78% of prescription drug market share. The question that is often asked is, why do drug prices keep rising if PBMs have significant purchasing power to lower costs?

To answer this question, PBMs are becoming more transparent. They have developed transparency tools and are beginning to share more of the rebates with employer-sponsored health plans. While these are good initial steps, there is more work to be done.

Who Pays for Rising Drug Prices?

While the role of PBMs is to lower costs, according to the Kaiser Family Foundation, but the groups that actually pay the cost of drugs in 2019 are:

However, the actual price that is paid varies across these groups. The major problem is that insurers and Medicare typically pay negotiated PBM prices and employees or insured individuals are charged the retail price for their copays and deductibles.

Employers and employees agree that there are changes needed to make needed prescription drugs more affordable and that changes need to be made to the current rebate model. In addition to market pressures, several pieces of legislation are in place at the federal and state level, as described below.

It is unfortunate when a rare disease strikes. It can be heartbreaking—and expensive—for the individual, their family, and their health insurance plan sponsor.

A recent article in the New York Times told the story of a 49-year-old woman afflicted with a rare genetic bone disease, who has been relieved of her excruciating pain by a new drug, Strensiq. Her daughter is also afflicted with the disease.

Her husband’s labor union, which sponsors their health insurance, has paid the lion’s share of the drug, to the tune of $6 million. While helping the afflicted family, the bill has threatened the union’s ability to provide health insurance to the rest of the union’s membership.

Employers, health plan sponsors, and employees are having to make tough choices between using expensive medications to treat rare diseases or trying to live without them. Meanwhile, the drug companies continue to develop rare and expensive drugs because it increases their profit margins.

“This legislation would require the Secretary of Health and Human Services to make sure that Americans don’t pay more for prescription drugs than the median price of the following five countries: Canada, the United Kingdom, France, Germany, and Japan. If pharmaceutical manufacturers refuse to lower drug prices down to the median price of these five countries, the federal government would be required to approve cheaper generic versions of those drugs, regardless of any patents or market exclusivities that are in place.”

After listing several well-known drugs that have significant difference in US and international pricing, the bill summary goes on to say:

This is not a radical idea. According to the European Commission, using international drug prices as a benchmark in price negotiations is “the most commonly applied pricing policy in European countries.” The US, where Medicare is legally prohibited from negotiating drug prices for seniors, is an outlier.

This is one of the few pieces of legislation that would directly benefit private insurers like employers and their employees to lower costs. This bill was introduced to the Senate, but has not been assigned to a committee.

With the perfect storm of rising drug prices, pharmaceutical companies focusing on the profit of high-priced specialty drugs, power of PBMs, and inequity of consumer retail pricing, in May 2019, a bill was introduced in congress: The Prescription Drug Rebate Reform Act of 2019. The purpose of the PDPRA bill is:

The Prescription Drug Rebate Reform Act of 2019 would require all patients’ coinsurance obligations be set as a percentage of net price, rather than list price – before or after a deductible is met. The bill would go into effect for all insurance plan years beginning on or after January 1, 2021.

The bill was introduced into the Senate in May 2019 and into the House of Representatives in July. Both the Senate and the House have referred them to committees for review.

While not considered to lower drug prices, it would lower the Medicare out of pocket cap to $3,100, which would be beneficial to seniors and Medicare recipients. There is also discussion that Medicare should be able to negotiate prices, like private sector PBMs. The bill may also include discussions about passing discounts to consumers at point of sale. Time will tell.

Many states are not waiting around for federal legislation. They are developing programs, both intra-state and inter-state, to lower overall drug spending. Progressive action that is currently taking place includes:

Minnesota Multistate Contracting Alliance for Pharmacy (MMCAP) has been in place since 1985, and negotiates pricing for non-profit agencies (who have authority to use their state’s procurement system) in 50 states. Discounts are based on volume, not formularies which public agencies can be a source of disagreement. Public health agencies make up 44% of MMCAP’s membership.

Many of the state consortiums are targeted toward state agencies that include Medicaid, Department of Corrections, and other similar state welfare agencies.

Will These Bills Lower Drug Costs?

In a word; no. There is still more work to be done.

Federal and state legislation is still under advisement so employers remain heavily reliant on existing PBMs and programs that can analyze, monitor, and control pharmacy spend. Until then, employers will rely on data analytics and expert advice to help them choose the right prescription medication plans for their organization and keep costs in check.

At Woodruff Sawyer, we help our clients make cost-effective, competitive employee benefit plan decisions that attract and retain staff members. For more information on how to lower pharmacy costs and maintain quality, contact us.