In this blog I am focusing on the growth in frequency, the nature of distribution and their first time stats on severity of pay-outs. The results are interesting. As the single biggest provider of reps and warranties insurance, AIG is uniquely placed to provide the broadest insight into claims activity and for a second year in a row they have.

AIGs original report covered the period 2011-2014 and reflected a frequency of around 1 in 7 or 14% of policies producing claims.

However, if we add 2015 policies, overall frequency is 18% (a four point jump for year on year comparison). Why? A few theories are;

AIGs last report showed a similar distribution with the greatest number of claims coming from the biggest  deals. The other change is that previously the smallest deals also had peak numbers, but that seems to be a trend that is less pronounced this time.

Deals over $1bn have the highest claims rate

So why do the largest deals have the most claims?

Here are a few theories:

How much are insurers really paying?

Until now, actual statistics around pay-out numbers were thin on the ground. Anecdotally we knew claims were getting paid and that this market is still keen to prove itself, but a bigger picture was hard to find.

For the first time AIG has included severity. Their figures do not include claims for less than $100,000 as they are deemed “non-material”. So how does it play out?

Multiple medium-sized claims paid as well as a few large ones. 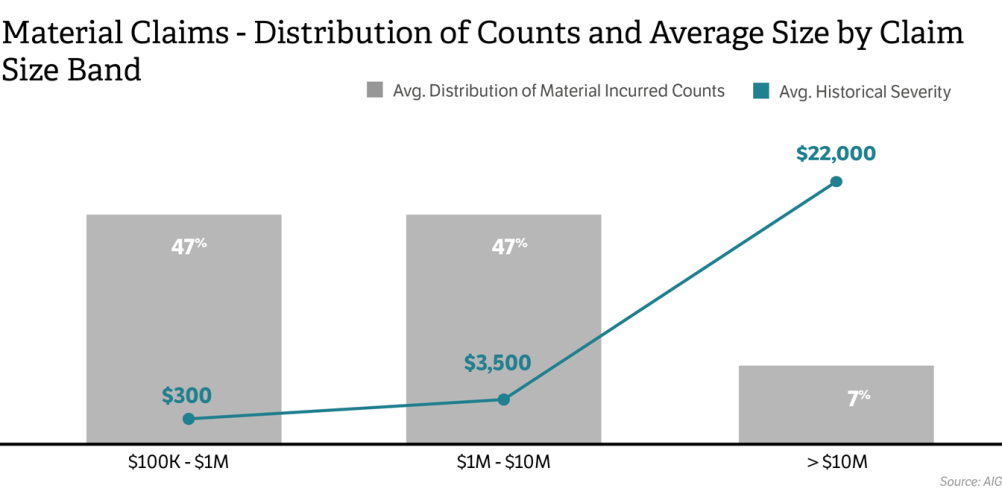 It is also worth noting that final numbers may well be higher as this figure does not take into account excess layer claims above AIG’s primary pay-outs.

All these figures strike me as very consistent with a maturing market and product. Every seasoned carrier has had their wordings raked over by a multitude of law firms and brokers. We at Woodruff Sawyer are being asked more and more frequently for the claims experience of carriers as part of the early decision making process.

So what does this all mean for you?

Our advice remains the same in this area of claims. This does not need to be an adversarial process. The biggest debate is usually getting everyone to agree on the size of the damages. Then, the process becomes fairly simple. The best result is always achieved if Insured, broker and Insurer work collaboratively to get a good outcome. To make that happen, we recommend; reaching out to your underwriter as soon as anything looks troublesome, providing as much information as you can up front about a potential claim and assuming we are all on the same side.