Fortunately, there are some good resources when it comes to helping directors and officers understand the D&O litigation against biotechnology and life sciences companies.

The recent “Securities Class Actions in the Life Sciences Sector” report by the law firm Sidley provides a ton of data and commentary on the latest when it comes to life sciences litigation.

The year 2018 saw 48 new class actions filed against publicly traded life sciences companies, according to the report. The report noted that while this was slightly down from 2017 and 2016, it still reflects the upward trend for class actions in this sector.

Sidley’s report is consistent with recent data from Woodruff Sawyer. We recently observed that there has been a 172% increase in class action filings against biotechnology companies when comparing the five-year period spanning 2009 to 2013 versus the past five years (2014 to 2018). 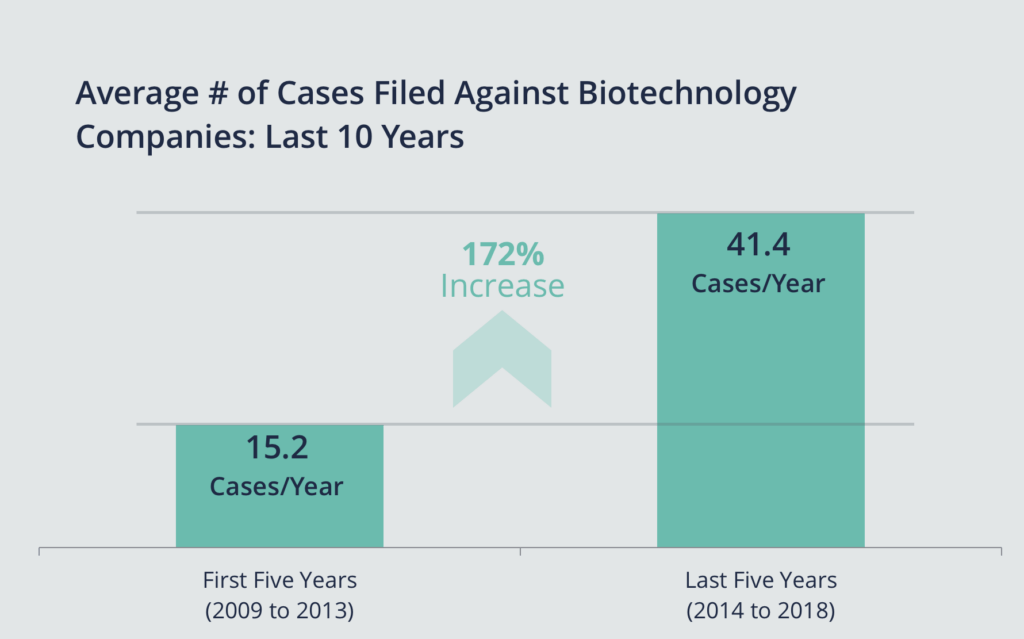 Further, in 2018, biotech held the No. 2 spot when it came to all securities class actions filed against issuers of common or preferred stock listed in the United States, according to our data. 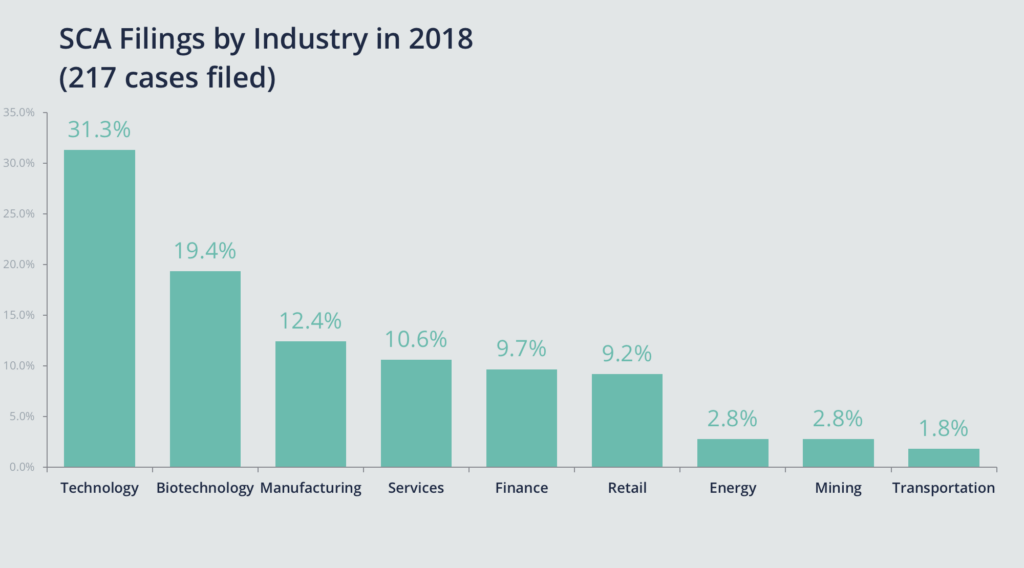 When it comes to actual settlement dollars by industry, biotech was in sixth place. That may seem like good news for those in biotech, but I’ll discuss some of the implications of this later when it comes to insurance. 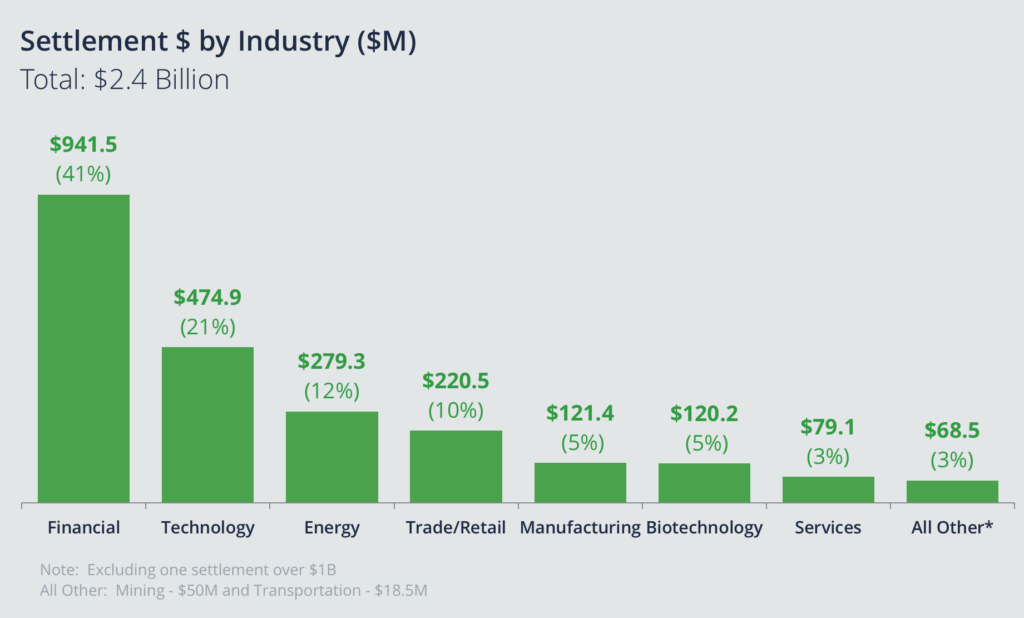 As in past years, the Sidley report divides its data analysis between cases against companies in the pre-approval stage (that is clinical trials and pre-clinical studies) and those in the post-approval stage: launch and product marketing. 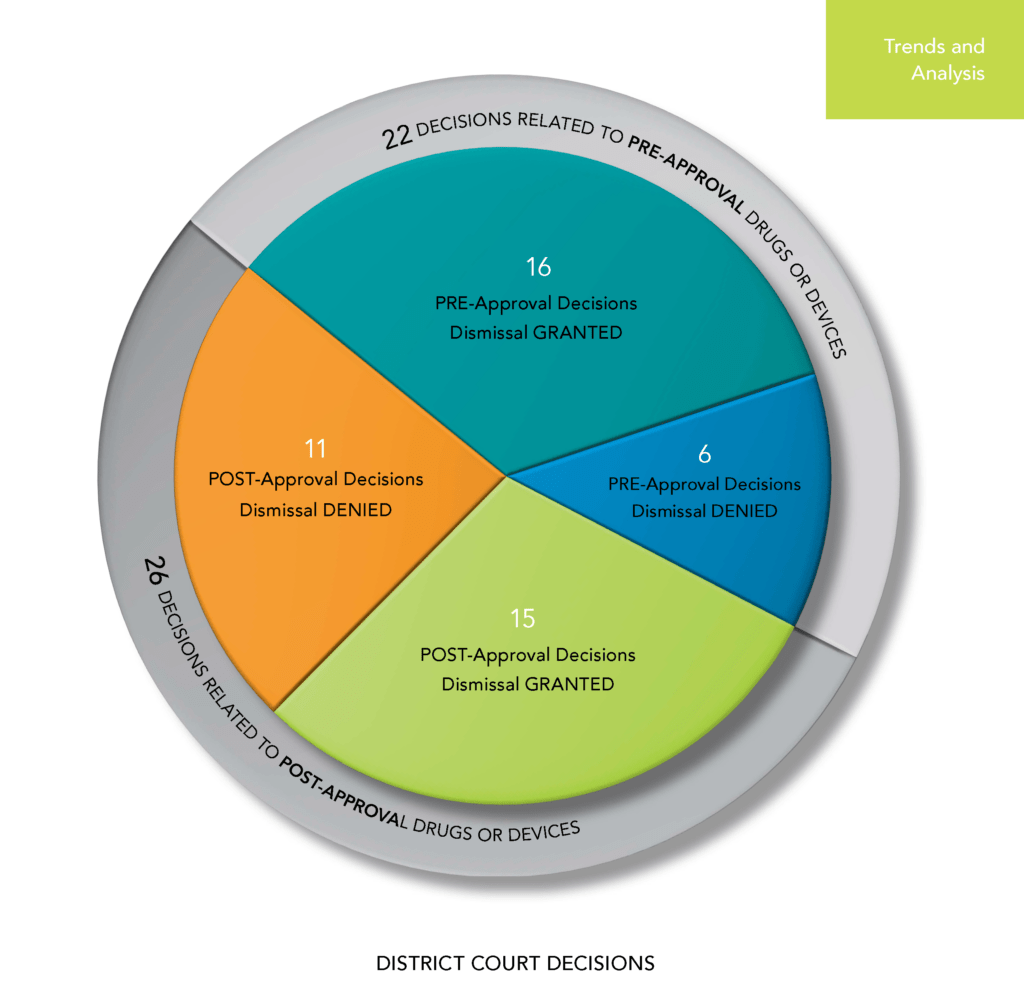 A majority of defendants prevailed on a motion to dismiss in 2018, too. Companies won dismissal in 31 of the 48 decisions issued by the district courts (65%).

In 2018, plaintiffs filed lawsuits against pre-approval companies in the following categories:

Many of the cases with companies in the pre-approval stage had to do with those companies making statements about preliminary or interim results in the context of ongoing trials.

Notably, in Khoja v. Orexigen Therapeutics, we learned that reporting on favorable interim results also means a duty to disclose unfavorable results in the future, too, even if those future results are also preliminary and not final.

The Sidley report weighed in, stating that, “Companies prevailed on motions to dismiss where they remained silent on the subject of interim trial results, or where they could point to a record of periodic rather than current reporting of such results.”

When it comes to post-approval cases, in 2018, plaintiffs filed lawsuits against post-approval stage companies with allegations including the following:

• Improper actions on the behalf of drug companies with third parties like physicians, pharmacy benefit managers, etc.
• Price fixing in the generic drug industry, which has turned into multijurisdictional antitrust cases

With regards to improper actions, the Sidley report summarizes:

Several of the decisions from 2018 relate to allegations that manufacturers improperly induced intermediaries to provide favorable treatment for their products—whether the manufacturers’ aim was to include those products on formulary lists, to increase prescriptions, or to obtain reimbursement.

Several of the cases against these companies were dismissed due to such things as:

Price fixing in the generic drug sector has been at the center of much controversy as well, as many companies come under the microscope and face litigation for alleged bad behavior.

After Mylan announced a $465 million settlement with the US Department of Justice for misclassifying the EpiPen drug for purposes of the Medicaid Drug Rebate Program, shareholders sued.

Allegations included Mylan’s failure to include its anti-competitive practices as a source of its inflated income.

The court observed, “While intentional misclassification and anticompetitive conduct are both unlawful in their own right, illegal conduct does not in of itself constitute a securities violation.”

However, the US District Court for the Southern District of New York observed that Mylan disclosed its sources of income, and its failure to note that its income was knowingly inflated as a result of its misclassification and anti-trust efforts was misleading.

While actual settlement dollars in 2018 were less in comparison to other industries, it’s worth understanding the settlement trends for cases filed against biotechnology companies in the last decade.

According to Woodruff Sawyer data, over the course of the past 10 years, we’ve seen $1 billion of the total $3.3 billion paid out by small- to mid-cap biotechnology companies valued at under $10 billion.

And, the majority of these total settlement dollars (75%) were from cases that settled in the past five years ($751 million of $1 billion).

All of this has put tremendous pressure on the insurance market. In 2019 insurance underwriters are taking a much more critical look at the pricing of D&O insurance for biotech / life sciences companies.

This is especially problematic for smaller, younger companies that are raising money—including through an IPO—in order to fund research.

These are exactly the companies facing major increases in self-insured retentions (like a deductible) and premium prices.

Adding to the trouble is the Supreme Court’s 2018 decision in Cyan. As the Sidley report also notes, Cyan may embolden the plaintiffs to bring Section 11 cases in state courts that would have been considered too weak to survive a motion-to-dismiss pleading in federal court.

In some cases, considering alternative structures such as those outlined in my article, “6 Ways to Reduce Your D&O Insurance Premiums,” might be helpful.