Silicon Valley is a powerful economic engine with a C-Suite roster that includes much of the who’s who of the tech world. Each year, executive search firm Lonergan Partners publishes their “Who Runs Silicon Valley?” report. The most recent edition focuses on the C-Suite—the senior functional executives running the top public tech companies in Silicon Valley.

The Silicon Valley 150 got smaller.

The major headline from the report is this: shrinkage. The report observes that 18 companies of the SV150 were acquired in 2016, and 2017 tech IPOs in no way made up for this loss. Of course, there are other tech companies to fill out the ranks, but since they are smaller companies, the average revenue for the whole is down.


It’s commonly asserted that Silicon Valley doesn’t value experience. Perhaps the statistics from the report on CEO turnover reflect this: the replaced CEOs averaged 9 years in their position. Forty-six percent were chairmen of the board. Thirty-eight percent of these were considered founders. The average age of the new CEOs was 49 years old (the average age of the CEOs this new batch replaced was 53).

The incoming CEOs were all male, replacing all male CEOs.

Women leaders of the SV150…

Women in tech continues to be a nationwide discussion. The report looked at the status of women leaders of the SV150 and found:

There was also a notable difference in the voting power held by women CEOs versus male CEOs. The report found that, per 2017 proxies, just seven women had voting power of over 1 percent. Contrast that with 118 male management team executives (9 percent of all men) who had reportable voting power of more than 1 percent.

Compensation for women was arguably a bright spot.

While the news on the gender equality front wasn’t great, the report did note that women had slightly higher than average compensation than their male counterparts for the period measured. However, this data was skewed by five highly compensated women:

A corporate commitment to leadership diversity is something on the minds of all public companies today. The Lonergan report defined diversity as gender, age, foreign-born and outside talent. Using this criteria the report found:

A high percentage of founder-CEOs under the age of 45.

(To learn more about the next generation of boardroom leaders, and how they are impacting companies in Silicon Valley and beyond, check out an earlier post I wrote here.)

A high percentage of CEO-founders as foreign-born innovators.

The Lonergan report is a good read for anyone looking to drill into the question of who runs Silicon Valley. The demographics for the entire SV150 population studied are in the following chart: 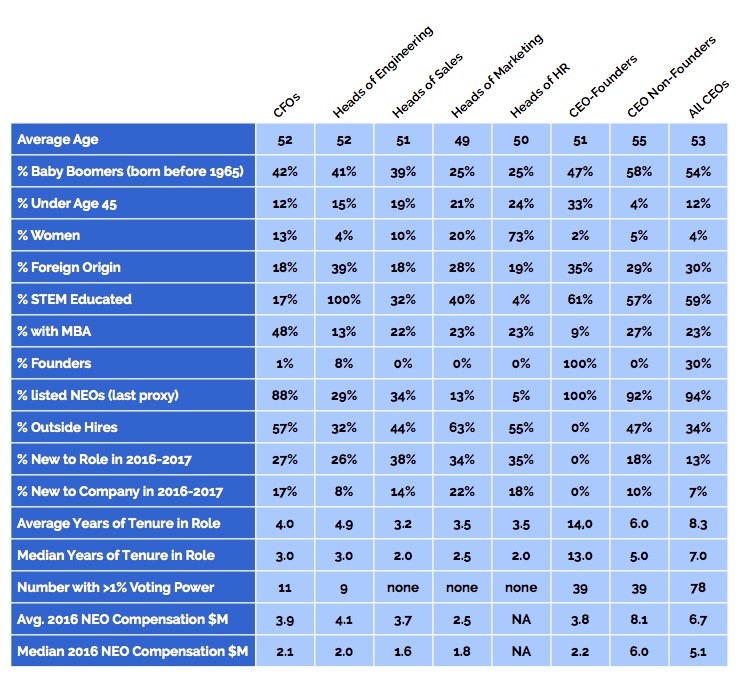 To find out more from the report, including the typical profiles of executive roles like CEOs, sales, marketing and more, check out the full report here.