If you have followed the IPO market over the last couple of years, you must have seen the sharp rise of SPAC IPOs and the record-breaking amount of funds that they have raised. Raising money is one thing, but spending it is a whole different ballgame. How SPACs (which stands for Special Purpose Acquisition Company) have played it and whether they can play it better with M&A Representations and Warranties insurance (RWI) is the question of the day.

Private equity firms realized early on the benefits of RWI and were the pioneers of the product in the United States. 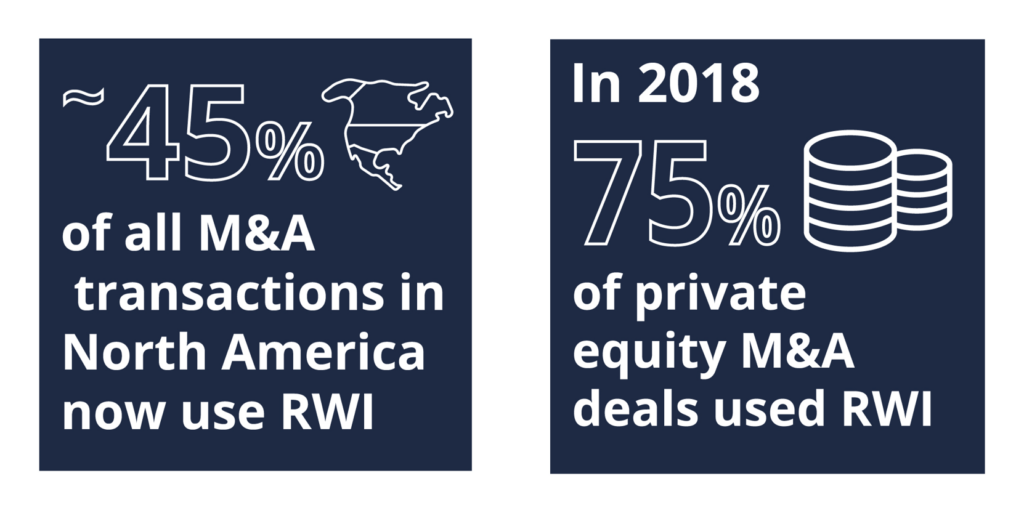 Over the last year and a half, however, the use of RWI has expanded outside the private equity space. More and more strategic buyers are embracing the product. According to various reports and anecdotal data 40%–50% of policies currently underwritten are being used in deals involving strategic buyers. There is also a lot of talk of the product expanding into the venture capital world, although, so far, without much traction.

SPACs have, until recently, been on the sidelines of the action. But savvy SPAC management teams are now realizing how they can turn the benefits of using a reps and warranties insurance policy in their favor.

SPACs are special purpose, non-operating companies that consist of a seasoned management team, called the sponsor, which raises capital through an IPO, then uses that capital to acquire and operate a business. It files an S-1 registration statement with the Securities and Exchange Commission to do so. The investors in a SPAC are looking to combine the skill and expertise of an experienced management team with an operating business.

Initially, SPACs are not operating companies, but are, like their name suggests, special purpose vehicles consisting of a seasoned management team and not much else. The idea here is that the skill and expertise of the management team, applied to a business with some potential but lacking in funds and management talent, can bring lucrative returns to investors. SPACs are slowly but surely gravitating towards the use of RWI in their post-IPO acquisition phase, fondly referred to as the de-SPACing phase.

Why Should SPACs Think About RWI?

SPACs face many hurdles as they go through the IPO and the subsequent M&A process. One of the major ones is the typical requirement that the acquisition must be completed within a specified period after the IPO––usually 18 to 24 months. If it is not so completed, the SPAC must be dissolved, and the funds raised in the IPO must be returned to the investors. This requirement clearly puts additional pressure on the acquisition process and is one of the reasons why some savvy SPAC management teams are now considering the use of RWI.

The availability of private funds ready for deployment and looking for investment opportunities, coupled with the dearth of companies going public has created a very competitive M&A environment over the last few years. Added competition from private equity, venture capital, and strategic buyers has resulted in a strong seller’s market, in which buyers grasp at any opportunity to differentiate themselves from the pack of eager suitors.

In a private M&A auction process the buyer can offer a fair price and ask the seller to agree to indemnify the buyer and set aside escrow funds to protect it from potential risk. Doing so will almost certainly disadvantage that buyer vis a vis its competition. The reason is that those competitors will, more likely than not, build the RWI into their offer. The RWI will allow them to offer the same price, but with minimal or no seller indemnity and with minimal or no escrow. Because RWI is now almost a market standard in an auction process and is likely to be offered and used by the rest of the competition, excluding RWI from its offer effectively puts a buyer at a serious disadvantage.

For SPACs that are under extra pressure to close their acquisition transactions before their post-IPO 18- or 24-month deadline runs out spending management time and efforts on failed auction processes can be fatal.

Before 2017 any respectable insurer would have told you that RWI would not make economic sense for a SPAC. SPACs were not raising that much money and the premiums and costs of insurance placements would just not make a good business case for the SPAC management team.

Over the last two and a half years, however, SPACs have made themselves known not only in the IPO space, where they now command a large chunk of the total US IPO market, but also in the M&A space. In 2019 alone, according to SPAC Research, 42 SPACs completed an IPO process and raised $10.2 billion with an average raise of $243.3 million. The typical acquisition deal size for a SPAC, according to SPACInsider.com, is between two-to-five times the IPO proceeds. 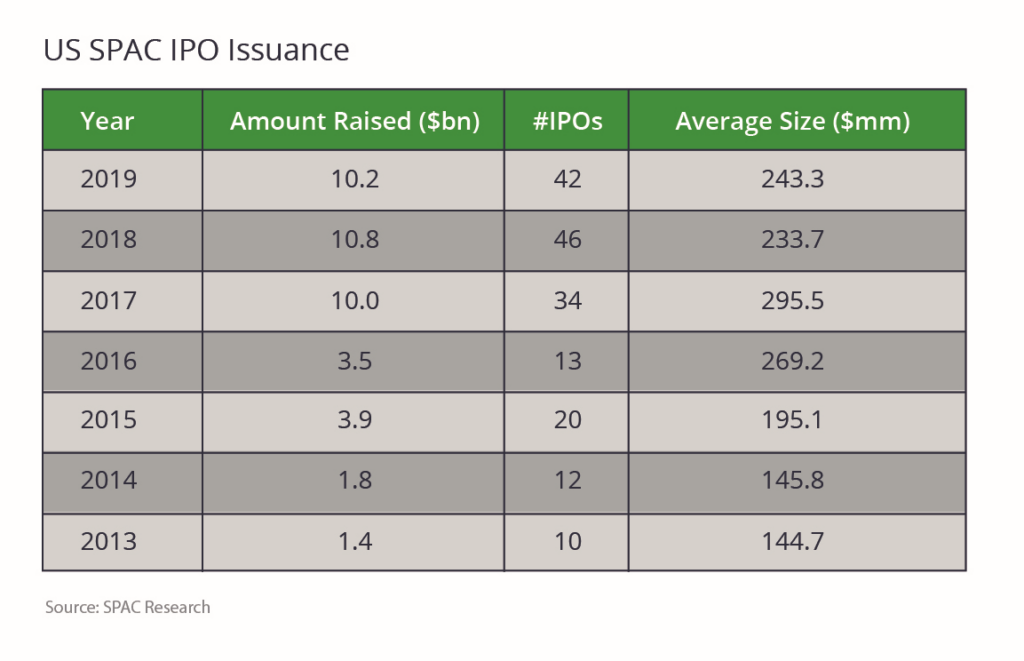 SPACs have grown substantially as a percentage of total US IPOs over the last three years to the point where they now represent almost 25% of the annual IPO count as well as about 20% of the annual amount of funds raised through IPOs. 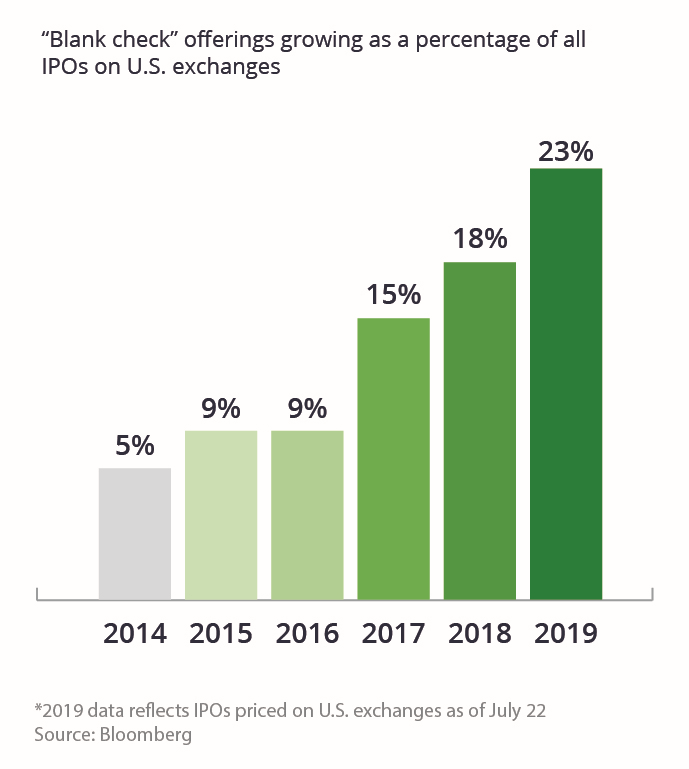 This growth is attributed to the entrance into the previously looked-down-upon SPAC world of larger, more sophisticated financial backers and financial and legal advisers. Headlines and famous names, the likes of Virgin Galactic’s Richard Branson, have also made some waves. 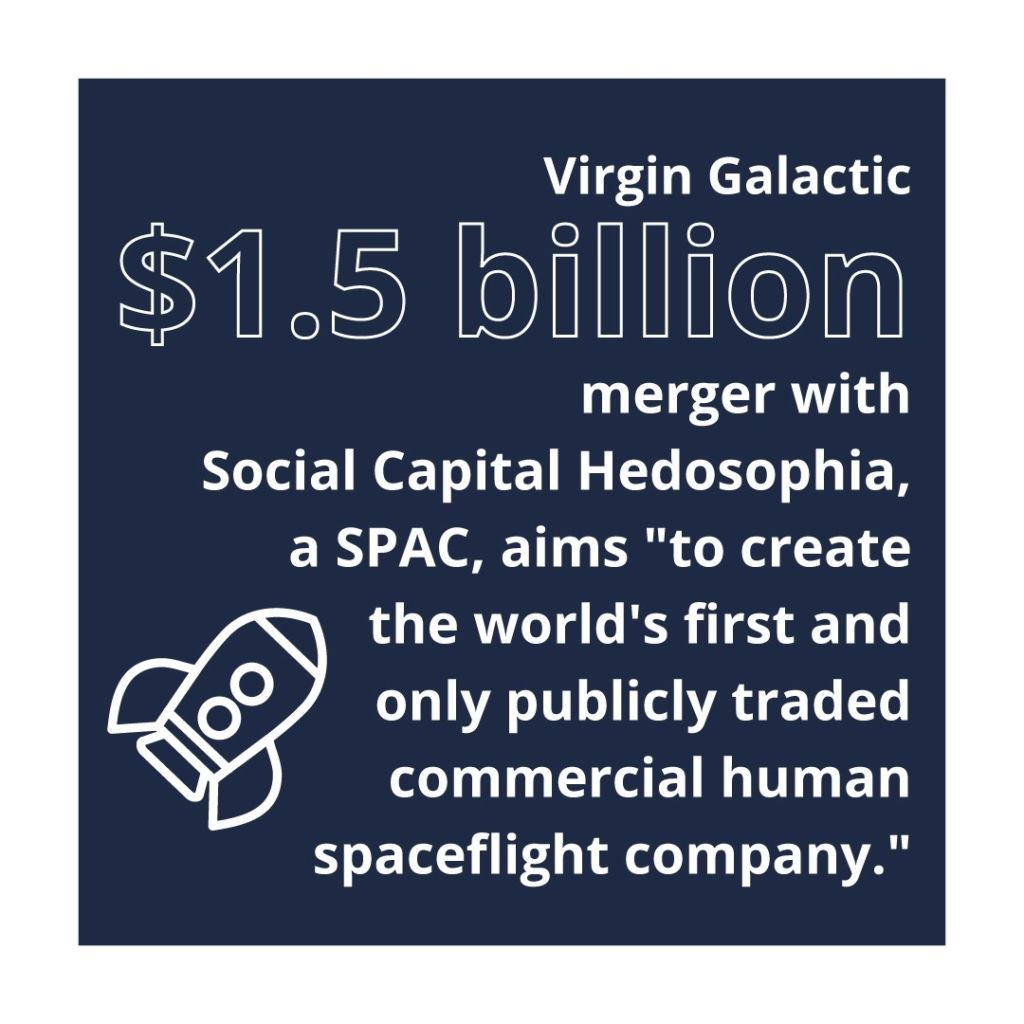 With fame comes money. Having raised substantial funds in the IPO market, SPACs are eager to find profitable acquisition targets. They are also now able to commit acquisition amounts that are large enough and risky enough to require the support of a RWI policy.

The Numbers Speak for Themselves*

Some notable SPACs that have used or are planning to use RWI in their M&A deals include: 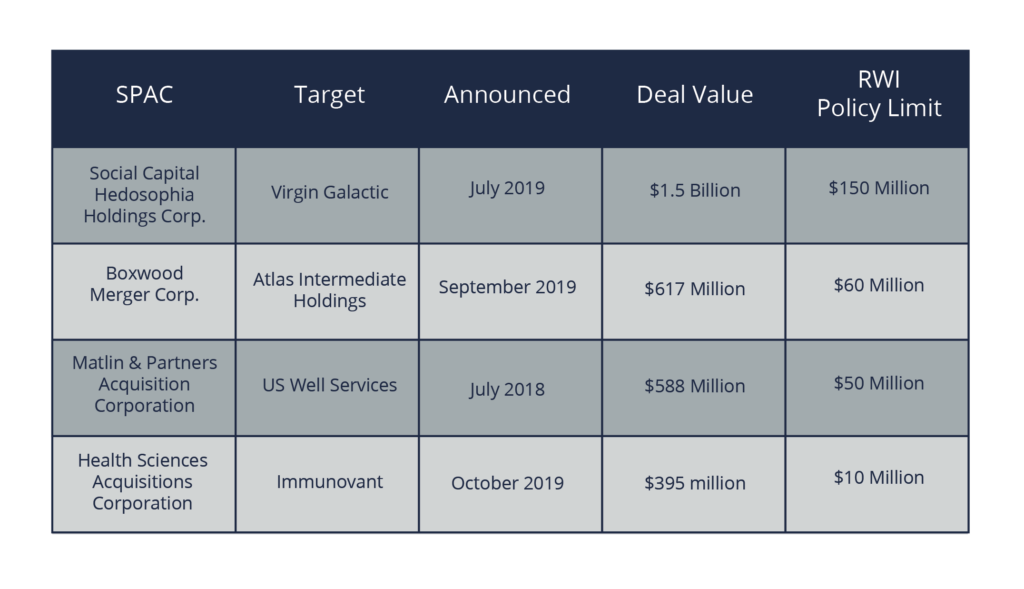 SPACs have not been the only ones experiencing growth and change over the last couple of years. The insurance market, now more familiar with the M&A representations and warranties product than four or five years ago, has also changed and adjusted to consumer demand and competition. It has gone from just a handful of carriers offering the product in 2016 to over 20 insurers competing for the same business in 2019.

Competition and familiarity have significantly driven down the policy premiums from 4%–4.5% of the policy limit bought to 2.5%–3.0%, dipping even lower for larger deals. The retention or deductible built into the policy has been pushed to 1% or just under 1% of the enterprise value of the transaction. The minimum limits required by insurers have gone down as well from $5 million to, in some cases, $2.5 million. Minimum premiums now range between $150,000 to $200,000. Transactions with enterprise value of as low as $20 million are not unheard of.

Insurance carriers are also more efficient in their diligence review process, which allows them to reduce the processing time of the policy to between one and two weeks. In addition, some of the policy exclusions that used to be standard a couple of years ago have been eroded.

All of the above factors point to an opportunity for SPAC management teams to take advantage of the softening in the RWI market. This softening is unlikely to last forever, with some predicting a correction that will likely drive premium prices up and close off some of the policy exclusion windows that have opened up over the last year.

One additional reason why RWI should be on every SPAC management team’s agenda is that it can go a long way towards maintaining and even improving the management team’s reputation. SPAC management teams are often serial players in that they set up a SPAC, go through the IPO and acquisition phases, achieve their investment goals and then go on to do it all over again with a new SPAC. Any tinge of failure makes it harder for the management team to replicate its model or attract future investors. Using RWI to win better acquisition deals allows the managers to deliver better results to SPAC investors, which can in turn boost their reputation and allow them to raise more funds for their next SPAC project.

What Are Our Predictions for SPACs?

For the above reasons and many others, SPAC management teams would be well advised to look into the availability of M&A representations and warranties insurance. Similar to strategic buyers who were skeptical of the product a couple of years ago, but have now realized its benefits, SPAC management teams will be able to derive value and drive development in the SPAC M&A world as they gain a better understanding of how this product can bridge their deal gaps. As some of the more innovative SPAC management teams take advantage of the product, more of them will follow, which, in turn, will allow insurers to adjust the RWI product to better suit SPAC needs.