Since the end of August the property insurance market has seen a stark contrast to the prior historic lows of hurricane activity and industry catastrophic (Cat) losses. Hurricanes Harvey, Irma, Maria (HIM); the Chiapas and Central Mexico earthquakes; the California wildfires; and ongoing storm activity have the industry navigating the prospect of a $100 billion to $120 billion reduction in capital.  Insureds are rightly asking whether carrier rhetoric is signaling a reversal in market cycle. 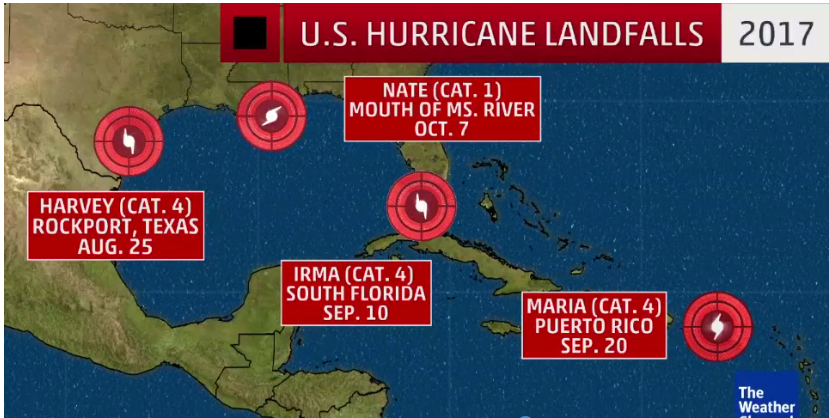 2017 is the first year since 2005 to have a Cat 3 or higher landfall in the U.S. Photo courtesy of weather.com

Pressure from investors and rating agencies led (re)insurers to estimate their total hit while underlying insureds are just beginning to quantify the damage that feed those insurers’ ultimate losses. We should therefore assume a fair amount of uncertainty in both the aggregated industry loss estimate and individual (re)insurer estimates, as these rely on modeleald output, market share assumptions, and early reports from underwriters. Table 1 lists notable announcements to date, with the released estimates totaling approximately $53 billion. This does not include losses from the large mutual property carrier FM Global.

While the majority of estimates are pre-tax, net of reinsurance, and include HIM and the Mexico Earthquakes, there are some reporting inconsistencies in events included and pre/post-tax treatment.

Amidst varying insurer predictions of rate impact, opinions converge on one thing: losing $100+ billion has to mean something to the industry. In order to agree we need the context of the capital base that is said to be impaired.  In January $600 billion was the accepted figure, of which $80 billion was linked to alternative or third-party capital. Using these figures, $100 billion would mean a 17% reduction in available capacity. Spot-checking a few individual reporting (re)insurers and their loss estimates as a percentage of policyholder surplus (PHS), Everest’s losses amount to 15% of PHS, Renaissance Re’s 13%, XL-Catlin’s 11%, and AIG’s 4%. These companies vary in the proportion of property written versus other lines, but suggest palatable losses thus far.  And while Everest has the highest ratio at 15%, its Katrina loss in 2005 was 32% of PHS (using the same metrics of loss/prior YE PHS).

That added context may poke holes at arguments calling for 25% rate increases, but there is more at play here.  Last year Morgan Stanley research estimated that approximately 30% of P&C earnings over the prior 5 years were attributed to reserve releases. Even in the trough of the soft market cycle of the past 3-4 years, (re)insurers were making profit and adding to surplus, albeit at decreasing rates. Through a decade of excess capacity, fierce competition, and declining premium rates and investment returns, historical lows of catastrophic losses perpetuated the cycle.  Capital base impairment, however moderate, may shed light on reserve inadequacy and unsustainable rates leading to solvency issues as perceived by rating agencies and investors.

The impact on commercial insureds will be highly individualized.

While (re)insurers develop their actual losses, assess financial strength, and set strategy going forward, we all face the challenges of an industry in limbo. Immediately following the Cat events, some large property writers had quasi-moratoriums, requiring higher-level sign-off for quotes, leading underwriters to be less aggressive than usual. Knee-jerk reactions by a few domestic carriers and excess and surplus (E&S) catastrophe writers have begun risk-swapping, whereby Insurer A will hike the price on a renewal and lose it to Insurer B, then on a different risk, the roles reverse. For standard property placements, risk quality will trump all else and may allow for competition protecting against significant increases.  Placements relying heavily on facultative coverage should expect challenges as transparency decreases on arm’s length transactions. Incumbent carriers offering rate decreases will be scarce and renewal outcomes will be driven by the number of options explored. Insureds will face difficult decisions if forced to monetize their longstanding insurer relationships.

The best defense against potential hardening will be offense. Insureds and their broker partners should get ahead of potential increases by starting early, producing a robust renewal submission showcasing risk management and risk quality, and scheduling in-person meetings with underwriters to set the tone of the renewal with a clear strategy and goals.

The longer-term view is less clear. If enough (re)insurers have no choice but to write risks at more profitable rates, and enough are willing to lose insureds and watch their book shrink in the meantime, we will see a turn to a hard market. This would signal a momentous change in behavior for all sides of the transaction—underwriter, broker, risk management and finance team—after years of delivering only good news.