Each year, Woodruff Sawyer publishes a year-end analysis of securities class action lawsuits from our proprietary DataBox. For the past several years now, we’ve been reporting record-breaking numbers.

The year 2019 set another record for the number of securities class actions filed against issuers of common or preferred stock listed in the United States: 268. This was up from 223 in 2018.

This all-time high was right on the money with our earlier predictions for 2019. We believe these larger-than-normal numbers are now, in fact, the new normal.

Of course, all the regular offenders made their appearance in 2019 as litigation drivers: missed earnings expectations, accounting issues, and pre- and post-merger matters.

But the newest trend is also one of the most difficult: The filing of Section 11 securities class action suits in both federal and state courts, making up 75 of the 268 class action lawsuits.

As a reminder, in 2018, the United States Supreme Court ruled in Cyan v. Beaver County Employees Retirement Fund that cases brought under Section 11 of the Securities Act of 1933 for material misstatements and omissions in a registration statement could be brought in federal courts and state courts.

The state courts provide a more attractive venue to the plaintiff’s bar versus federal courts for the reasons I’ve outlined in the past.

With this new venue, it’s no surprise that we’re seeing a lot of “parallel filings,” meaning companies are being sued twice, in both state and federal courts, for the same set of allegations.

Twenty-five of the 240 companies sued in a class action in 2019 experienced parallel filings—a 208% increase since 2018.

A Troubling Development: Parallel Section 11 filings in federal and state courts resulted in 208% increase in filings.
**88 Consisting of 19 companies that were sued in both state and federal courts, including one company sued in two separate state courts, and one company that was sued first in 2018 and had its parallel case filed in 2019.

With Section 11 litigation, of course, IPOs are the perfect target, followed by mergers and acquisitions and follow-on offerings (which I discuss in detail here). This increased litigation is having serious negative ramifications for D&O insurance pricing for IPOs. 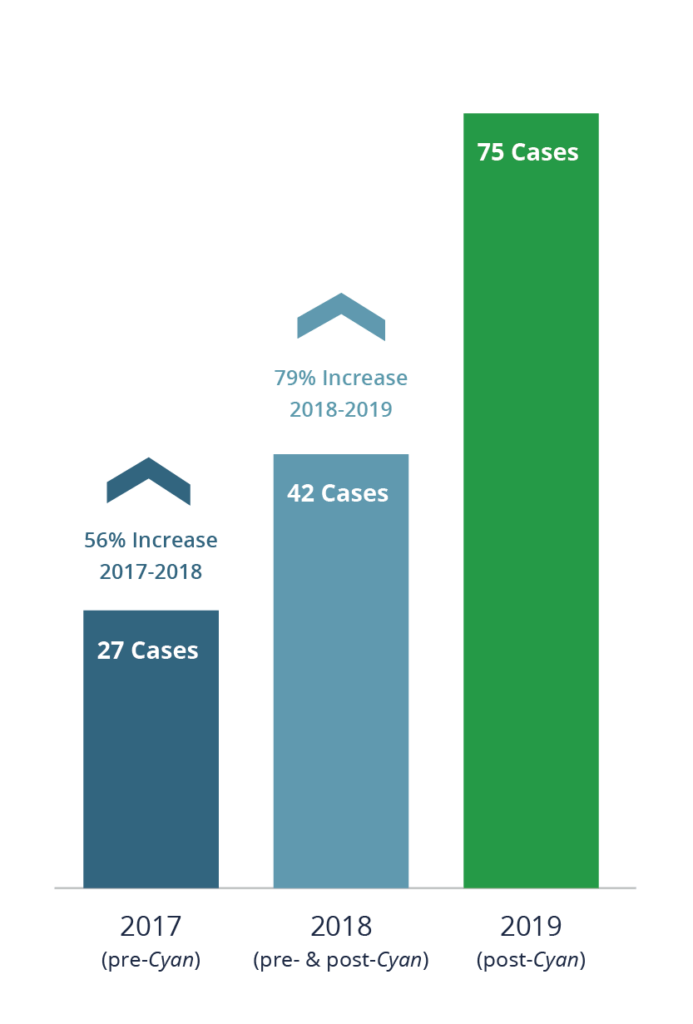 However, there could be a silver lining on the horizon: Federal forum provisions, which a company may be able to put in its charter documents to force all Section 11 suits into federal court.

In 2018, the Delaware Court of Chancery in Sciabacucchi v. Salzberg initially ruled this solution (coined by Professor Joe Grundfest of Stanford University) to be ineffective.

However, this decision is currently under appeal and expected to be decided in the first quarter of 2020. Having gone to Delaware to listen to the appeal in person, I’m cautiously optimistic about the outcome of what is the single-most important case for Corporate America right now.

In addition to providing a lot of information about Section 11 litigation, our year-end report provides other important details about 2019 securities class action litigation:

For more information, including what 2019 litigation can tell us about what to expect in 2020, download your copy of the DataBox 2019 Year-End Flash Report now.