A total of 153 securities class action suits were filed in 2014, making it the third biggest year for filings aside from 2005 and 2007 with 162 and 159, respectively. This is according to Woodruff Sawyer’s Databox Flash Report: “Year-End Securities Class Action.” 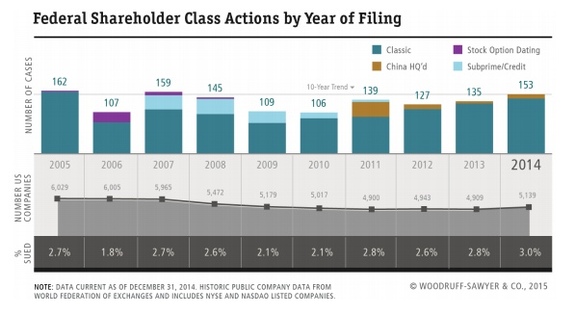 Woodruff Sawyer’s Databox focuses on the high-severity suits filed against public company directors and officers, which are securities class action filings against public companies issuing common or preferred stock. This is different from other reports that include M&A objection suits, derivative suits and government regulatory actions in their data.

Here are some highlights from the report.

The upswing in class action suits in 2014 may be related to the increase in companies that went public in the last few years.  Indeed, 2014 saw the highest IPO filings overall in years. Looking to 2015, it’s likely that IPO companies will be the target of more class actions. 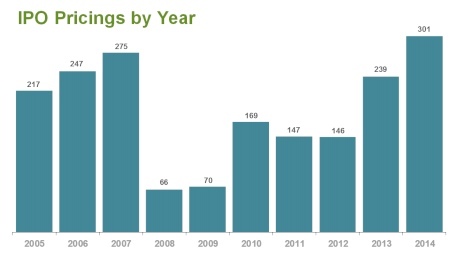 High tech IPOs were the leader in 2014, comprising 33 percent of the total. You may remember a recent post where I outlined the IPO landscape for tech companies and showed that 2014 was a stellar year for tech companies going public. 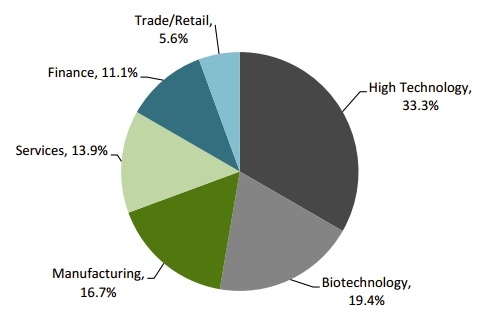 One of the jolting trends we saw in the spring of 2014 was the sudden escalation of pricing for the first few layers of D&O insurance for IPOs, as well as the large increase in self-insured retentions.

This movement coupled with the flight from IPOs by a number of insurance carriers created pricing and retention levels that were eyebrow-raising.

Frankly, it was also possible to be offended if the pricing and retentions were taken to be a reflection of a company’s management team and its future business prospects.

Stepping back to look at the macro-environment, however, provides context for the rate and retention increases.

Consider, for example, that almost one in four companies experiencing a securities class action lawsuit in 2014—a banner year for these types of suits—had been public for less than three years.

The biotech industry saw the most securities class action cases in 2014 with 33 total. The market cap for 12 of the total cases last year was $10 billion or more, but the majority (57 cases) fell into the “under $500 million” category.

However, it was the financial industry that saw the highest settlement dollars at $1.3 billion – 86 percent of which were the settlements for AIG ($960 million) and Fannie Mae ($170 million).

Accounting issues were the top allegation in class actions suits in 2014, followed by product issues and earning issues. 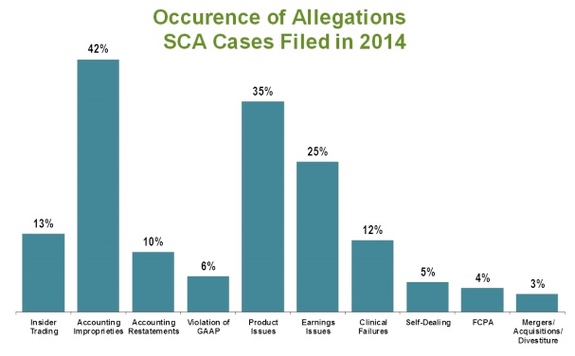 While the number of other issues instigating class actions seems small in comparison, it’s worth noting that the threats are real in the areas of insider trading, FCPA matters and mergers and acquisitions.

For more reading on these matters, see the following posts:

When it came to the Top 10 settlements of 2014, we see the AIG case claiming the No. 1 spot for loss exposure associated with credit default swaps.