Securities class action suits are up approximately 13 percent year-over-year in Q1 2015 according to Woodruff Sawyer’s “Databox First Quarter Class Action Report.” The leader of the pack when it comes to litigation activity is the technology sector; activity in the life science sector, by contrast, dropped significantly compared to the fourth quarter of 2014.

In our year-end review of 2014 securities class actions along with other reports coming from Renaissance Capital, we saw that both IPOs and class action suits against IPOs were on the rise last year.

Renaissance pointed out that the 275 IPOs filed in the U.S. in 2014 made it the most active year since 2000. And, in the years we’ve been tracking class actions, 2014 was the biggest year for something else, too: IPO class actions. 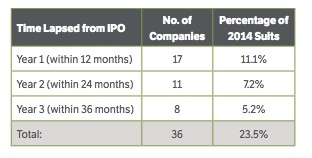 A further review in the latest Databox report for Q1 shows that of the companies that have gone public between 2010 through 2012, 18 percent (on average) are sued within the first three years of going public.

In Q1 alone, 47 percent of companies that were sued were those that had gone public within the last three years.

Looking ahead, it’s likely that the percentage of securities class action lawsuits against recent IPO companies will remain between 10 percent and 20 percent for the next few years.  This prediction is based on the fact that we’ve had so many IPOs in the last few years. While it is true that the Renaissance report says that Q1 is off to a slow start in terms of filings, there have still been a solid number of IPOs in the first quarter of 2015.

It’s interesting to note that 38 percent of suits filed against the 2010 to 2012 IPO companies were related to activities that occurred after the companies went public.

This underscores the need for early stage public companies to aggressively manage and streamline the basic functions of their operations including reporting and forecasting. This is important not just to stave off potential class action suits, but also to avoid penalties from the Securities and Exchange Commission.

As many of us know, the SEC is cracking down on administrative functions in addition to their usual agenda of dealing with fraud and misconduct. That means things as simple as not filing forms on time could assess penalties upwards of $150,000 (and we’re talking fines against individuals, not companies).

We’re very aware that insurance carriers have been taking note of the rise in IPO class actions and risks as well, making it a challenging environment for IPOs with regards to high D&O insurance premiums and higher-than-normal self-insured retentions.

Remember that carriers don’t participate in the upswing of hot IPOs; they only feel the pain when high flyers suddenly experience a precipitous drop in their stock prices.