Woodruff Sawyer’s last “DataBox Securities Class Action” report looked at data from the first half of 2015 and predicted a record year for class actions. Fast-forward to September: the third quarter of 2015 proved to be an action-packed three months with a record number of filings for the year, 48 to be precise.

This brings the total of securities class actions filed in federal courts against public companies by holders of common or preferred stock in 2015 to 131 cases. 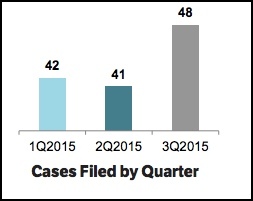 The good news, perhaps, is that we forecast a drop in filings for Q4 between 10 percent and 15 percent. As a historical matter, the fourth quarter is typically a slower quarter for filings. This will, however, still likely put the total number of filings for 2015 higher than 2014 (which saw 153 cases) and may even surpass the record in 2005 of 162 filings.

On the other hand, 22 of the total 48 suits filed in Q3 involved companies that had been public for at least a decade and up to 30 years. Take Volkswagen AG, for example, and its scandal around emissions testing. Or American Express for its failure to disclose in a timely manner the financial impact of losing a deal with Costco.

A total of 17 companies settled class action cases in Q3, which brings the 2015 total thus far to 58 settlements. A majority (59 percent) of these settlements were for less than $10 million; 22 percent settled for more than $30 million. The largest settlement so far this year was by Pfizer, who paid $400 million to settle a securities class action suit related to off-label marketing.

Our end-of-the-year report will cover the 2015 securities class action landscape in more detail. Until then, you can download your copy of Woodruff Sawyer’s Q3 2015 DataBox report here.