In 2019, there were 207 IPOs filed—a robust number, to be sure. Moving into 2020, we should be on track to have another great year for IPOs, particularly given the favorable economy. 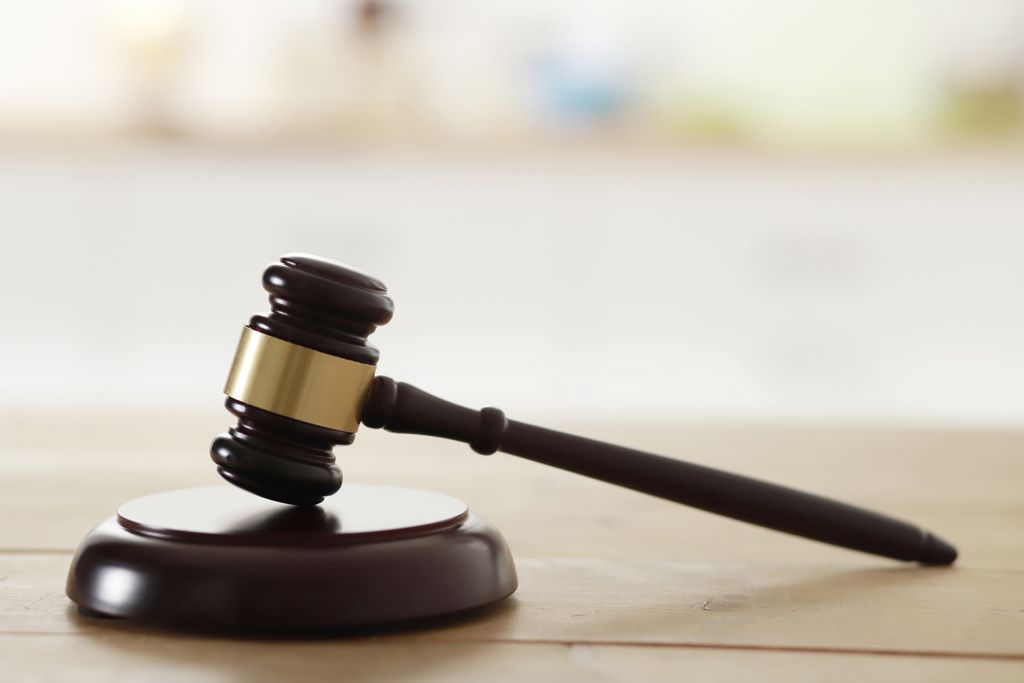 I discussed this issue in a recent CNBC interview, which I’ll unpack more in this article:

The United States Supreme Court ruling in the Cyan, Inc. v. Beaver County Employees Retirement Fund case, in March of 2018, cleared the way for shareholder plaintiffs to bring Section 11 suits in all state courts in the country.

As a reminder, until Cyan, there was a split in the federal courts as to whether suits brought under Section 11 of the Securities Act of 1933 could be brought only in federal court, or also in state courts.

Predictably, the rate at which plaintiffs filed Section 11 suits exploded. The chart below, based on data from Woodruff Sawyer’s proprietary DATABOX™, shows a 79% increase in Section 11 class actions in 2019, compared to 2018. 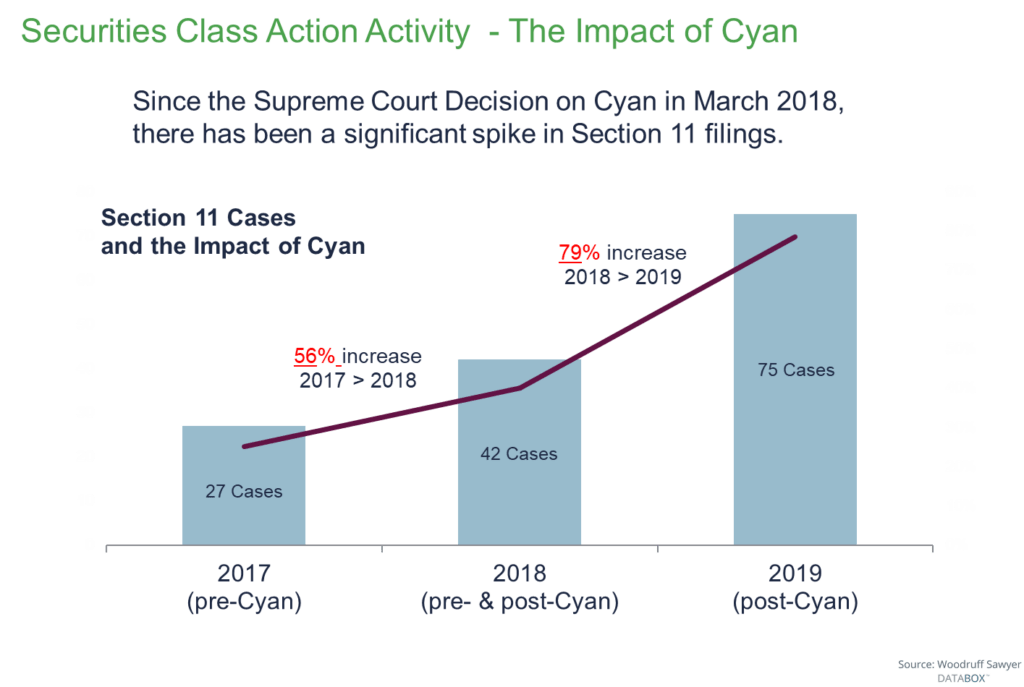 As bad as this is, it is not the big news. The big news from a cost perspective is how many of these suits are being filed in both federal and state courts (as opposed to just federal court).

These duplicative suits are costly because (1) federal and state courts aren’t consolidated, so defendants end up fighting a multi-front war, and (2) state courts have a lower pleading standard and there is no stay on discovery in the early stages like there is in federal court.

Plaintiffs have been nothing but emboldened. In 2018 there were 13 parallel Section 11 filings in federal and state court, where a “parallel case” is a case that has the same defendant company, officers, and directors and is about the same set of facts. 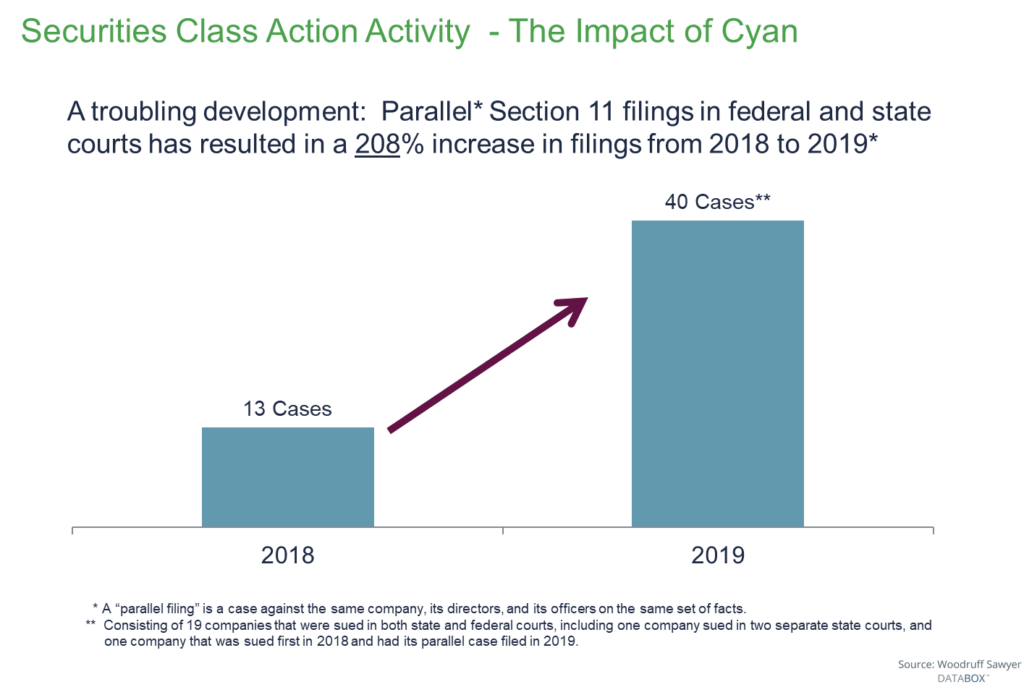 Where are these cases being filed? California has more than its fair share, and we saw plenty of other states like Michigan, New York, Texas, Tennessee, and others.

The plaintiffs’ thinking is, not irrationally, that defendants will be willing to pay larger amounts to settle state court cases given that the cost to defend a case in state court is so high.

Moreover, plaintiffs seem to be taking their time with these cases, possibly to run up the bills. There were only two settlements of state court Section 11 cases in 2018. According to Woodruff Sawyer’s DATABOX™, there are currently 23 open cases in California alone.

The consequence of all of this is increasing premiums for D&O insurance for all companies, with rates and self- insured retentions (like a deductible) for IPO companies. The worst hit are, predictably, life science and technology companies.

The cost of D&O insurance for IPO companies has essentially quadrupled since 2017 (before Cyan) and self-insured retentions have gone up even more.

Thus far, in the first quarter of 2020, quotes for D&O insurance for IPO companies with self-insured retentions of $10 million and $15 million are all too common—even for relatively modestly sized IPOs.

If premium rates for D&O insurance for IPO companies continues to climb, at some point the IPO party stops. Directors and officers potentially face personal liability for Section 11 claims, so it is hard to imagine anyone serving on the board of an IPO company if it did not purchase D&O insurance. On the other hand, the cost of D&O insurance for an IPO company has already become so high that, for some companies, going public no longer makes sense.

When Planning an IPO, Don’t Assume Anything About D&O Insurance Pricing

Companies considering an IPO should talk to an expert D&O insurance broker about the cost of D&O insurance sooner rather than later. Be sure to talk to someone who regularly works with a lot of IPO companies. It’s not enough to talk to a broker that brokers D&O insurance for IPOs only occasionally—the market is far too dynamic for that.

Even folks who were involved in IPOs as recently as last year may be surprised by today’s prices. Without accurate, up-to-date pricing information, CFOs and others risk creating financial models that are wrong.

The last thing a CFO wants is to share flawed financial models with investors in a bunch of testing-the-waters meetings.

It also makes sense to get as smart as possible about the process of obtaining D&O insurance for an IPO, including the various program structures that might make sense in the current pricing environment.

Running a systematic process will optimize the final insurance outcome. Woodruff Sawyer’s publication, IPO Track: Your Guide to Directors and Officers Insurance for IPOs can help.

Given the pricing environment, this is certainly a time to consider non-traditional program structures as well. My article on 6 Ways to Reduce the Cost of Your D&O Insurance Premiums is a good place to start.

What About Non-Insurance Solutions to Address Section 11 Suits?

In order to help protect your organization from Section 11 suits in state court, consider putting a federal choice of forum provision into your certificate of incorporation, noting that it will become effective only if the Delaware Supreme Court agrees that the provision is lawful under Delaware law.

In Sciabacucchi v. Salzberg, the Delaware Chancery Court held that federal forum provisions (also known as the “Grundfest Solution,” forged by Professor Joe Grundfest of Stanford University) are facially invalid, but this ruling is being appealed.

I was in the courtroom for the argument in front of the Delaware Supreme Court on January 8, 2020, and a ruling is expected in 60 to 90 days.

It would be a terrible shame if any company completed an IPO in this timeframe without federal forum provisions, only to have such provisions held valid. It would be like the only house on a street without a “protected by an alarm” sign in front of it.

Here’s an example of federal choice of forum language from the certificate of incorporation of a company that had its IPO after the initial Sciabacucchi decision:

Unless the Company consents in writing to the selection of an alternative forum, the federal district courts of the United States of America shall be the exclusive forum for the resolution of any complaint asserting a cause of action arising under the Securities Act of 1933, as amended, subject to and contingent upon a final adjudication in the State of Delaware of the enforceability of such exclusive forum provision.

Any person or entity purchasing or otherwise acquiring any interest in shares of capital stock of the Company shall be deemed to have notice of and to have consented to the provisions of this section.

Given how high the self-insured retentions are for D&O insurance for IPOs, D&O insurance may not respond for a considerable amount of time after a lawsuit naming directors and officers is filed.

This is exactly the situation in which a director or officer will want to have contractual clarity about when things like legal fees will be advanced.

Of course, not every IPO company will be sued. But the cost of insurance for IPO companies has quadrupled in a short period of time because the rate of litigation—and the cost to settle it—has increased dramatically.

In the current situation, it’s important that companies planning an IPO move every lever possible in order to protect directors and officers and the companies they serve.