Companies doing public offerings now face multi-jurisdictional litigation with no one court able to oversee and control all of the litigation.

Reset of the D&O Litigation Landscape

The litigation landscape reset when the Supreme Court of the United States ruled in Cyan v. Beaver County Employees Retirement Fund that plaintiffs could bring Section 11 suits in state courts and not just in federal courts.

As a reminder, when shareholders sue directors, officers, and the companies they serve pursuant to Section 11 of the Securities Act of 1933, shareholders allege that there were material misstatements or omissions in a registration statement. State courts offer a plaintiff-friendly venue for this type of litigation compared to federal courts.

The Supreme Court decision was welcome news for the plaintiffs’ bar. Post-Cyan, we’ve seen a dramatic increase in Section 11 litigation against IPO companies. As we noted in our recently released 2020 D&O Looking Ahead Guide, Section 11 suits in state court have already increased from 2018 to represent 18% of all suits filed in the first half of 2019.

And it’s certainly not just California anymore, where the phenomena of Section 11 suits in state court first gathered steam. Through the first half of 2019 we’ve seen Section 11 suits filed in seven states (compared to four states in all of 2018). 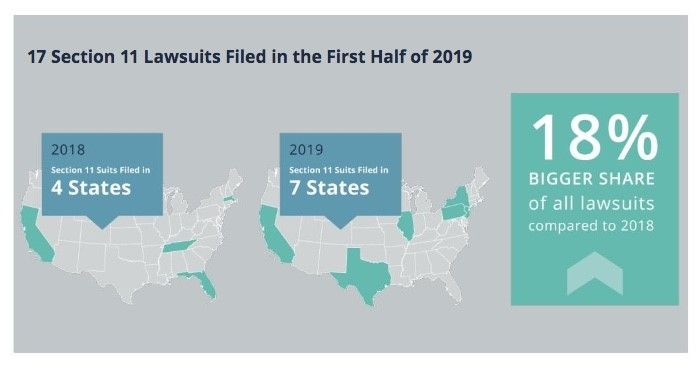 Worse still, we have also seen other types of Section 11 litigation being dragged into state court, for example M&A-related suits involving registered shares.

What Can Be Done? Appealing Sciabacucchi

One of the most promising ideas to address the Section 11 problem was the Grundfest Solution, forged by Professor Joe Grundfest of Stanford University.

The idea was to put in a company’s charter documents (certificate of incorporation or bylaws) federal forum provisions (“FFPs”) to the effect that plaintiffs can only bring Section 11 suits in federal court.

Regrettably, the Delaware Court of Chancery in December 2018 ruled that FFPs were ineffective under Delaware law in Sciabacucchi v. Salzberg. The Chancery Court distinguished FFPs from valid state choice of forum provisions by holding that the latter concerned themselves with internal-affairs claims, while the former improperly implicated external-affairs claims.

Happily, the defendants in Sciabacucchi have filed an appeal with the Delaware Supreme Court.

Supporting the appeal is Professor Grundfest, who willingly acknowledges paternity for the Grundfest Solution. Professor Grundfest has just released a reasoned and detailed paper setting forth why he believes the Chancery Court erred in its decision. It’s worth reading.

Among the points Professor Grundfest makes as to why the Chancery Court erred, he notes that:

One of the very interesting parts of Professor Grundfest’s paper involves a thought experiment that illustrates why, given the same set of underlying facts, labeling the same activities a breach of fiduciary duty suit or a Section 11 claim doesn’t actually transmute the activities themselves. This again underscores the point that FFPs should not have been struck down by the Chancery Court as facially invalid as a result of dealing with external and not internal corporate affairs.

For the sake of companies engaged in capital raising through registration statements, one hopes that the Delaware Supreme Court reverses the holding in Sciabacucchi.

The day the Delaware Supreme Court reverses Sciabacucchi will be a great day—but it will not be the end of the FFP journey. As Professor Grundfest explains, after the Chancery Court is reversed (i.e., FFPs are no longer considered invalid on their face), plaintiffs would still have the ability to challenge a particular company’s FFP in the context of actual Section 11 litigation.

It is to be expected, however, that for the reasons Professor Grundfest articulates in his recent paper, defendants would win this challenge.

Even though FFPs are currently the subject of litigation, it might still be worth inserting an FFP in an IPO company’s charter documents—but with the clarification that the provision will only become effective if there is a final adjudication on the enforceability of the provision.

Professor Grundfest notes in his paper that some issuers took this step after the Chancery Court ruling in Sciabacucchi. Certainly any IPO company will want to discuss the pros and cons of such a step with trusted outside counsel.

When considering the Section 11 problem, many believe that Congress should step in to rectify the situation. I will leave it to readers to determine for themselves the likelihood of this happening in the near term.

Another solution worth discussing is the idea put forth by Boris Feldman of Wilson Sonsini Goodrich & Rosati concerning the slow release of lock-up agreements over time, something I discussed here.

This is potentially a terrific solution, and one that requires the cooperation of the investment bankers banking an IPO deal. One hopes that an issuer with enough market power might be able to persuade the right investment bankers to adopt this solution.

(It should be noted that investment bankers are typically fully indemnified against the costs of Section 11 suits by issuers as part of the terms of the banking deal. This, of course, decreases the incentive of investment bankers to participate in the solution.)

Finally, as of late, there is a new concept in IPO world about federal forum selection provisions being put into the security rather than the charter/bylaws.

In discussing this concept, the law firm Kirkland & Ellis notes that there is good precedent for such a solution. According to Kirkland & Ellis “major depositaries for American Depositary Shares . . . already . . . [include] broad forum-selection provisions in their Deposit Agreements.”

Next Steps for Issuers and Recent IPO Companies: D&O Insurance

A strong issuer may be able to work with its bankers to implement rolling lock-up releases or put federal forum section provisions in the securities to be issued for the IPO.

My sense of the D&O insurance marketplace is that insurance carriers are eager to see issuers attempt to use these sorts of solutions.

Of course, all IPO companies will need to continue to obtain D&O insurance, which is challenging at this time. However, there are a variety of strategies that can be employed to bring down the cost of D&O insurance, as I’ve written in the past .

In all cases, you will want to start your D&O insurance process as early as possible, and work with a broker that has a lot of experience when it comes to D&O insurance for IPOs.