The research is in on what 2013 looked like for public company securities litigation in the United States. Woodruff Sawyer’s annual D&O litigation report is derived from our proprietary Databox.  In the report, we take a deep dive into last year’s litigation in the areas of class action by industry, the settlements, merger objection and derivative lawsuits and more.

In this post, we’ll take a look at some of the highlights.

2013 ended with a total of 135 securities class action cases – an increase of 9 percent over 2012. The following outlines annual filings over the past 10 years, showing a 10-year annual average of 139 cases per year: 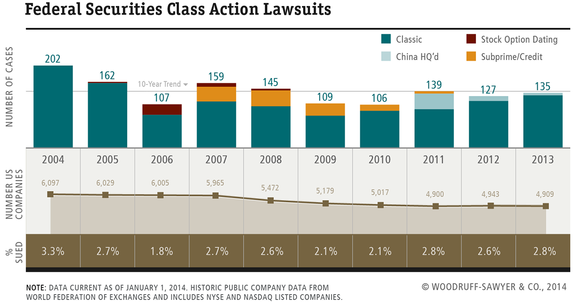 While 2013 wasn’t record-breaking compared to other years, there was a steady pace of case filings. To put it into perspective, the percentage of companies sued has not dramatically changed even though the total number of public companies has dropped approximately 20 percent over the past decade.

Not surprisingly, the high-tech industry garnered the lion’s share of cases in 2013: 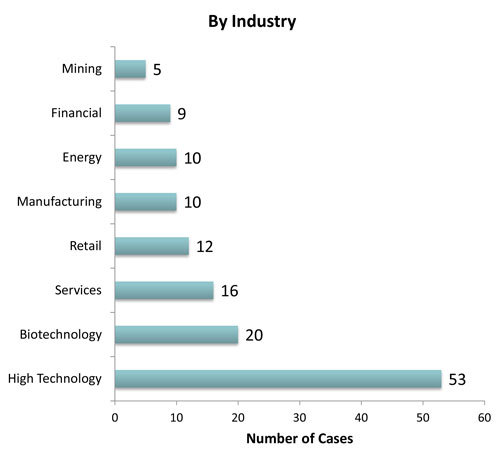 In fact, the percentage of cases in the high-tech industry is climbing back to pre-financial crisis highs at 39 percent in 2013:

The financial industry, however, is experiencing a rapid decline from the 10-year high that occurred in 2008 at 30 percent to just 6 percent in 2013.

The top 3 allegations in 2013, according to our research, were:

There were 83 settlements totaling $2.2 billion in 2013. Sixty-one were settlements made by companies for a total of $1.7 billion. Twenty-four settlements were with auditors or underwriters ($413 million), and settlements with the Securities and Exchange Commission ($174 million).

The majority (77 percent or 62 cases) of settlements came in under $20 million in 2013, as illustrated in the following chart:

In 2013, 240 merger objection lawsuits were filed against 152 companies in federal and state courts. These numbers reflect a 10-percent drop from a high point in 2011 (267 cases against 185 companies).

This data doesn’t mean there isn’t still interest in pursuing M&A litigation, however, in a recent post, I discuss how the tide could be turning with frivolous M&A suits – at least in the state of Delaware.

When analyzing this data, also consider that global deal-making activity fell by 6.2 percent in 2013 compared to 2012.

Where derivative suits are concerned, April 2013 saw the largest derivative suit settlement of the year, with $139 million paid by News Corporation. In this case, shareholders sued directors of the corporation for damages to the company from the illegal hacking scandal and corporate decisions that allegedly benefited Chairman Rupert Murdoch and his family.

2014 will, no doubt, be as interesting as 2013 has been. At Woodruff Sawyer, we are especially mindful of the number of IPOs we’ve seen in 2014 (both that have already gone out this year and that are scheduled to go out this year), as well as the frothiness of the current market.

We are also in an environment where the SEC seems more committed than ever to federal securities law enforcement. Finally, the plaintiffs’ bar may be casting about to replace its efforts vis-à-vis proxy disclosure with something new.

All of this presents challenges when it comes to securing excellent D&O Insurance. Woodruff Sawyer’s Looking Ahead release is designed to help you be ready for your 2014 D&O insurance renewal.

The Databox is Woodruff Sawyer’s proprietary database of D&O litigation. The Databox tracks securities class action litigation filed against public company issuers and their directors and officers. It includes data since 1988.