The past no longer predicts the present when it comes to securities class action suits. In this edition of the D&O Databox Flash Report, we will discuss 2017and contextualize what we are seeing by contrasting it with a 20-year look back on the securities class action litigation environment. We’ve seen changes in the nature of the allegations filed, the companies plaintiffs target, dismissal and settlement dynamics, and even the venues in which cases are brought.

What sets 2017 apart from the others and what does this mean for the coming year?

The short answer to this two-part question is this: what happened in the past is no longer the blueprint for the current environment. For starters, lets take a further look back in time for securities class action filings a 20-year lookback and some notable events during that period:

Changing Allegations. Of course the stock market and legislative activity have impacted SCA filings. More interesting, however, is that the data reveals a shift in the nature of the filing activity. The following chart illustrates the frequency of accounting vs. non-accounting allegations over the past 20 years:

When the accounting scandals of Enron, Worldcom and Tyco led to SOX legislation in 2002, companies found, with the implementation of rigorous internal auditing, that there were material weaknesses and deficiencies in their internal controls that needed to be addressed. These internal control issues made companies vulnerable to SCA suits. 15 years later, accounting issues are certainly still an ongoing concern, but have dropped to a 10-year average of 48% of cases for the recent 10-year period of 2008 to 2017. This is a sharp drop from the previous 10-year average of 76% of cases filed from 1998 to 2007.

As accounting allegations have abated over the last decade, plaintiffs have shifted their focus to other missteps. Specifically, they have filed more cases in the following categories:

This change was noted by Michael Klausner, Professor of Law, at Stanford Law School, and Jason Hegland, Executive Director, Stanford Securities Litigation Analytics in their analysis of class action filings from 2006 through 2015.

Changing Nature of Plaintiff Targets. The make-up in companies being sued has also changed:

It should be noted that some of this movement may be attributed to the growth of stock values of established companies and the increased M&A activity in the last 10 years.

Change in Dismissal and Settlement Dynamics. In addition to the shift in types of allegations, types of companies and size of companies sued, there has also been a shift in settlement and dismissal rates as illustrated below: 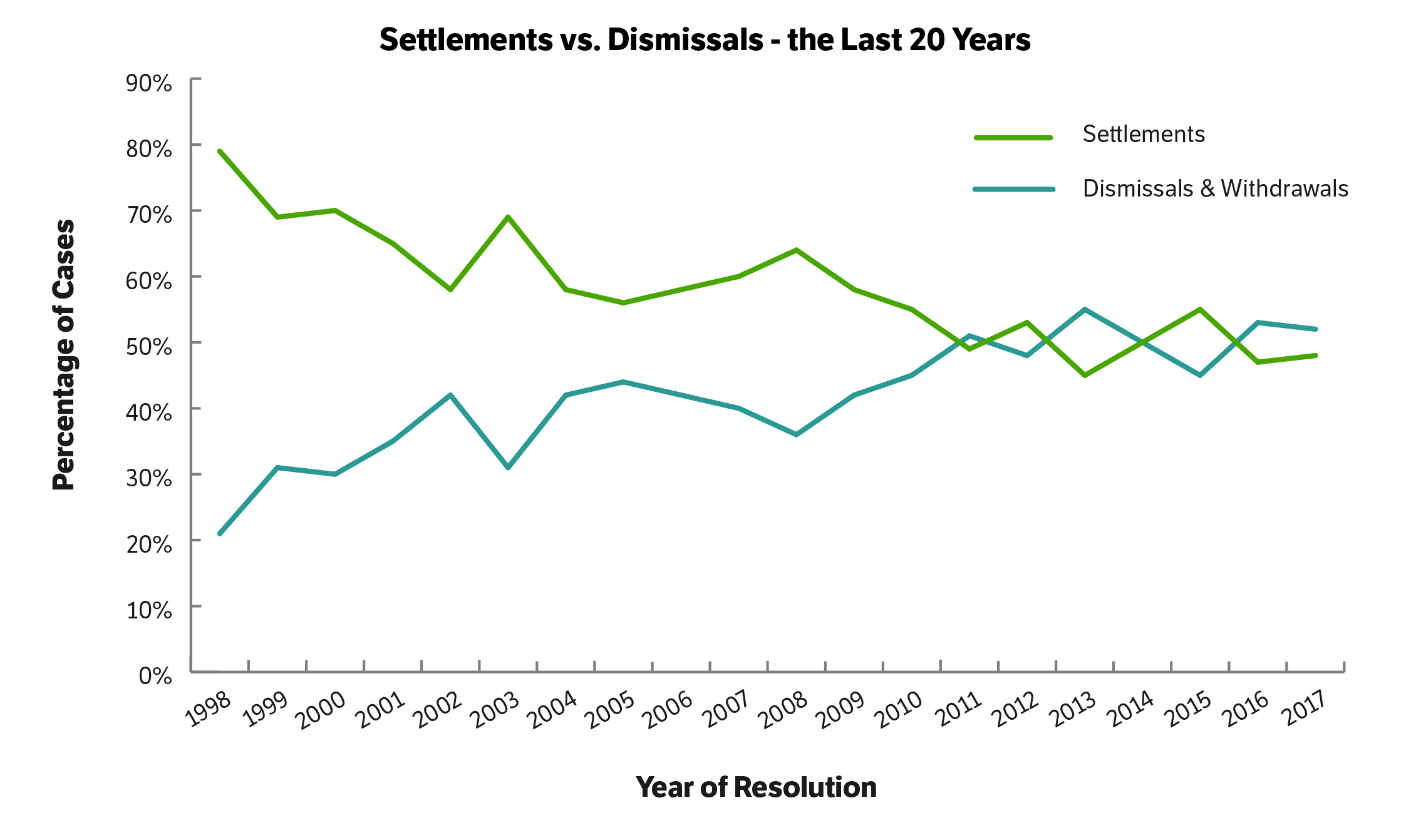 Settlement and dismissal rates in the last seven years have converged, as opposed to the previous 13 years in which settlement rates were always higher than dismissal rates. There are various factors that have contributed to this change, but the primary factor appears to be accounting allegations. In the past, such cases were more likely to result in a settlement than a dismissal due to the likelihood that audit investigations and/or the discovery process revealed accounting fraud or missteps. As accounting issues have abated, so has the rate at which securities class action cases are settled.

However, in the last 10 years, while settlement rates went down, the median and average cash settlement amounts went up:

Additional Venue. It is also worth noting that in the last decade, shareholders have been actively suing in state courts as well:

The bottom line? SCA filing activity is up, and SCA claims currently have an almost 50/50 chance of being settled vs. dismissed due to the nature of the allegations, with settlement amounts on average higher than the previous 10-year period. Shifts in company industry, location and size have also factored into the rise in filings. Add to this the additional state court activity described above, and the result is a very frothy environment for D&O litigation. While we currently do not anticipate that SCA filings in 2018 will exceed the total number of filings in 2017, we do believe that overall litigation activity will continue at a brisk pace. 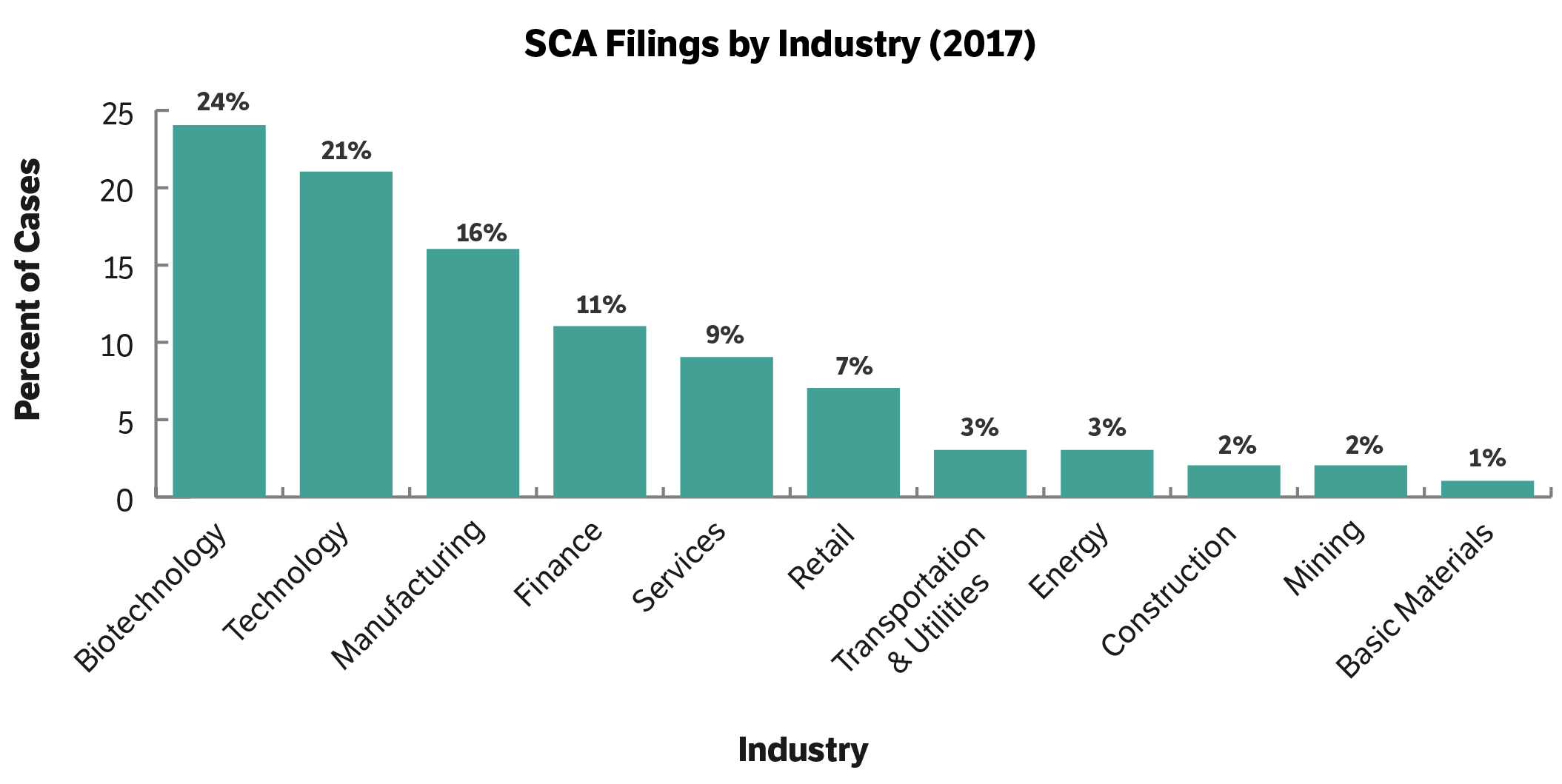 There were fewer large dollar settlements in 2017 causing a drop in the median and average. 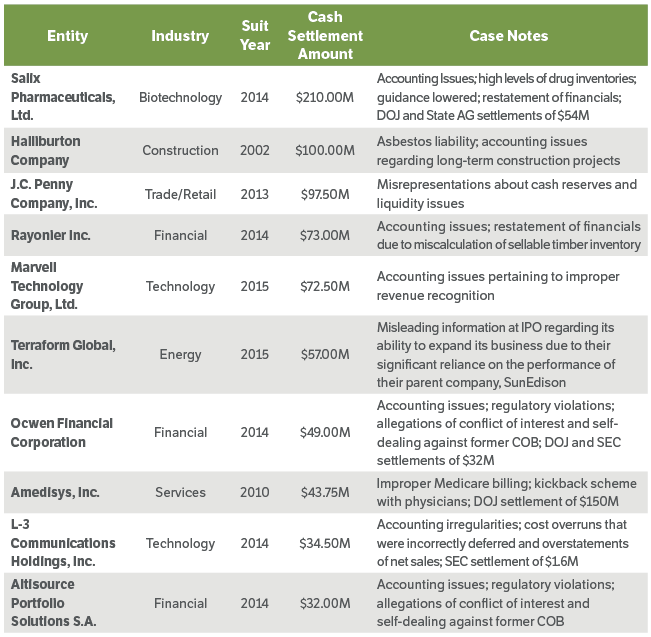 For More of the Latest News

We invite you to subscribe to our blog as an additional resource for staying informed on current news and events as it pertains to D&O liability. D&O Notebook: Directors & Officer Liability Blog focuses on D&O liability insurance and corporate governance matters, including ways to reduce exposure to shareholder lawsuits and regulatory investigations.

Recent blog posts that may be of interest to you:

About the D&O DataBox

1For purposes of tracking issuer-related securities litigation, the D&O Databox focuses exclusively on securities class action lawsuits against public companies by holders of common or preferred stock for which there was a decline in stock price.