We’re just past the half point in the year, and 2017 is on track to be record-breaking when it comes to securities class action suits. Through the first half of 2017, we’ve seen 126 securities class action filings, according to Woodruff Sawyer’s DataBox™ “Mid-Year Securities Class Action Report.” Indeed, the first quarter of the year experienced a 132 percent increase over the 10-year average. 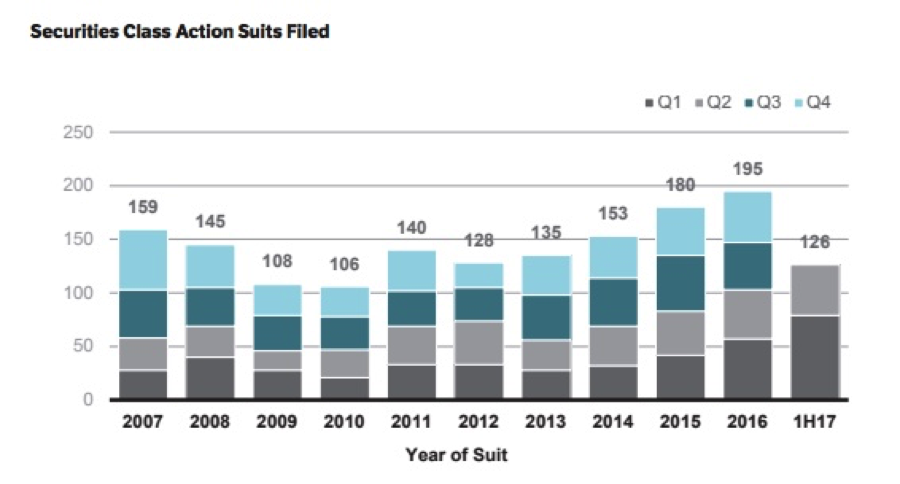 I’ve mentioned before in earlier D&O notebook posts that IPO companies continue to be the target of securities class action suits for a variety of reasons, ranging from strict liability for material misstatements and omissions in their S-1 Registration statements to the challenge of learning to operate as public company.

Woodruff Sawyer’s most recent research shows that 40 percent of the companies sued through the first half of this year have been public for five years or less.

However, smaller market cap companies of $1 billion and less make up nearly half of the companies sued (47 percent).

It’s worth noting that we’re seeing smaller plaintiff firms get in on the action, too. They seem to be focused on suing smaller public companies. In a previous post I wrote on securities class actions 101, I mentioned that all notices of investigation from any law firm should be taken seriously. The fact that you are being investigated by a smaller, lesser-known firm might be an indication that the potential lawsuit is a less robust one, but you’re still going to want to pay close attention.

In the first half of 2017, companies in the biotech sector surpassed the technology sector in terms of the volume of class action filings:

We’re also seeing the plaintiffs’ bar bring a substantial number of suits against foreign companies (headquartered outside the US)—29 companies as of mid-year experienced a securities class action suit, making up 23 percent of companies sued.

For more trends in securities class actions, download your copy of “Mid-Year Securities Class Action Report,” where you can find out: