One of the most challenging sectors when it comes to public company director and officer liability risk is the life sciences/biotechnology space. Understanding the dynamics goes a long way to being able to mitigate risk.

It’s indisputable that life science companies experience some of the highest frequency rates of all industries when it comes to securities class action lawsuits.

In 2016 alone, according to Woodruff Sawyer’s proprietary database, the D&O Databox, there has been a 24 percent increase in securities class actions against biotech companies:

This industry is also getting a lot of attention in 2017. Twenty-three cases have been filed against biotech companies in the first quarter, surpassing filings against technology companies, an industry that is historically the leader in total annual filings.

Biotech also tops other sectors for the largest settlement payouts of 2016 with four of the big pharma companies paying out approximately $1.6 billion of the $1.8 billion:

Of course, plaintiffs don’t automatically receive a fat settlement just because they filed suit. In some cases, defense counsel will be successful in getting plaintiffs to withdraw their suit.

In other cases, defendants will win when the court grants the defendant’s motion to dismiss. This is an effective procedural move in federal court because of the heightened pleading standard that plaintiffs must meet to state a good claim.

When a court grants a plaintiff’s motion to dismiss, the court is saying that it agrees with the defendant’s contention that the plaintiffs failed to state a proper claim.

The court can grant such a motion without prejudice, which means that the plaintiffs can amend their complaint and file again. There can be a few rounds of this before a court finally grants a motion to dismiss with prejudice, meaning that plaintiffs are not able to amend and refile their suit.

The Odds of a Motion to Dismiss

In the last 10-year period, approximately 51 percent of all biotech cases were dismissed (74 of 146 cases).

When we look only at biotech cases with allegations specifically related to clinical trials (with a market capitalization of $0 to $10 billion) the overall rate of dismissal was 49 percent for the period from 2006 through 2016.

From our analysis, we found:

In other words, life sciences companies that are sued have about a 50 percent chance of winning on a motion to dismiss.

All dismissed motions, however, are not created equally. Some can be handled in a very efficient way. Others will require that your outside counsel go to the expense of conducting some internal investigations to truly understand the big picture.

As a result, the cost to write a motion to dismiss will vary depending on the facts at hand. For example, companies that only have one product in the pipeline and no products in the market are less complex—and would usually be much easier to defend—than more mature companies.

It’s also the case that active litigation drains management focus and time, something that is costly to the business as well.

What happens to cases that survive the motion to dismiss?

These cases are technically on track to go to trial. I say the word “technically,” however, because trials are so rare. In the past 10 years (2007 to 2016), there have been a grand total of 1,449 securities class action lawsuits, according to the D&O Databox. 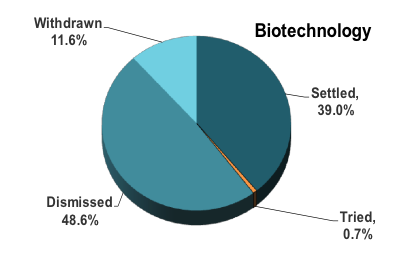 The Cost of Settlement

Cases that survive multiple rounds of motions to dismiss enter a phase of more serious settlement negotiations between the plaintiffs and the defendants. These are the stronger cases, and as such, their settlement value is higher than that of a more frivolous case.

For the 10-year period ending in 2016, the average settlement in the biotech sector was $44.1 million. The median settlement was $8.2 million.

It’s important to remember that settlements tend to be correlated with market cap loss. This means that, as a general matter and all else being equal, larger companies tend to have larger stock drops as a function of absolute dollars. This tends to result in larger settlements compared to those of smaller companies.

5 Steps to Mitigate the Risks of Securities Class Actions

Life science companies perform a very important function for our society, and their importance should not be understated. As a practical matter, there are many protections available to directors and officers of these companies that are designed to let them feel confident about their ability to work at life science companies without putting their own finances in peril.

Work with seasoned counsel when it comes to corporate disclosure issues. Securities class action suits must contain as an element an allegation of a material misstatement or omission. Thus corporate communications, especially the types of communications made to investors in filings with the Securities and Exchange Commission and on analyst calls, must be thoughtful, complete and not misleading.

Experience counts for a lot when it comes to disclosure for life science companies; practices are constantly evolving, and skilled in-house counsel does well to consult with experienced outside counsel for particularly tricky issues.

All life science companies will want to establish a disclosure committee that has the formal role of reviewing information, both to make sure disclosure is made timely and that disclosure is done in an effective and complete way.

Ensure you have a corporate communications policy. In addition to disclosure, it’s important that corporations are mindful of things like Regulation FD and other constraints on how sensitive corporate information can and cannot be shared.

Policy training for all employees is equally important—and don’t forget to consider social media when you’re thinking about your corporate communication policies and strategies.

Verify you have a robust, up-to-date insider trading policy. As a reminder, unfortunately timed trades—that is, selling stock when the price is high and shortly in advance of corrective disclosure that causes the stock price to fall precipitously—can be held up as evidence of a intent to engage in wrongdoing.

One of the reasons insider trading policies should be taken seriously is to ensure that there’s no sloppiness in this area.

Clearly, given the stakes involved, any director or officer of a life science company should expect to receive an indemnification agreement.

While this article has focused on securities class action lawsuits, directors and officers of life science companies also have to be thoughtful about the risk from government regulators, both foreign and domestic, as well as other risks.

Well-drafted indemnification agreements help clarify everyone’s expectations when it comes to the advancement of legal fees and the payment of settlements.

D&O insurance is the safety net for directors and officers when it comes to securities class actions and other types of claims that can be brought against them.

You’ll want to, of course, work with a skilled broker in this space to ensure that the policy covers the wide variety of risks that are faced by directors and officers of life science companies—both when it comes to policy terms and conditions, as well as the limits of insurance that you purchase.

Working with a broker who is experienced with and understands the biotech space will go a long way to ensure that your business risks are being appropriately mapped into your insurance risk management program.

A seasoned broker with good data—and a strong amount of public company life science/biotech experience—will also be effective in helping to optimize your company’s self-insured retentions (like a deductible) and premiums.